Decisive differentiation can be compelling to investors. But is it possible that refusing to follow your rivals into a new, proven opportunity takes the idea of differentiation too far?

It’s a question Molson Coors (NYSE:TAP) (NYSE:TAP.A) shareholders will be forced to contend with sooner rather than later. The company’s CEO Gavin Hattersley made clear last week when he said beer — and not hard seltzers — would remain the organization’s priority going forward.

It matters simply because hard seltzers have been driving the bulk of the growth within the alcoholic drinks market of late. In 2019, the United States’ hard seltzer revenue soared 212% year over year. Overall beer sales have been in a slump, in fact, with volumes from major names like Coors and Anheuser Busch Inbev (NYSE:BUD) brand Budweiser slipping 4.1% in 2019, according to numbers from market research firm Nielsen.

In other words, Molson Coors shareholders are (perhaps unknowingly) making a big bet that seltzer mania will subside and that Coors and Miller brands will buck the bigger beer tide. 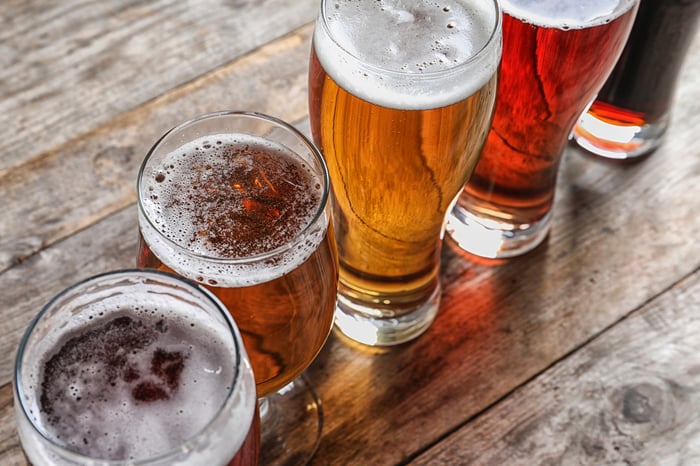 “This notion that a lot of the seltzer volume is coming from premium light is not necessarily supported by the facts that are underlying the Miller Lite and Coors Light’s performance,” Hattersley explained during Molson Coors’ fourth-quarter conference call last week.

Specifically, he detailed “Coors Light gained segment share for the third straight quarter” and that Miller Lite “gained [market share] its 21st consecutive quarter and it actually grew STR [sales to retailers] volume in Q4 in the face of this seltzer trend.”

The numerical data isn’t in dispute. Anheuser Busch brands like Budweiser and Michelob, along with sales of craft beers made by the likes of Boston Beer Co. (NYSE:SAM), have been and continue to lose more than their fair share of the beer market.

In fact, Boston Beer chairman Jim Koch insists, “hard seltzer is pulling from hard liquor and from wine,” jibing with Hattersley’s assessment and implying Molson Coors shareholders have little to worry about.

The underlying numbers leading Koch and Hattersley to their common conclusion, however, may be short-sighted in more ways than one.

Splitting hairs to support a story

To the company’s credit, Molson Coors has improved market share in the face of the hard seltzer headwind. That may not be the case into the future though, given data from alcoholic drinks brand Mark Anthony. Its White Claw brand is the hard seltzer market leader by a country mile, boasting more than half the market, according to UBS, (versus the distant-second Truly brand from Boston Beer with its control of just a little more than 30% of the market). Mark Anthony reports that 40% of its customers were wine and spirits consumers, while the other 60% were beer drinkers. Specifically, 31% of White Claw fans are/were reportedly “premium light” drinkers of beer, wine, and spirits.

It’s conceivable that the entirety of 2019’s $1 billion-or-so worth of hard seltzer revenue in the United States didn’t siphon off any Coors or Miller customers — conceivable, but not likely.

More realistically, Molson Coors lost fewer beer customers to the fast-growing alternative than its beer-making rivals did. Mark Anthony’s data also begs the question as to what Hattersley meant exactly by “premium light.”

Regardless, even if Molson Coors has fared better than the rest, that may not be the case through 2020 and into 2021. UBS believes the hard seltzer market will expand to $2.5 billion by 2021. Those consumers are going to come from somewhere. An already-weakened beer industry is vulnerable, including the strongest names in the business.

Will it be enough?

And there’s the rub for Molson Coors investors. It will launch a new hard seltzer called Vizzy next month, adding it to its existing play called Henry’s Hard Sparkling Water. Hattersley claims “this is going to be our biggest bet yet on the hard seltzer segment.”

That’s not saying much, however, given how inconspicuous Henry’s Hard Sparkling Water has been within the segment despite Molson Coors’ deep marketing pockets. Rather, the company’s chief made clear during its quarterly earnings call that beer remains the priority. He commented, “We believe that our marketing [of Miller Lite and Coors Light] is resonating. We’re going to put more effort and money behind that at the same time as we are going to enter the seltzer category.”

It may end up being a brilliant bet, even if hard seltzers grow as much as expected. While they’re growing much faster than beer, hard seltzers only make up about 3% of the nation’s alcoholic beverage market, whereas beer accounts for roughly three-fourths of it. There’s just more money to be made in brewing.

Investors respond to stories, though, and think in relative terms rather than absolute terms. If Hattersley’s intuition is even just a little off base, it could mean trouble for the stock.