House Speaker Scott Saiki unveiled a proposal Monday that would potentially fund teacher pay raises by giving the state Board of Education joint authority with counties to levy property taxes.

House Bill 2671 is a proposed constitutional amendment that would go before voters on the 2020 general election ballot if approved by the Legislature.

Voters would be asked whether the Hawaii Constitution should be amended by repealing the counties’ current exclusive jurisdiction over real property taxation and giving concurrent jurisdiction to the Board of Education and counties.

“The general public and business community must weigh in on whether taxes should be raised to increase teacher salaries, and, if so, whether a real property tax is an appropriate source of revenue,” Saiki said in a statement. 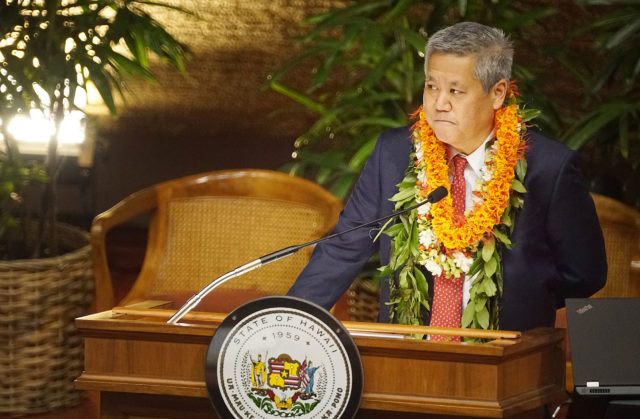 House Speaker Scott Saiki says the proposal would allow citizens and business to weigh in on whether property taxes should be used to fund increased pay for teachers.

The measure is reminiscent of the 2018 constitutional amendment backed by Hawaii State Teachers Association, the teachers’ union, that would have given the Legislature authority to impose a surcharge on investment property to support public education.

While the Legislature eventually voted to approve the so-called Con Am, the counties, led by the City and County of Honolulu, mounted a legal challenge that resulted in the ballot question getting stricken by the Hawaii Supreme Court for being too vaguely worded.

House Speaker Sylvia Luke is listed as a co-introducer of HB 2671. She could not immediately be reached for comment. Additionally, Honolulu Mayor Kirk Caldwell’s office was not immediately available for a comment.

Corey Rosenlee, president of the HSTA, noted in an emailed statement that giving boards of education taxation authority is common across the country and how many public school systems are funded elsewhere.

“We appreciate legislators trying to adequately fund our schools and HSTA will have to research whether this proposal has enough popular support to be approved by voters,” he said.

Board of Education Chairwoman Catherine Payne said the board’s legislative committee is working on written testimony.

“I think this is an opportunity to further discuss the critical need for additional funding for schools and teachers,” she said.

The Board of Education sets statewide policy for the Department of Education. Its nine members are appointed by the governor.

Funding increased teacher pay is an issue that is front-and-center for the Legislature this session. There are two major proposals on the table to address paying teachers adequately to prevent attrition and reduce the teacher shortage.

One of those proposals would pay special education and Hawaiian immersion teachers, as well as those in remote, geographically hard-to-staff areas, a salary differential to retain more of them.

The teacher differential revenue for the rest of this school year until June is included in Gov. David Ige’s supplemental budget request to the Legislature. The DOE’s proposal continues these pay incentives next fiscal year and would have a price tag of around $26 million.

The other proposal floated by DOE and the HSTA would give many veteran teachers in Hawaii a pay adjustment by placing more weight on years of service like their counterparts in other school districts around the country. The veteran teacher pay adjustment is estimated to cost around $45 million.

Sign up for our FREE morning newsletter and face each day more informed.