Welcome to the Washington Free Beacon’s morning newsletter, your comprehensive briefing on the Enemies of Freedom. To get this newsletter sent straight to your inbox every morning, sign up here.

SMALL TEEPEE … “‘Didn’t answer the second part of my question’: Pete Buttigieg grilled by anti-abortion Democrat,” via EXAMINER: “The Democratic platform contains language that basically says that we don’t belong, we have no part in the party because it says abortion should be legal up to nine months; the government should pay for it. And there’s nothing that says that people that have a diversity of views on this issue should be included in the party,” [said Democrats for Life president Kristen Day] …

David Rutz breaks down the most important news about the enemies of freedom, here and around the world, in this comprehensive morning newsletter.

“I support the position of my party that this kind of medical care needs to be available to everyone,” Buttigieg said … “And again, the best I can offer is that we may disagree on that very important issue, and hopefully we’ll be able to partner on other issues.”

BRUSBAND UPDATE … “FBI reviewing claims Ilhan Omar married her brother,” via NY POST: Two FBI agents held an hours-long meeting in Minnesota in mid-October with a concerned party who handed over a trove of documents regarding Omar’s 2009 marriage to Ahmed Nur Said Elmi, a source with knowledge of the event said …

If Omar did marry her brother, she could be found guilty of committing marriage fraud — a felony offense punishable with a prison sentence of up to five years and a fine of up to $250,000.

ON MESSAGE? … “Hillary Clinton Premieres Hulu Doc at Sundance and Addresses Those Bernie Comments,” via THR: Asked why she felt it was important for her to speak out about the current Democratic candidates and what she wanted to convey with her comments on Bernie [Sanders], Clinton replied: “Well, you know, I shot that interview probably a year and a half ago, and I didn’t think about the election. I’ve made it very clear that I will work hard for whoever our Democratic nominee is.” …

The audience—which included Gloria Steinem—cheered for Clinton’s key milestones and passionate speeches during the screening, and there was applause for when Barack Obama appeared in the film. As viewers watched the events of the 2016 play out again towards the end, many audience members had tears glistening on their faces.

WHERE’S HUNTER’S FATHER? … “Biden leaves voters and reporters hanging during swing through N.H.,” via POLITICO: [Joe Biden] made no mention of the state’s opioid epidemic, which polls consistently show is the biggest issue facing the state. Voters at the events said they also would have liked to hear about his plans for health care, the cost of prescription drugs, and the economy …

Biden’s decision to skip q-and-a’s left some people in the audience disappointed. At a packed event at an elementary school in one of the most Republican areas of the state, a number of topics voters said they would have liked to hear about went unaddressed.

Congresswoman Tlaib then retweeted the Ashrawi tweet that included the allegations.

However Ashrawi apologized for her tweet. “My apologizes for retweeting something that’s not fully verified. It seems that the news of his being kidnapped is not certain.” She also tweeted other clarifications and then appeared to delete the tweet. Tlaib’s retweet was also thereafter deleted but she did not apologize for spreading the false information.

POCAHONTAS INSPIRES HER RIVALS … “Joe Biden Lied About His Record On Social Security,” via INTERCEPT: Biden, when he acknowledges his past support for cuts, portrays the advocacy as deep in the past. But a close inspection finds reams of more recent evidence of Biden’s support for cuts—including in Biden’s recent recounting of a conversation he had with China’s president, Xi Jinping, and in his choice of Bruce Reed, a longtime deficit hawk, as a senior policy adviser in his current presidential campaign …

A review of media reports from the 1990s shows that groups dedicated to protecting Social Security, including the AARP, saw Biden’s votes and advocacy as a betrayal.

REALITY BITES … “CNN’s Axelrod says impeachment didn’t come up until 80 minutes into focus group,” via THE HILL: Former Obama chief strategist David Axelrod said he attended a focus group with Democratic voters in Chicago on Friday, describing the gathering as “chilling” because impeachment “didn’t come up” until more than an hour into the session despite it taking place amid the Senate trial of President Trump.

CHICOM CONTAGION UPDATE … “China Urges Calm Over Virus During ‘Critical Period’,” via WSJ: “We are now in a critical period of prevention and control,” Ma Xiaowei, head of China’s cabinet-level National Health Commission, said at a press briefing in Beijing on Sunday to deal with the unnamed coronavirus that has infected more than 2,000 people and killed at least 56, the vast majority of them in central China’s Hubei province …

In an unprecedented move, officials have locked down several cities in Hubei, including Wuhan. But the cities weren’t sealed off until after millions of residents had scattered to visit family for Lunar New Year.

SEND THE BOMBERS … “Trump Admin Reconsidering U.S. Aid to Hezbollah-Controlled Lebanon,” by WFB’s Adam Kredo: The State Department’s concession to Congress that it would commit to halting financial aid to Lebanon if U.S. taxpayer dollars go to Hezbollah is now being brought to the forefront. That guarantee from the State Department is fueling a growing push to freeze all aid in light of Hezbollah’s unprecedented takeover of the Lebanese government, sources confirmed.

Sen. Ted Cruz (R., Texas), who has led a battle on Capitol Hill against unconditional assistance to Lebanon, recently wrenched promises from the administration to halt the aid if it is shown Hezbollah is the beneficiary, according to U.S. officials familiar with the matter.

In November, she told a school-choice activist in Atlanta that her children didn’t go to private schools, but the next day her campaign told a different story—that her son transferred to a private school after facing difficulty in a public institution.

That admission came after a yearbook, obtained by the Washington Free Beacon, showed that during the 1986-1987 school year, Ms. Warren’s son Alex attended Kirby Hall, which currently charges nearly $18,000 per year for tuition.

TWITTER TRIGGERED … “Twitter Attaches Warning to Trump Campaign’s Pro-Life Video,” by WFB’s Bill McMorris: Hours before Trump [became] the first sitting U.S. president to attend the annual March for Life, his official campaign account posted a video showing couples with newborns and a pregnant woman looking at an ultrasound of her baby …

The video was flagged as containing “sensitive material,” despite showing no sexual, violent, or hateful imagery. 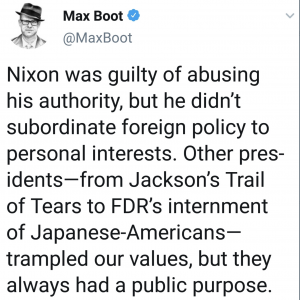 WON’T SEE THIS ON RELIABLE SOURCES … “CNN Blames Bar Shooting on Lax Gun Laws. It Got The Facts Wrong,” by WFB’s Collin Anderson: A CNN article on a recent Kansas City bar shooting mischaracterized the shooter’s criminal history to blame the killing on Missouri’s gun laws.

Police identified 29-year-old Jahron Swift as the shooter who killed one woman and injured 15 before he was killed by an armed guard January 19. CNN published a report Wednesday saying Swift likely would have gone to prison over a weapons charge if not for the state’s 2017 permitless carry law. However, the report obfuscated the date of Swift’s charge to suggest the law let him off the hook for it.

“You know who really doesn’t have it? Joe Biden.” —Former President Barack Obama

Thanks for reading! Send tips to [email protected].