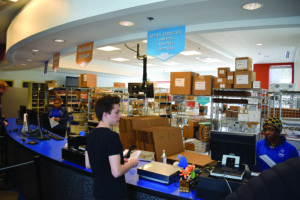 Emory Resident Hall Association (RHA) hosted its first focus group on Tuesday to hear student concerns with the current mailing system amid the University’s search for a new mail vendor.

A handful of freshmen and sophomore students discussed ideas of mailroom lockers for students, extending mailroom business hours to the weekends and general inconsistencies with package notifications. According to Jordan,  a series of focus groups targeting each year aims to inform potential mail vendors on what to expect when proposing a new contract.

“We want to make sure that the next vendor we choose … is capable of accommodating for the wants of the students,” Jordan said.

According to Jordan, the idea of including student voices in the contract-making process is novel and is one that was spearheaded by Emory Director of Business Services Jim Klein, who did not respond to the Wheel’s request for comment by time of publication.

The University generally agrees to a five-year contract with businesses that would oversee all mail delivery to Emory entities including the Student Activity and Academic Center, the Few Mail Center, Emory University Hospital and all offices affiliated with Emory Healthcare, according to Jordan.

Jordan also stated that the contracted business also oversees the staffing and training of employees at these mail distribution centers.

Emory’s current contract with Ricoh, a multinational imaging and electronics company, has been renewed twice and is coming to its 11th and final year, unless Emory agrees to another five-year contract. According to Jordan, there are five to six other companies that are competing to fulfill that partnership with Emory.