Board Chair Tom Mahoney said filling the $194 million funding gap for the Des Moines International Airport’s planned new terminal is a key to the city’s growth. During an interview last week about the Partnership’s 2020 goals, he said the business and development organization will advocate to increase a passenger fee that would cut the airport’s shortfall in half.

“We need to make the investment in a new terminal,” Mahoney said. “We’ll be working to activate that. And we need our local citizens to work with their elected officials at the federal level to see what we can do.”

(Photo: Special to the Register)

The Des Moines Airport Authority Board, which has planned for a new terminal since 2014, believes an increase in the federal passenger facility charge is the most important piece of the funding puzzle. On a one-way flight out of Des Moines, each passenger pays the $4.50 fee.

Airport officials back a plan to boost it by $4. With about 1.4 million people flying out of the airport last year, an increase in the passenger fee would generate $5.6 million in extra annual revenue.

Overall, authority spokeswoman Kayla Kovarna estimated, the added revenue would allow the airport to issue a bond of $80-$100 million.

Congress has not changed the passenger facility charge since 2000. A lobbying group for airline companies has argued against an increase, saying airports can upgrade through other revenue streams.

But Mahoney, the former CEO of ITA Group Holdings, said, “(A rate change) would be the one move that Congress could make to dramatically improve the infrastructure of all airports across the country.” 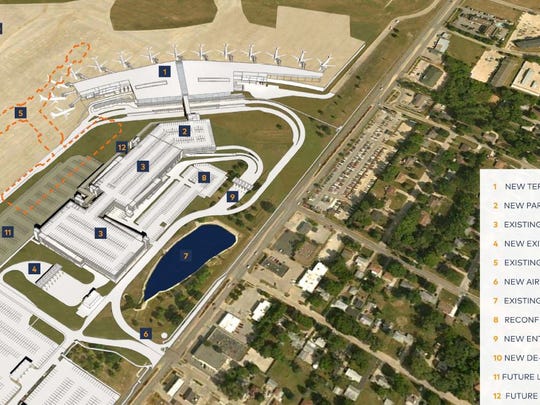 A more modern terminal with more space is proposed for the Des Moines International Airport, which was built in 1948. (Photo: Special to the Register)

The Partnership’s leaders shared their 2020 priorities Wednesday night during a dinner at the Community Choice Credit Union Convention Center. In addition to increased airport funding, the group said it would continue to advocate for downtown and riverfront development, more support for minority-owned businesses and an increase in the proportion of workers with post-secondary degrees.

Though on the Partnership’s list of priorities in 2019, increasing airport funding was not the group’s leading goal that year.

The number of people flying in and out of Des Moines increased from about 2.6 million in 2017 to an estimated 2.9 million in 2019, a hike of about 12%. Airport Executive Director Kevin Foley has said the airport will be working above capacity if it reaches 3 million annual passengers.

In addition to more passengers arriving and going through security, the increase stretches the airport thin in places that most people don’t see, he has said. For example, the airport’s space where security examines checked bags is too small, slowing down the process of getting luggage to landing passengers.

The airport authority approved a $500 million plan for a new terminal in 2016. It says it can currently fund about $300 million of that price tag through cash on hand and bonds.

Just last week, citing passenger growth that exceeded expectations, the authority amended its plans for the airport. It previously expected to open the terminal in 2028 with 14 new gates. Now, the authority says it needs 18 new gates.

On Monday, a development group unveiled a proposal to build a $225 million hotel and casino at the airport, potentially providing the necessary funding for the terminal expansion. The authority took no immediate action on the plan.

In addition to the passenger facility charge boost, the authority is eyeing another revenue stream: the Rebuild Iowa Infrastructure Fund. Set by the state Legislature and split among Iowa’s airports, the annual fund is $2 million. The authority will lobby this session to tick that funding up to $16.5 million a year.

Kathryn Kunert, the Partnership’s 2019 board chair and the vice president of economic connections and integration at MidAmerican Energy, said the organization will support other revenue streams to get the airport to the finish line.

“We’re going to turn over as many stones as we can,” she said. “It needs money.”

During Wednesday’s dinner, the Partnership also celebrated its accomplishments last year. Its board said it assisted with 22 business expansions and 11 new company openings, resulting in an investment of about $1.27 billion in the Des Moines area. 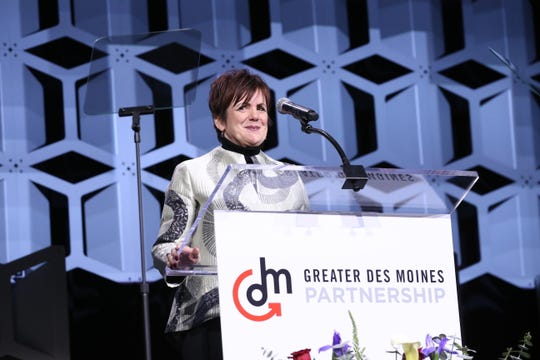 2019 Partnership Board Chair Kathryn Kunert speaks at the Partnership’s Annual Dinner on January 17, 2019 at the Iowa Events Center. (Photo: Special to the Register)

Kunert said fundraising for the Central Iowa Water Trails was the Partnership’s largest success last year. With 86 projects, the plan will turn 150 miles of waterways into a recreational amenity.

The plan, which includes a whitewater course on the Des Moines River downtown, will cost about $117 million. After the U.S. Department of Transportation awarded the project a $25 million grant last fall, fundraisers are about one-fourth of the way toward their goal.

“It’s about economic development, creation of place, water conservation,” said Kunert. “It does so many things. But it’s also that connector piece. It knows no boundaries.”