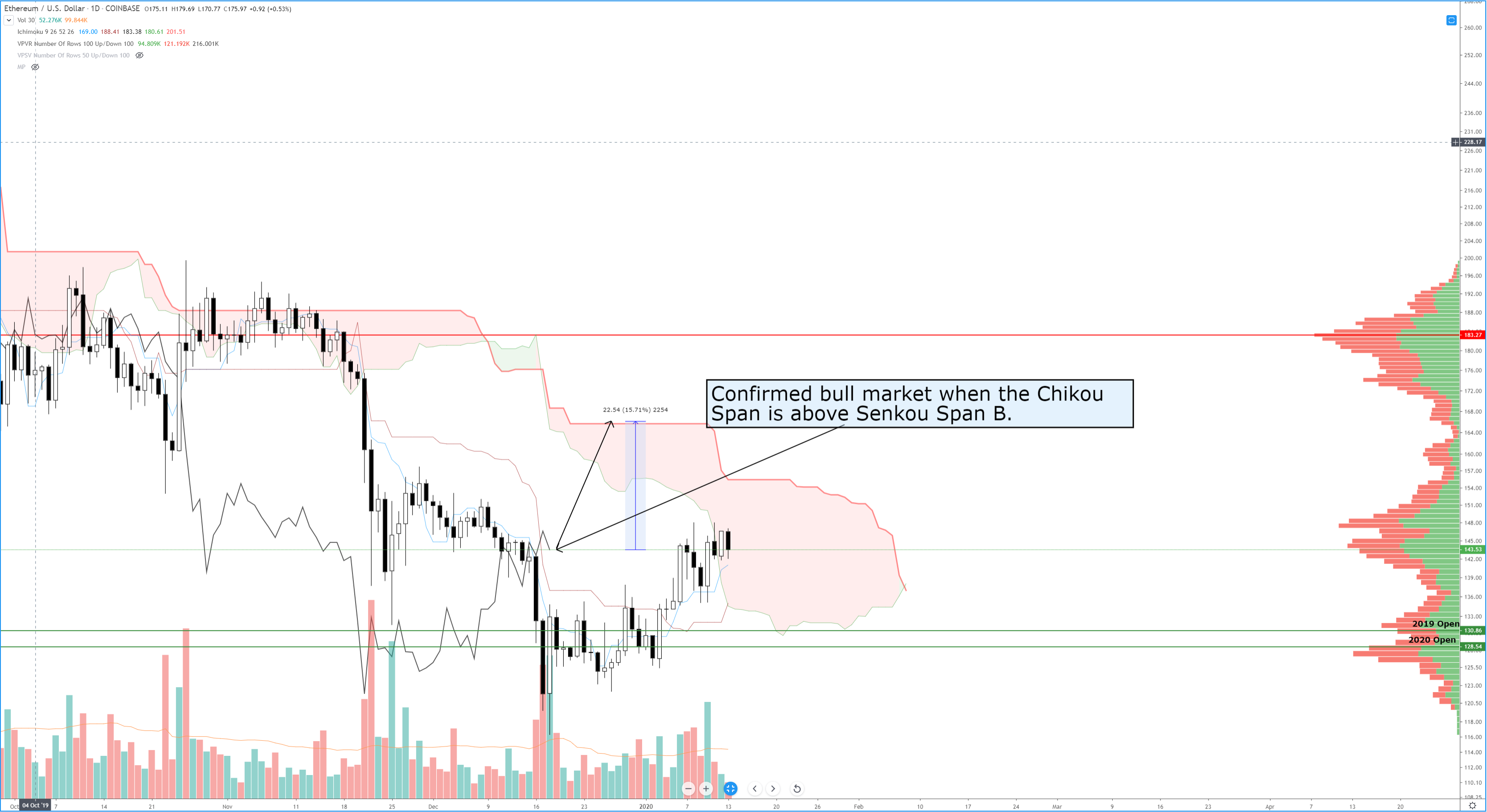 Ethereum’s daily Ichimoku chart certainly hints at a change in direction – but not yet a change in trend. It’s hard to believe that Ethereum was trading up +178% in June 2019 only to close 2019 for a loss ultimately, but relatively flat. Currently, Ethereum is trading higher and above both the 2019 and 2020 open. Ethereum is trading above the Tenkan-Sen and Kijun-Sen but inside a thick Cloud. Perhaps the most bullish condition is the Chikou Span being in open space (it won’t intercept any candlesticks at its present value over the next five to ten periods). We can even see that Future Senkou Span A has just crossed above Future Senkou Span B, indicating a bullish outlook over the next twenty-six days. There remain two more conditions on the daily chart to have an indisputable bullish trend for Ethereum: Both price and the Chikou Span above the Cloud. We may be waiting a while for that to occur though, the lowest level that the Chikou Span will need to cross this week is 166.08. That is nearly +16% above where Ethereum is currently trading (143.50). 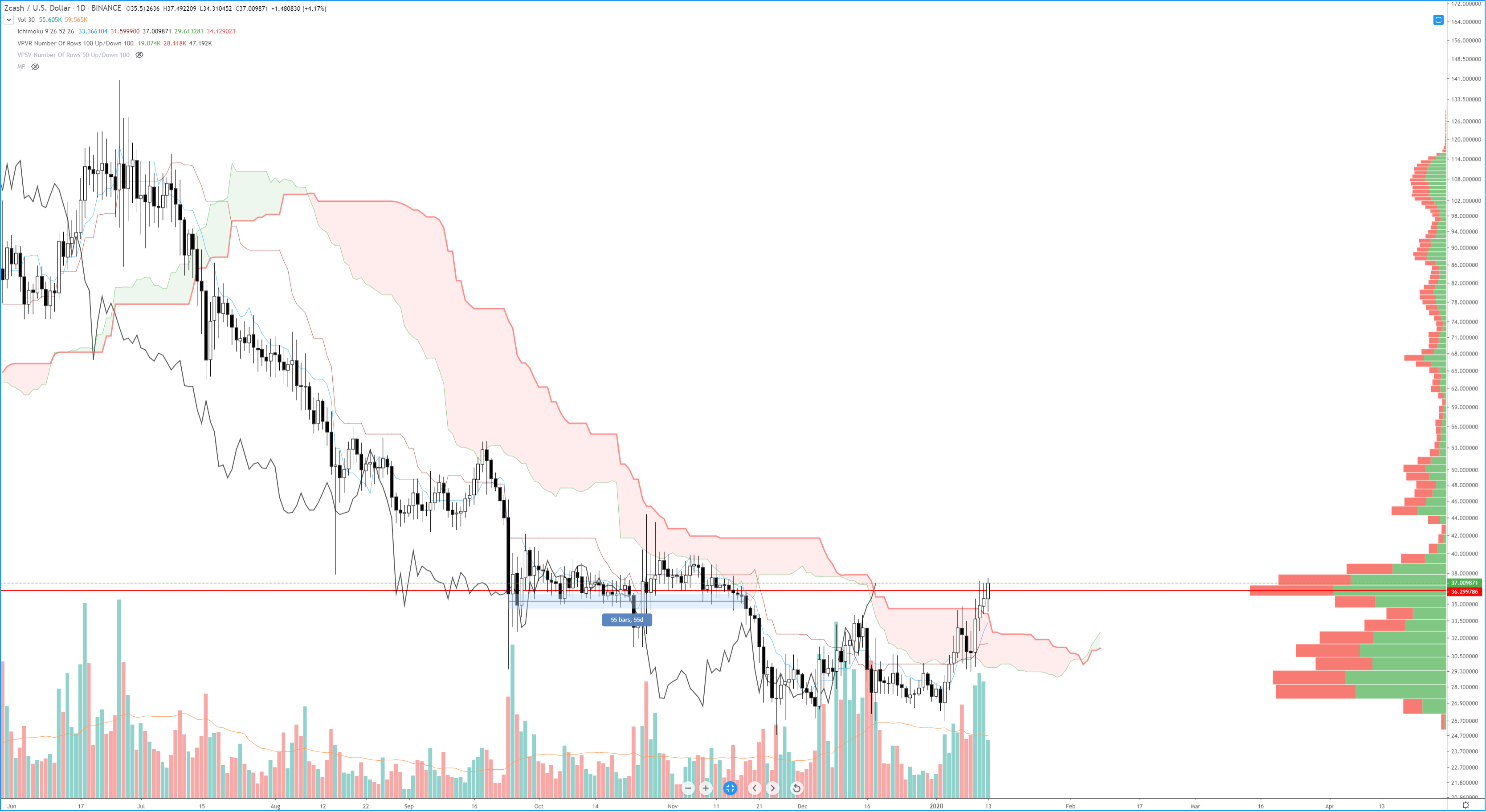 Well, well, well – hello confirmed bullish breakout. Zcash has easily been an overperformer when it comes to its consistency and ability to create new all-time lows. In my entire trading and investing portfolio, Zcash is easily one of the weakest cryptocurrencies around. But that weakness may turn it into a leading out-performer for not just the privacy-coin market, but the entire alt-coin market. Zcash currently has every single condition met for an ideal Ichimoku breakout. The Tenkan-Sen is above the Kijun-Sen, price is above both the Tenkan-Sen and Kijun-Sen, Future Senkou Span A is greater than Future Senkous span B and both price and the Chikou Span are above the Cloud. The last time we had all of these conditions met on the daily chart was back on March 31st, 2019. Zcash has essentially re-entered a nearly 60-day consolidation zone that it traded in from September 24th, 2019 to November 18th, 2019. It is also trading above the VPOC (Volume Point Of Control). Barring any significant pullback across the entire cryptocurrency market, we could see some fireworks soon. 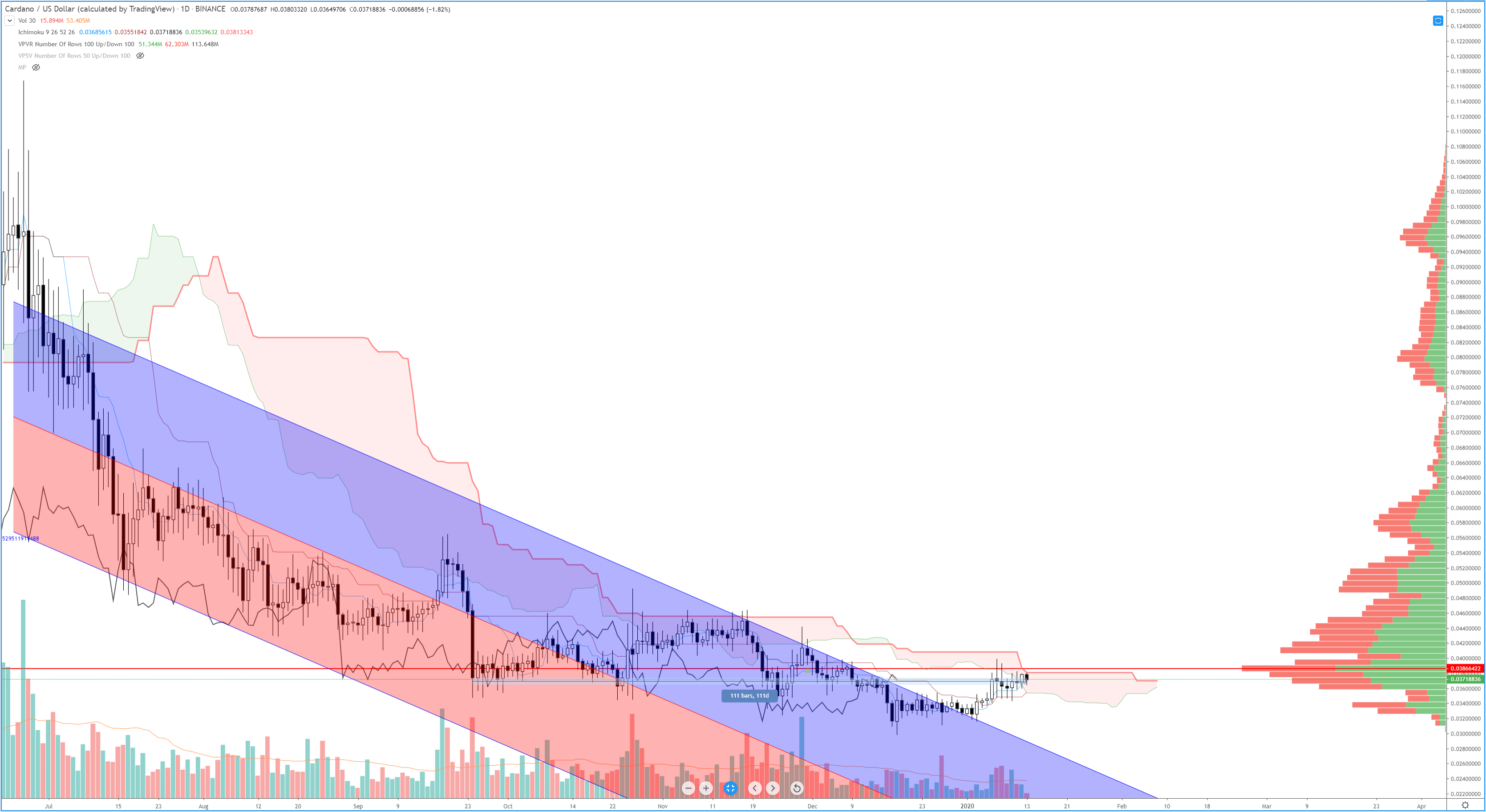 Cardano (ADA) has been in consolidation now for 112-days. This is one of the most prolonged consolidation periods for any top 20 market cap cryptocurrencies (excluding stable coins). The volume profile on the right is for the time period of the June 2019 high to the current date (January 13th, 2020). The VPOC (Volume Point Of Control) is just above where Cardano is currently trading and has created a very tough resistance zone. Both the VPOC at 0.3866 and the top of the Cloud (Senkou Span B) at 0.03811 have formed a double resistance area. Cardano has made several attempts to cross above this zone, but all attempts have failed. There have been five tests of the resistance levels over the past eight trading days, indicating there is a clear desire to see Cardano move higher. Cardano does have some very bullish conditions on its chart though. The linear regression channel has been broken out of and the Chikou Span is in open space. The good thing about Cardano’s consolidation is that consolidation is a precursor to a breakout. And the longer the consolidation zone, the bigger the breakout will be. Given the bullish nature of the current aggregate cryptocurrency market, I see no reason why we shouldn’t anticipate both a breakout higher of this consolidation range, but a return to the 0.05 and 0.06 value areas very soon.

Save money on your currency transfers with TorFX, voted International Money Transfer Provider of the Year 2016, 2017 and 2018. Their goal is to connect clients with ultra competitive exchange rates and a uniquely dedicated service whether they choose to trade online or over the telephone.
Find out more here.

Know Your Audience: Key Strategies to Help Your Business Reach Its Target Customer

Know Your Audience: Key Strategies to Help Your Business Reach Its Target Customer