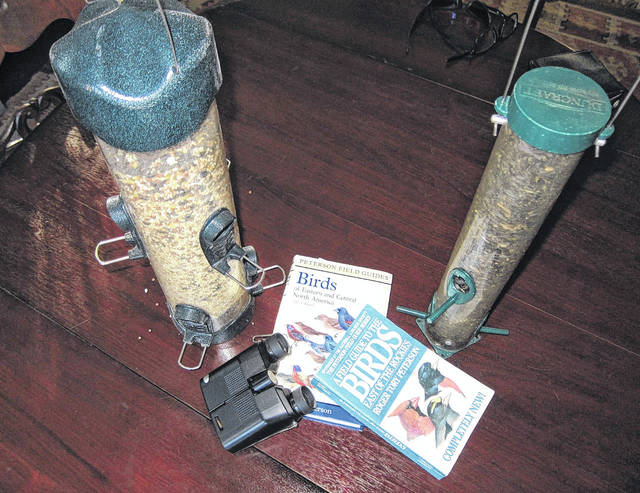 LUMBERTON — This column is for the birds and how I enjoy them.

I am not an expert birder, but my eyes are wide open as I wander about. Watching birds at a backyard feeder and everywhere else can be exciting and instructional with just a few tools.

Roger Tory Peterson’s “Field Guide to Birds of Eastern and Central America” is the birdwatcher’s bible. I have two of them, a 1981 edition and a 2002 edition. When identifying a new bird, I make a note in the margins.

There is another reason to keep both guides on hand. The range maps in the two guides differ for many species, meaning we are getting new birds in Robeson County as things change.

Identifying birds is not as easy as it may seem. Peterson gives many clues: drawings, calls, ranges, flight patterns and behaviors.

One would think that a picture would be enough, but it is not. In the wild, it is not easy to get a good look at identifying marks because of distance and because birds don’t stand still.

Bird calls are impossible for me to remember, despite the availability of online recordings. Two exceptions are the pileated woodpecker and the kingfisher, which have unforgettable calls.

Sometimes behavior is a great help. For instance, a rufous-sided towhee is known to toss leaves around while hunting for food on the ground. A nuthatch will walk upside down on tree trunks.

I have been a backyard bird feeder since college. I quickly learned common backyard birds, although I had to ask a neighbor about the purple-ish sparrows, which turned out to be purple finches.

A group of Baltimore orioles is one of my favorite backyard sightings. I had put some oranges out during a snowfall, and they magically appeared. Alas, it was one and done.

In early November, I had another backyard encounter with a bird I had never seen before. It was a small, black and white bird with a delicate beak.

I guessed it was a warbler, but I had never seen a black and white. A trip to my Peterson, and I had another notation to my field guide.

Another warbler I am familiar with is the swamp-loving prothonotary warbler. Last fall, I saw an entire pine tree full of the small, bright yellow birds.

Years ago, as I was walking along Riverside Drive beside the Lumber River, I met a real bird watcher. He had a cassette tape recording of a prothonotary warbler, and he called one to us. That was my first look.

From that, I learned humility in my bird-watching pursuits. I am still looking for that guy to get my next lesson.

One thing that any aspiring bird watcher in Robeson County should know is that the geographic location of this county, between northern and southern regions and flyways, makes this a good place to see a variety of birds.

A second exciting development is that bird ranges are changing, and some species seem to be moving into our county. Three I’ve noted are the bald eagle, wood stork and swallow-tailed kite.

The territory of bald eagles did not include Robeson County in my 1981 Peterson Guide. After two sightings, I noted in the newer guide that bald eagle’s territory has moved up the Lumber River basin from the coast.

Robeson County is not supposed to be in the range of swallow-tailed kites, my favorite sighting of all time. On a walk along the river, I spied an unusual bird repeatedly swooping down to the water.

A good-sized bird with remarkable acrobatic skills, identifying it presented a challenge. I did not get a great look at its black-and-white markings, but noticed it had a forked tail. I thought the bird was either fishing or eating insects as it dipped to the water.

After considerable research, I had a winner, and the key was its behavior. Peterson states that swallow-tailed kites dip to water to drink.

It helped that I was already familiar with Mississippi kites, another graceful acrobat. Mississippi kites eat insects and nest in large trees, including one on Chestnut Street a few years ago.

This takes the conversation to the birds that patrol our skies, raptors and others. When I first moved to Robeson County in 1974, the sky was empty.

The use of the insecticide DDT had decimated top predators. When the chemical compound was banned in 1968, they gradually returned.

Brown pelicans and ospreys are once again seen fishing at the beaches. Hawks, owls, vultures and falcons are also back. One of my best backyard sightings was a peregrine falcon engaged in a breathtaking airborne attack on a dove, right in my backyard.

One of my favorite birds in this category is the nighthawk. I first noticed them in my neighborhood about 20 years ago.

Nighthawks flutter erratically about the sky, making a distinct racket that sounds like a kill dear. As they dive on a large insect, they generate so much speed that the wind booms off their wings.

Ospreys are another marvelous raptor. I first admired them at the beach, which is their favorite fishing habitat.

A recent sighting in Robeson County was totally unexpected and thrilling. This osprey was too far away for me to note markings other than it was a light colored, soaring bird.

Raptors are not the only birds that patrol Robeson County’s skies. I saw my first wood stork soaring above while driving along U.S. 301 between St. Pauls and Lumberton.

Its long legs were a dead giveaway that this was no raptor. Robeson County is not on the wood stork’s range map, but we are close.

Like the swallow-tail kites, I believe wood storks are an advance guard of a species seeking new territory in favorable climate, which Robeson County’s swamps, river and ponds provide aplenty.

I welcome these newcomers. It is a truly inspiring experience to spot one.

If you have favorite birds, interesting sightings, or corrections, please email me or send me a text message. There could be a second edition to this story because there is so much more to learn. 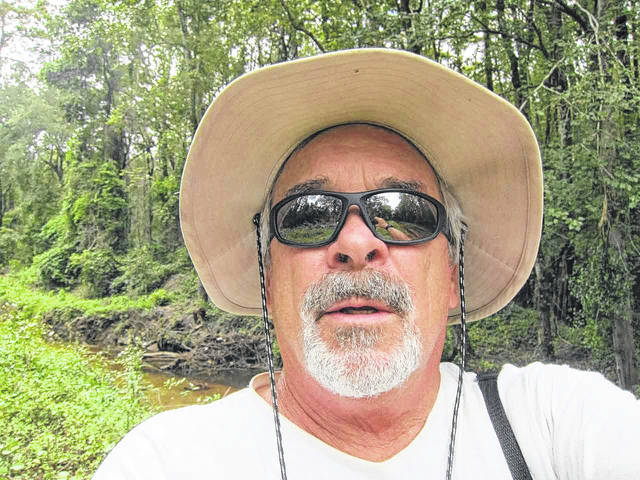