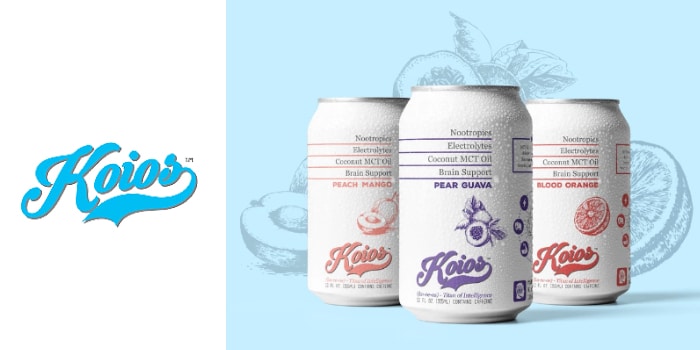 Like many consumers, Chris Miller has struggled with the overstimulation caused by modern technology. As the founder and CEO of Koios Beverage Corp., Miller is aiming to build on the emerging space for brain health functional beverages with a line of nootropic infused beverages intended to help consumers focus.

Speaking with BevNET last week, Miller said that Koios is aiming to build on the rise of brands such as Bulletproof and LifeAid’s FocusAid line in an effort to market nootropics to a mainstream audience. The brand is currently available in over 5,000 retail outlets nationwide — including Walmart and GNC stores — and expects to double or triple its brick-and-mortar footprint next year.

Founded in 2012 as an organic supplement company and based in Denver, Colorado, Koios produces functional beverages made with MCT oil, L-theanine, L-tyrosine, lion’s mane mushroom, electrolytes, natural caffeine, and nootropics such as Alpha-GPC and Ciwujia. The brand’s core line includes Apricot Vanilla, Berry Genius, Blood Orange, Peach Mango and Pear Guava flavors and retails for $2.85 per 12 oz. can.

“We used to be a very industrial society but now we’re a very analytical society and our brain hasn’t evolved yet to keep up with it,” Miller told BevNET. “We’re inundated with information and everything we do is analytical. Technology has isolated people to the point where we all feel pretty alone and depressed.”

Miller, who worked in finance at firms such as Promark Financial and Accelerated Wealth prior to founding the brand, first developed Koios when he was searching for a natural alternative to Adderall. Diagnosed with ADHD, Miller said the prescription stimulant was overpowering and “ruining [his] life.” Through online research, he discovered the online biohacking community that has promoted nootropics and functional ingredients such as MCT oil as a means of improving cognitive function.

According to Miller, Koios found early success with its supplement line, but the brand’s initial foray into beverage proved troublesome. Aiming to give the brand access to a broader consumer base through the beverage category, the company launched an RTD product in 2015. However, Miller admits the first iteration of the drink was not up to quality, marred by poor taste and packaging that was too similar to unhealthy energy drinks. During this period Koios nearly went bankrupt — twice – while grocery retailers struggled to understand the nootropic concept.

“We went in with a product that really wasn’t ready to compete directly at the store level,” Miller said. “We thought if you had 1,000 stores then you’re home free and we learned the hard way that’s not real.”

In 2017, the brand was acquired by Super Nova Petroleum Corp. in a reverse takeover, with Super Nova changing its name to Koios Beverage Corp. in April 2018. During this period the company also reformulated the product to emphasize taste and rolled out new packaging in 12 oz. cans.

According to Miller, taking the company public gave Koios more access to capital markets while avoiding private investment. Miller said his team controls the board of directors and is the majority shareholder in the company.

“At the time, if we brought in something like a CAVU or another private investor we probably would have lost the whole company,” Miller said. “I don’t know if we would have raised as much money as we did. But [going public] gave us every bit of opportunity we needed to go stand and let us hit the ground running. I don’t know if we’d be where we’re at if I hadn’t done it.”

Today Koios is focused on expansion. The company owns its own production facility and earlier this year partnered with DSD house New Age Beverages to service the brand in the Rocky Mountain region and Miller said he has been in discussions with several other DSD distributors across the country.

Koios also sells its products online direct-to-consumer. Miller said the company has targeted the online biohacker community to generate repeat customers. He said the brand sold over $100,000 of product through its website on Black Friday this year.

In July, the company launched a new fitness beverage line called Fit Soda. Although Koios is in some gym accounts, including 24 Hour Fitness, Miller said the company will focus on growing its core brand in the grocery channel while promoting Fit Soda in gyms. The non-caffeinated,zero sugar line includes branched-chain amino acids (BCAAs) and broad-spectrum CBD and comes in Black Cherry Cola, Orange Creamsicle, Root Beer Vanilla Float and Sparkling Citrus varieties. It retails for $1.80 per 12 oz. can.

While Fit Soda is currently marketed to small chains and independent accounts, Miller noted that the brand is also prepared to launch Koios products infused with CBD but will wait for major retailers and distributors to accept the ingredient before launch.

“Our Walmart buyers told us flat out they’re not even considering [CBD], so for us to take attention away from those bigger channels to sell into bodegas and smaller distributors didn’t make sense for us,” he said. “We have those products ready and our focus has been to dig out bigger retail space so when those retailers are ready we’ll have a CBD product for them.”

Self-Driving Truck Transports 40,000 Pounds Of Butter 2,800 Miles Across The Country

Self-Driving Truck Transports 40,000 Pounds Of Butter 2,800 Miles Across The Country