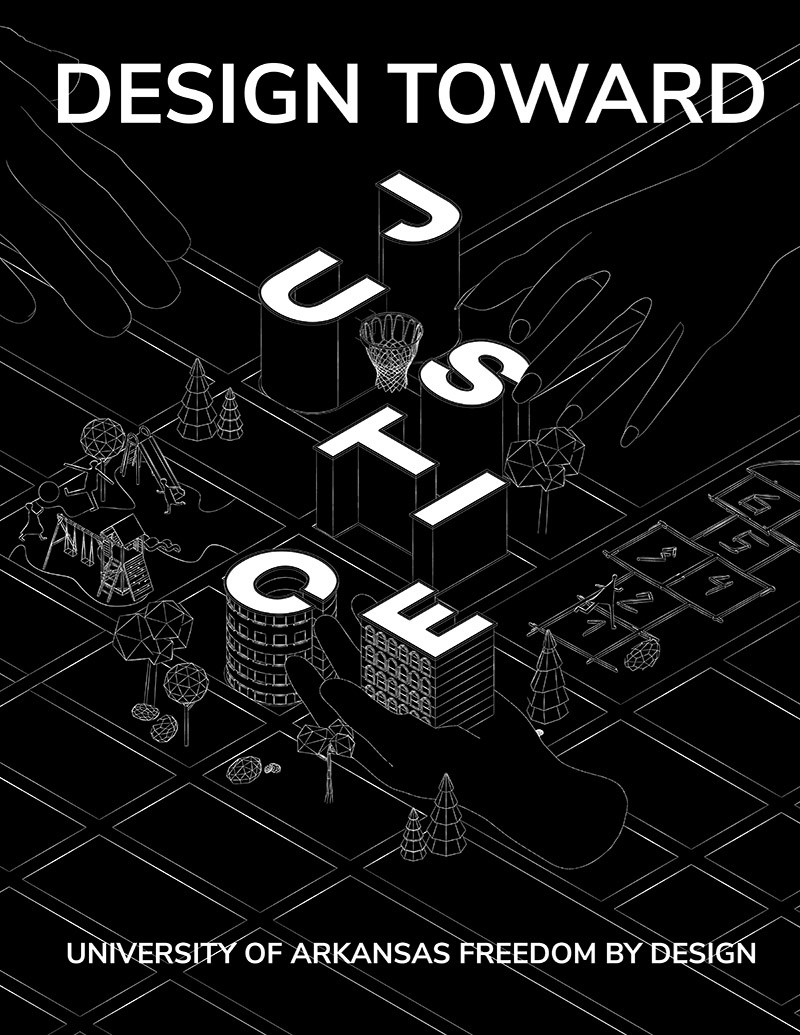 The “Design Toward Justice” activity book explores design education and diversity in fun and engaging ways.

John Folan has an intense passion for and vast experience in public interest design. This type of design is typically done in the interest of those who can benefit from design services, but who traditionally don’t have access to those services.

Now, Folan is sharing that same passion and vision with design students in the Fay Jones School of Architecture and Design.

Folan is head of the Department of Architecture in the Fay Jones School of Architecture and Design. Before coming to the University of Arkansas in 2019, he founded a Freedom by Design chapter with students at Carnegie Mellon University in Pittsburgh, Pennsylvania.

The chapter at Carnegie Mellon created a Weatherization Kit that helps reduce energy costs for homes in disinvested communities of Pittsburgh, where more than 60 percent of families must decide between paying their rent or utilities in the winter months. That project won the inaugural 2020 SEED Award for Justice, Equity, Diversity and Inclusion in design, architecture and land development, presented by the National Organization of Minority Architects (NOMA), the National Association for the Advancement of Colored People (NAACP) and the Social Economic Environmental Design (SEED) Network.

Folan says that recognition of this project is more meaningful to him than any other he’s been a part of because it demonstrates the enormous impact design can have in addressing challenges of consequence that are often considered insurmountable or too modest for attention. And he wants to continue meaningful work with the Freedom by Design student chapter recently formed in the Fay Jones School.

Freedom by Design was a grassroots effort started at the national level in the 1970s by the American Institute of Architects Students (AIAS). Since then, an increasing number of AIAS chapters across the country have added a Freedom by Design component to their work.

In the early days, chapters focused on providing accessibility features for people in their homes — such as building and installing a ramp for those with disabilities, Folan said.

“That is a manageable scale of project for students and faculty mentors to work on as an extracurricular pursuit. But there are countless challenges that the public faces, where design can provide solutions. They are similarly manageable, and can address challenges where need may not be met otherwise,” he said.

Members of the Fay Jones School’s AIAS chapter approached Folan in fall 2019 about starting a Freedom by Design chapter. In the group’s early phase, Folan encouraged the students to spend some time getting established — developing a mission statement with a formally articulated set of core values specific to Arkansas. With that infrastructure in place, the architecture students were ready to begin working on their first project in summer 2020.

“After investigating a number of project types and areas of focus, there was an intense desire to take on a project that addressed racial justice, diversity, equity and inclusion. Specifically, there was a desire to create something that might help raise awareness about opportunities design presents for children in underrepresented communities,” he said.

The Fay Jones School students have created an activity book for youth that explores design education and diversity in fun and engaging ways. Targeted at middle school students ages 11 to 14, this primer on design explains how and why designers are important, celebrates underrepresented designers of significance through history, and covers the role of social justice in design.

The 68-page “Design Toward Justice” workbook features coloring activities, puzzles, games, cutouts and comic strips as mechanisms for making the content accessible to middle schoolers. Beyond exposing the students to design and designers, activities also focus on skill development in drawing and making. For example, the workbook teaches how to draw accurately by reproducing a photographic image of a person or a building by breaking it down into gridded components and representing each segment at a time — an exercise that first-year architecture and design students learn in the Fay Jones School. There are also buildable cutouts, where students use the pieces to make 3D models. There are connect-the-dots drawings of advocacy tools, such as a ballot box, megaphone, books and protest signs.

The book highlights diversity in creative professions — with people students may or may not have heard of. These include Zaha Hadid, an Iraqi woman who was the first woman to receive both the Pritzker Architecture Prize, the most prestigious award in architecture, and the Royal Gold Medal from the Royal Institute of British Architects. She designed the Heydar Aliyev Center in Baku, Azerbaijan, and the Guangzhou Opera House in Guangzhou, China.

Another featured architect is Julian Abele, a Black architect who helped design more than 400 buildings, including the Philadelphia Museum of Art, and was head designer of Duke University’s west campus.

Another is Norma Merrick Sklarek, the first Black American woman to be a registered architect in both New York and California and the first Black female Fellow of the American Institute of Architects. She designed the U.S. Embassy in Tokyo and the San Bernadino (California) City Hall.

“This workbook is intended to expose youth to fundamental aspects of design and then also introduce them to a diverse array of practitioners — different types of designers, architects, artists — representing all cultures and not the paradigm that I know I was raised with and others were raised with,” Folan said.

Folan said that the students have not only focused on race and gender in the book, but also cover disabilities in various forms.

“In my mind what our group has done so well is they have embraced the totality of diversity, and done it in a way that is accessible to younger students,” Folan said. “Their work doesn’t pontificate; it doesn’t proselytize. It just presents things with the dignity deserved, and in a way that you understand and accept, and that demonstrates what should become the norm.”

This design education workbook has similar objectives as the school’s summer design camp, Folan said, and many of the students involved in creating the workbook have served as teaching assistants during the camp.

The student workbook also has companion curriculum for teachers. The design students are working with the Thaden School in Bentonville, and a focus group there has been testing the workbook in their classrooms in recent months. After that testing with the target audience, the design students will assess the feedback, continue to refine the piece, and reengage with additional networks to promote broader use.

“I’m thoroughly impressed with what the students produced and am very, very proud of them. What they’ve done represents maturity beyond their years and has been received well by a public audience. That, to me, points to their success.”

The projects that the school’s Freedom by Design chapter takes on will evolve over time, as new groups of students come aboard, Folan said, but they will share a common thread going forward. Their work is not about building design. It’s about building the design and diversity vocabulary and understanding for all ages — about community outreach and education and impact.

That’s just like the project that continues on in Pittsburg after Folan’s departure. He spent six years developing that award-winning project, which is modest yet significant in its positive impact in the community. He started the project as the founding faculty director and mentor for the Freedom by Design Chapter at Carnegie Mellon, and he continues to stay involved with it through his role as executive director of PROJECT RE_.

The Weatherization Kit is a box that contains window plastic, weather stripping, door sweeps and other items that help reduce heat loss in homes, along with tools for installation. An illustrated instruction booklet created by the students provides directions for installation, explains expected energy savings, and outlines suggestions for other inexpensive home insulation measures. The student chapter in Pittsburgh takes care of distributing the kits each fall, provides training events at PROJECT RE_, and helps with installation for disabled and elderly residents.

When installed properly, the kits have been life-changing for many residents, Folan said, by saving on heating costs and empowering residents with tools and knowledge to tangibly improve their daily lives. The packaging of the kit is designed to present these tools in a way that reinforces human dignity. Rather than jamming a bunch of materials into a plastic bag without instructions, the materials are presented thoughtfully in an elegant box that becomes an integral part of the weatherization process once the contents are utilized. The SEED Awards jury recognized both the project’s empowerment of residents to take the betterment of their homes into their own hands and the holistic consideration of the residents through representation, training and follow-up.

“The students who worked on that project really had to approach it with humility,” Folan said. “It is a modest project. Weatherization is not seductive by nature — designers don’t get excited about weatherization. But it is necessary in challenged communities where people make decisions about whether or not to heat their homes. This project makes a real difference, and, like anything, if it isn’t thought about and designed, there are real consequences.”

Dealerships look to hire from outside the industry ... slowly

Dealerships look to hire from outside the industry ... slowly