Already one trading month of 2021 has been burned, therein the price of having mostly been churned. In settling out the week on Friday at 1850, ’twas not only the sixth consecutive trading day during which such price traded, but so it has done in 13 of the past 15 trading days.

Thus should you be casually queried off-the-cuff as to the present price of Gold, your simply responding “1850” without nary a thought ought be fairly spot on, impressively making you appear as one “in the know.”

But year-to-date, the precious metals story (albeit somewhat stealthily) is . For have you been watching the Gold/Silver ratio of late? We have as it has its own dedicated cell on our key screen of live data. Which is why for the first time “in forever” we of a sudden sat bolt upright this past Thursday in taking notice of said ratio being sub-70x!

The millennium-to-date average of the Gold/Silver ratio is 66.2x such that ’tis fair to say these two precious metals are well within a standard deviation of having returned to being on “par” with one another. (For those of your caring to include a full generation prior, said average ratio as dated from 1975 is 59.7x). Either way, here’s the daily graphic across these past twenty years (plus one month) of the Gold/Silver ratio with its average as having evolved throughout: 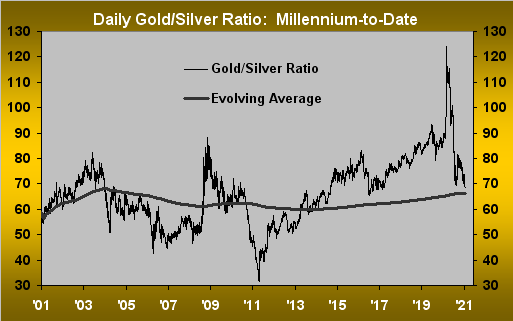 Hence the race back to a more realistic reading. And clearly ’tis not because of any fallout in Gold. Rather, ’tis due to Silver finally garnering long-overdue committed notice by getting much more of a bid than has Gold in recent months. Even for just this brief year so far, Gold is -2.7%—in last place by the BEGOS Market Standings—but Silver is in second place is +2.0%. Here’s the table with 2021’s first trading month officially in the books:

‘Course +7.7% is the big winner thus far in 2021, clearly being cushioned by the nixing of new StateSide energy facilities, (the void of which hardly shall be filled by substantive “green” sources perhaps for decades). But again as to Sweet Sister Silver’s outlook for the balance of this year: should the Gold/Silver ratio of, let’s say 70x, be maintained and Gold touch our forecast high of 2401, that mathematically would see Silver at 34.30 … “Got Silver?”

As for the present we’ve got Gold by its weekly bars from a year ago-to-date, price’s churning nonetheless keeping the relatively fresh parabolic Long trend intact, its fourth blue dot appearing as shown. But priced at 1850 with the “flip to Short” price at 1779, such distance of 71 points is basically the same of that portrayed a week ago, which given the present “expected weekly trading range” of 70 points still finds this Long trend technically subject to being short-lived. In fact, despite the turbulence in the S&P 500, Gold’s “expected daily trading range” (per its website graphic) is actually narrowing a bit (31 points at present). Yet, notwithstanding Gold’s churn, both the weekly parabolic and linear regression trends remain to the upside: 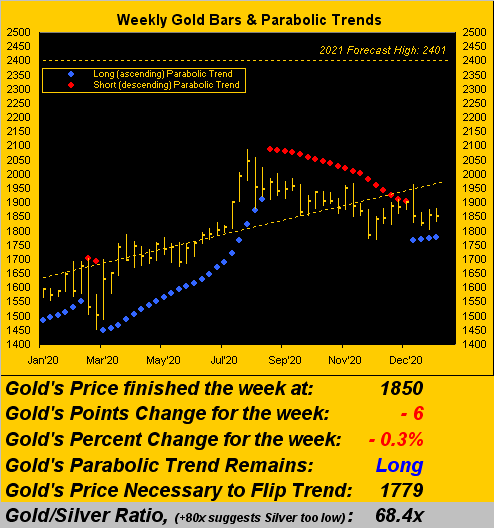 The mild downside bias across the entire group from last summer onwards belies the benefit from the inevitable monetary printing waiting the wings. Again, we’ve mused about it being already priced in … but mathematically it really has not, simply by the opening Gold Scoreboard’s valuation today of 3721. “Got Gold?” 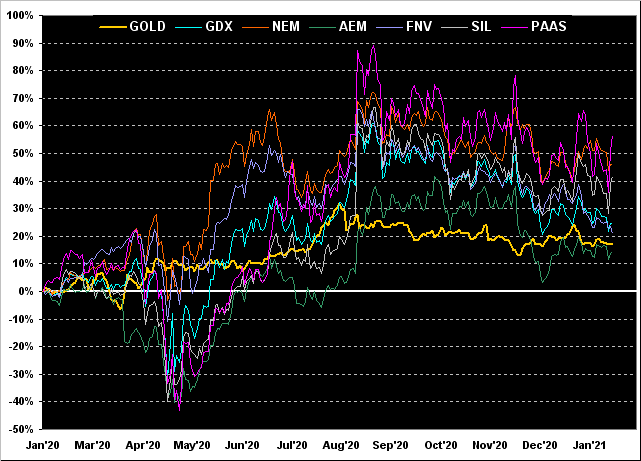 And here is additional impetus for higher prices of Gold and Silver, the cutting-edge Dow Newswires having figured out that the “U.S. Economy Shrank in 2020 Despite Fourth-Quarter Growth” Who knew?

Further, ’tis said China has surpassed the U.S. in attracting direct overseas investment, albeit the latter is looking for stimulus savings to ramp up StateSide economic growth, especially as the new Administration is credited with vaccines now becoming widespread. What one difference a week makes, eh? Why even the International Monetary Fund is saying economic growth is to improve, (the other side of its mouth maintaining the outlook as “uncertain” giving lags in both Europe and emerging markets).

More specifically, in looking at our Economic Barometer, is that more “Biden Bounce” which we see? Without new policies as yet affecting the Baro, still the past week brought us better readings for January’s and the , as well as for December’s and sales, and (the latter being less negative), and more inflative . (Or is it stagflative?) Here’s the Baro:

As for the stock market when measured by (red line above), it put in a down January. But the notion of “As Goes January So Goes The Year” is best relegated to the “Myth Dept.” Through the first 20 years of this Century, 10 of the years for the S&P 500 went as did January … and 10 of the years went as opposite January. Besides: given our “live” price/earnings ratio for the S&P now 77.6x, can the Index really go any higher? (See our closing comments at the foot of this missive).

First, for the BEGOS bunch as a whole, let’s go ’round the horn for their last 21 trading days (from 30 December)-to-date along with their respective grey diagonal trendlines and their “Baby Blues” of each trend’s consistency. At present, only the trends for Oil and the S&P (“SPOO”) are rising, however consistently less so given their blue dots are falling: 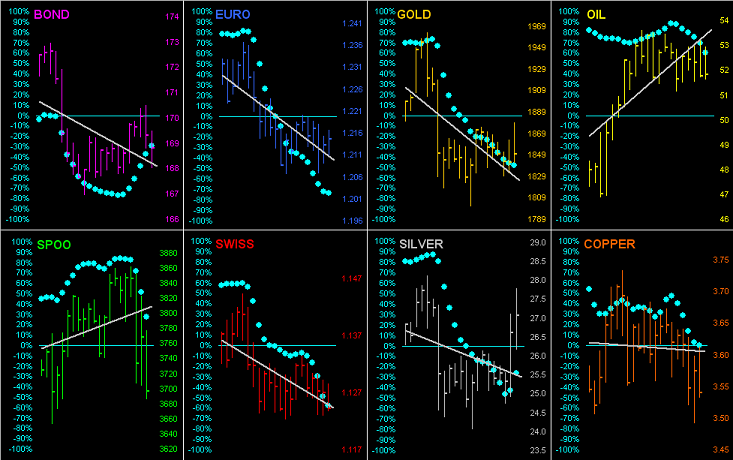 Next, the 10-day Market Profiles for Gold on the left and for Silver on the right reveal the bulk of trading for the yellow metal between 1859 and 1845, and for the white metal ’round the 25.30 area, albeit present price has proceeded up to into the 27s: 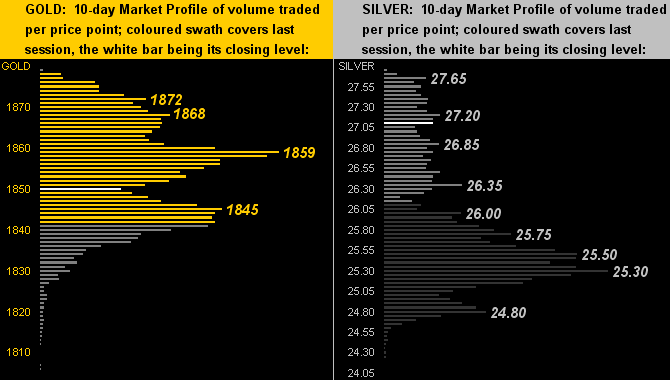 And now to our chart of Gold’s Structure by the month from the highs of 2011-to-date. Since Gold’s most recent All-Time High of 2089 this past 07 August, Gold has returned to being a-churn all about the The Northern Front, The Final Frontier, and The Gateway to 2000. Our forecast high for this year is as noted at 2401: 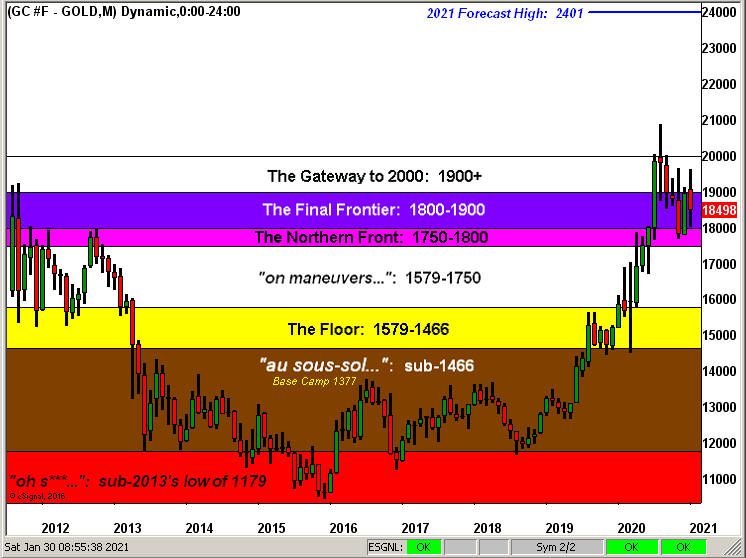 With this week’s wrap, here is our thinking on the S&P 500. Not yet fully with conviction, we are considering that the Index’s high for this year (3871 just this past Tuesday, 26 January) may be “all she wrote” as the balance of the months unfold. To wit:

■ Per Reuters this past week we read that “Not Company Earnings, but Vaccines Now Steering Investor Sentiment”. Well thank you for that, but Earnings have hardly been any kind of steering mechanism for the S&P for the last several years. This drives us bats, the piece going on to read that “Of the 159 companies in the S&P 500 that reported earnings through Thursday morning, 83% posted results that topped analyst expectations…”, blatantly omitting what is of paramount import: that (now through Friday with 164 companies having reported) only 59% have actually bettered their bottom lines over Q4 of a year ago. Isn’t that about which it is all supposed to be? In what kind of a valuation (or lack thereof) era are we living? You already know our take, but to reiterate: the S&P by earnings ought be half or worse of where ’tis, whilst Gold by debasement ought be double or better of where ’tis. And yes, we still expect their levels to pass one another.

■ Emails and texts have found their way here querying about GameStop (NYSE:) stock, for which (honoured as we are to be asked) we humbly reply with our stock answer that “We don’t do stocks.” Common stock trading is beyond our risk profile, understanding and pay grade. Rather we value our sleep in siding with the serenity and security of the futures Markets which comprise BEGOS. And yes, that’s plenty enough with which to deal.

■ Therefore: lack of substantive earnings and this hardly newfound kind of “pet rock” stock market speculation is typical of what precedes major crashes. To be sure, our sense remains that the S&P 500 “is horribly due for a massive crash“. And yes, it may be starting right now.

So gather in some Gold whilst ’tis in churn. Silver’s doing her part to return. And rest in comfort whilst the balance doth burn!

Clean label pectin market to bounce back after pandemic

Clean label pectin market to bounce back after pandemic