Gold More Consolidative Than Corrective Before Next BOING Higher

If you are a Bull, which without saying you are (else you’d lack the common sense to be reading this piece, let alone own Gold directly or by right), then this is your kind of market “correction” wherein price rather than falling is merely consolidating. That’s pretty cool, eh?

Down the road some might nevertheless goad: “Yeah, we rode through Gold’s correction without price droppin’ a wit, but that exposure you have to the crashin’ must be killin’ ya, huh?” Yet the humble Gold Bull knows to keep his head down whilst all around are losing ground. Further, the stock market has not only yet to embark upon our long-expected “Look Ma, No Earnings” crash, but instead has been teasing all-time highs.

In fact, for the just-ended Q3 Earnings Season wherein 447 of the ‘s constituents reported, given COVID Carnage only 226 (51%) improved their bottom lines over Q3 of a year ago … and yet the S&P today at 3558 vs. 3108 on this date a year ago is +14.5% higher. Our honest calculation of the Index’s “live” price/earnings ratio is 43.7x, nearly triple what we were taught was “expensive” in B-school; (‘course in those days there were investment components known as “interest rates” and “savings accounts” and even something called “CDs” that emitted money rather than music). In the perfect vacuum, should interest rates ever get off the mat such as to drive folks from equity to debt, in turn putting that P/E ratio back down to 15x, the S&P by proportion from today would fall to 1221, (a “correction” of -65.7%). Just sayin’… “Got Gold?”

And indeed Gold continues its recent stint of appearing far move consolidative than corrective per the following rightmost pattern of the weekly bars. The red dots of parabolic Short trend now number 13 weeks in length. But in price settling yesterday (Friday) at 1870, ’tis higher than the Friday settle of eight weeks ago (1864). That noted, we’re still sensitive to Gold 1830 as structural support, which if failed would welcome the 1790s: 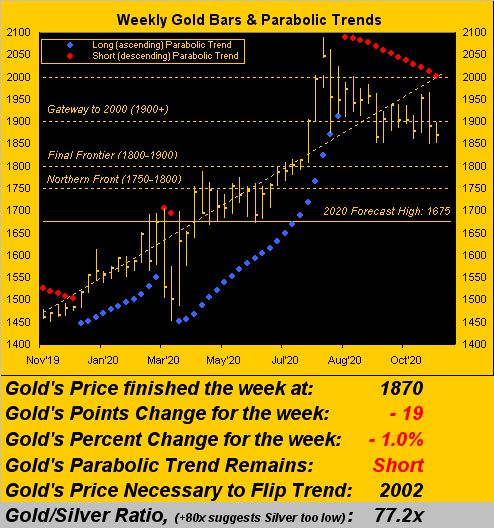 Fact is, had you bought that shiny gold coin during any of the weeks ending 30 October, 02 October, 25 September, or moreover even four months back during the week ending 24 July, today ’tis priced right where then ’twas. And yet after Gold reached its All-Time High of 2089 (07 August), price is since said to be in a correction. From our purview, ’tis rather in a consolidation. After which you already know what has then happened these recent years: “BOING!” And by the opening Scoreboard wherein we today value Gold at 3633, price has nonetheless sufficiently lagged currency debasement such that one heckova “BOING!” awaits us. ‘Tis as usual merely about “The When”. To be sure, expecting 3633 in but a single “BOING!” is a bit of a stretch. But continuing the now nearly two-year trend as our friend of “Consolidation… BOING!” would make rightly overdue record levels just a matter of time per this next graphic of Gold by the week from January 2019-to-date: “THAT is very impressive, mmb…”

Upon it playing out, Squire, indubitably so, and of course fueled by the further fomenting of faux dough. In fact, did you know that in preparing this week’s Gold Scoreboard, we noted the StateSide money supply as measured by “M2” just crossed above the $19 trillion level? Its year-to-date increase alone is +24.9%. That for Gold to the current 1870 price is +23.0%. Which defines how it ought be: Gold and currency debasement in unified harmony. ‘Tis a beautiful thing, (a Kleenex, please…)

Beautiful too, indeed to borrow Squire’s word “impressive”, has been the busting out of the once Covid-creamed Economic Barometer, certainly aided in part that (per Dow Jones Newswires) “New Entrepreneurs Emerge From Wreck of Covid Economy.” To again quote Tim McIntire: “Come on, it’s America, babe.” –[The Gumball Rally, ’76]. However the Econ Baro put in a neutral week, October’s 14-year record for Existing Home Sales being offset by very notable slowing in the pace of Retail Sales. But still…

Additionally ’twas just a week ago that St. Louis FedHead James “Bullish” Bullard (who clearly must be a fan of the Baro) said ’tis been a much quicker than expected economic recovery from COVID. Notwithstanding, FedViceChair Richard “Committed” Clarida says his bank shall make available all of its tools toward bolstering the economy. And FedChair Jerome “Persistent” Powell continues to push for urgent extensions of credit. (Also of note, COVID Senate absentees impeded Judy “Gold Standard” Shelton from receiving FedBoard confirmation, her clock perhaps ticking down toward the 05 January Georgia runoff results).

Meanwhile, have you been watching the price of Copper? As it goes, so ’tis said goes the economy, especially as induced by China, wherein October’s consumer spending and investment accelerated from pre-COVID levels a year ago. Indeed from ‘s March low of $1.9725/lb, price this past week reached $3.3015/lb: that’s an increase of +64.7% to almost a three-year high. Moreover this millennium, the red metal has been positively-correlated, even a leading indicator, for the yellow metal. From the website, here’s a quick two-panel glimpse of Cousin Copper, the three months of daily bars at left and 10-day Market Profile at right: 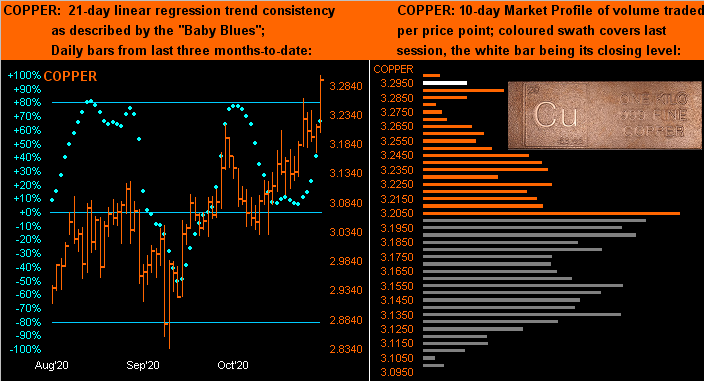 As for the precious metals from three months ago-to-date, here they are for Gold on the left and for on the right, in both cases their respective “Baby Blues” of linear regression trend consistency still lacking such, and certainly so compared with Copper’s far more robust, (to be leading?) display: 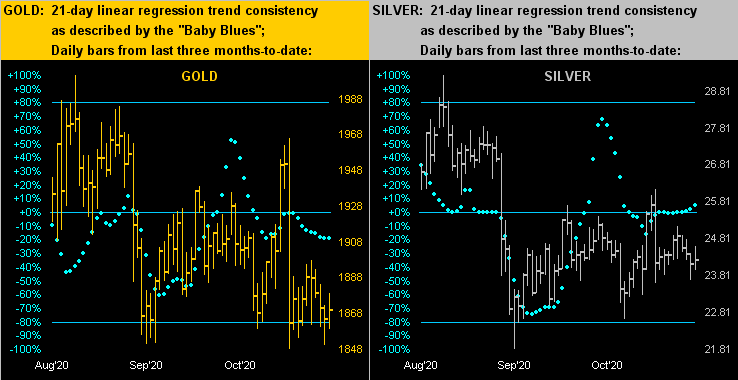 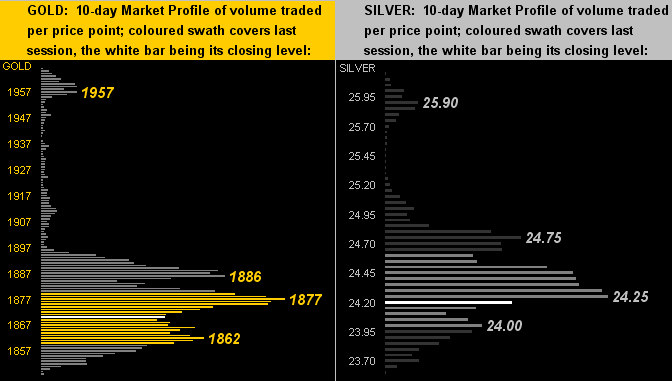 Toward an abbreviated StateSide trading week, we’ll leave you with these two bits of cheek:

■ Saudi Arabia’s Public Investment Fund just reduced (smartly in our view) its holdings for U.S. equities by some 30%; yet ’tis maintaining Uber (NYSE:), a $48/share company that earns nothing… Curious that…

■ And then there’s Tesla (NASDAQ:) which come year-end shall be part of the great S&P 500, perhaps even in two tranches. This $490/share company earns a measly 52¢/share, the P/E thus 942x; yet the flagging New York Times prints that Tesla joining the S&P “could have investors scrambling to buy its shares.” Who thinks like this? “Curiouser and curiouser!” cried Alice.

Don’t you get caught cryin’; instead, get some Gold!

Pfizer, BioNTech seek emergency use of COVID-19 shots in US - krcgtv.com

Pfizer, BioNTech seek emergency use of COVID-19 shots in US - krcgtv.com