Neither first nor second biologic beneficial for many with JIA

Many patients with juvenile idiopathic arthritis see little benefit from treatment with their first or second biologic, according to data published in The Lancet Rheumatology.

The researchers also found no evidence that switching to a second non-TNF-inhibitor biologic was any more effective than a second TNF inhibitor.

“This study was the first observational study to report on the extent of multi-biologic switching in children and young people with JIA in the United Kingdom, and the first to compare the effectiveness of different biologics after the failure of a first biologic in this cohort,” Lianne Kearsley-Fleet, PhD, of the University of Manchester, told Healio Rheumatology. “It highlights that a significant proportion of children and young people with JIA struggle to find the most effective and tolerated therapy for their JIA.”

“Currently there are differing opinions on which biologic drugs, and in which order children should receive them, should methotrexate and their first biologic — often a TNF inhibitor — not be effective or tolerated,” they added. “In part, these differing opinions exist because of the lack of specific evidence to inform them and in this case, the lack of specific clinical trials.” 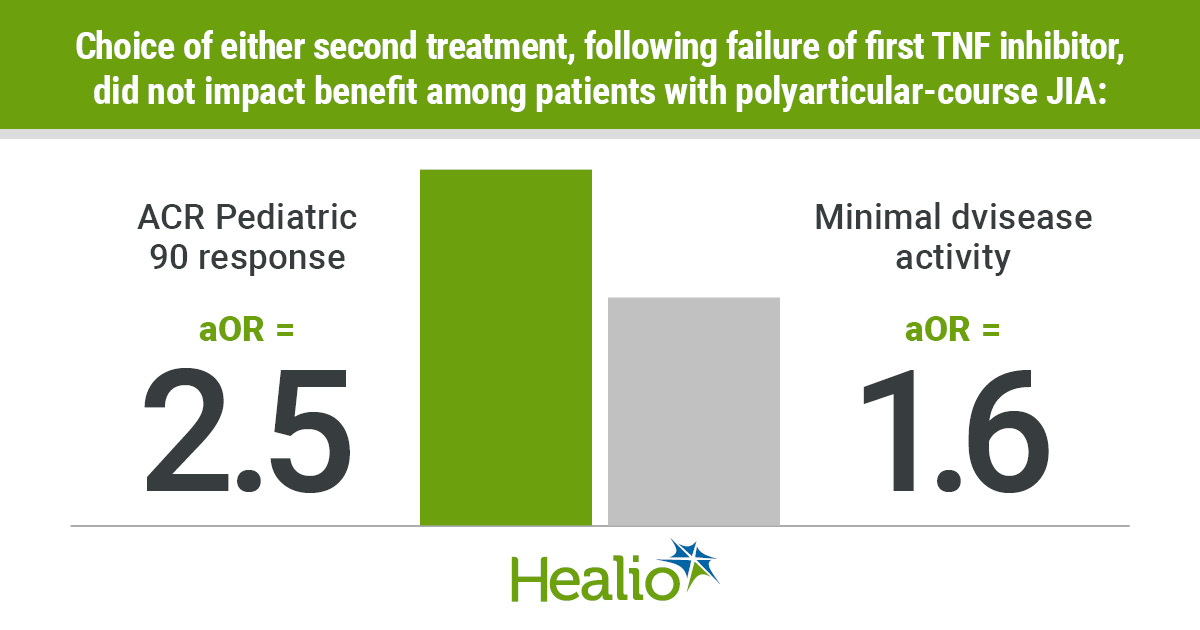 Many patients with juvenile idiopathic arthritis see little benefit from treatment with their first or second biologic, according to data.

To examine biologic switching patterns among children and adolescents with JIA, and compare the effectiveness of a second TNF inhibitor with a non-TNF inhibitor following the failure of a first TNF-inhibitor biologic, Kearsley-Fleet and colleagues analyzed participants in two parallel U.K. studies. These were the British Society for Pediatric and Adolescent Rheumatology Etanercept Cohort Study (BSPAR-ETN), established in 2004, and the Biologics for Children with Rheumatic Diseases (BCRD) study, initiated in 2010.

Focusing on 2,361 patients with JIA enrolled between Jan. 1, 2004, and April 11, 2019, the researchers assessed data on disease characteristics and DMARD therapy at the time of initiation of a first biologic, as well as 6 months, 1 year and annually thereafter. They analyzed changes in outcome variables at 6 months, compared with baseline, among participants who began their first biologic treatment on or after Jan. 1, 2004, were diagnosed with polyarticular-course JIA, and who had started a second biologic. They also compared the proportion of patients who achieved an American College of Rheumatology Pediatric 90 response and minimal disease activity at 6 months, based on the class of the second biologic.

According to the researchers, 1,152 participants began their first biologic on or after Jan. 1, 2010, with 91% starting their treatment with TNF inhibitors. The median follow-up was 2.2 years. During that time, 23% of the 1,152 patients were treated with a second biologic, while 5% started a third and 1% initiated a fourth. Among the 240 enrollees with polyarticular-course JIA, 81% began a second TNF inhibitor and 19% started a non-TNF-inhibitor drug after the initial TNF inhibitor failed.

“Currently the data available do not offer evidence to support choosing an alternative class of biologic over a TNF inhibitor should a first TNF inhibitor not offer effective control of disease, or not be tolerated,” Kearsley-Fleet said. “These findings should reassure clinicians that working within the current NHS England biologic prescribing guidelines appears to still be an appropriate thing to do. However, it does emphasize the need to continue to recruit children into clinical studies so that a large evidence base can be generated to better inform practice for this relatively uncommon disease.” – by Jason Laday

Platinum based cancer drugs market size to reach US$1.8 billion by 2026

Platinum based cancer drugs market size to reach US$1.8 billion by 2026