The iPath DJ-UBS Copper Total Return Sub-Index ETN (JJCTF), which tracks the performance of copper prices, has sold off significantly since the start of the year.

Our Q1-20 bullish thesis has been invalidated by the emergence of a double black swan (COVID-19 outbreak + collapse in oil prices), which has sent deflationary shock waves on the global economy, resulting in a spike in volatility across major risk assets in the process. More importantly, this has led to a deterioration in copper’s fundamentals.

We believe that the sell-off in JJCTF could run further in the coming months for three reasons. First, the LME copper price has broken a major technical support this month, destroying the technical chart. Second, the collapse in China’s manufacturing PMI suggests that the “fair-value” of the copper price is significantly lower than its current level. Third, copper’s spec positioning is not yet excessively bearish, suggesting that the market is vulnerable to further fresh shorting before a bottom is reached.

Against this backdrop, we set a maximum downside target for JJCTF at $19.5 per share. 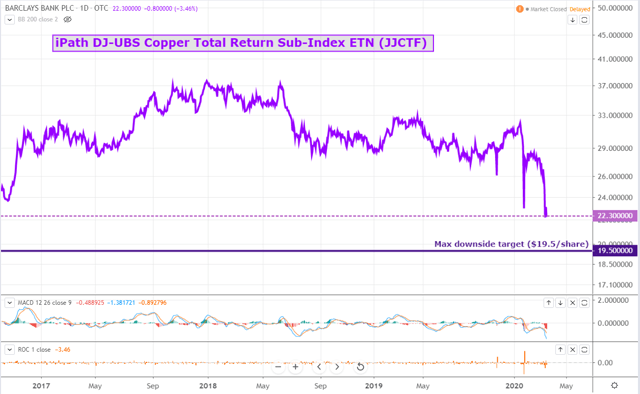 For investors seeking exposure to the fluctuations of copper prices, the iPath DJ-UBS Copper Total Return Sub-Index ETN is an interesting investment vehicle.

The fund summary for JJCTF is as follows:

JJCTF tracks copper prices well, as the chart comparing the ETN and the Index illustrates below: 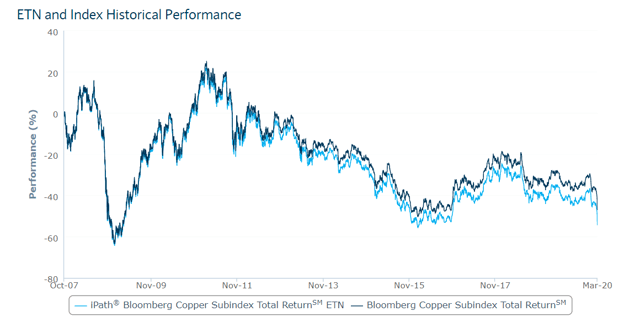 Our bullish thesis undermined by a double black swan

Back in early January, we expected a strong rally in copper on expectations for a powerful rebound in global economic growth after the US and China agreed on a Phase 1 trade agreement. The solid fundamentals of the refined copper market due to constrained mine output growth, the markedly low level of global copper inventories, and the positive seasonal patterns in Q1 were the main drivers underlying our constructive view on the red metal.

Unfortunately, copper’s positive narrative has been derailed by a double black swan: COVID-19 panic and the collapse in oil prices. This double black swan has led to a global panic in the financial markets, resulting in a substantial de-risking. In the process, the VIX surged to an all-time high, meaning the level of fear has been higher in Q1 than during the Great Financial Crisis of 2008. 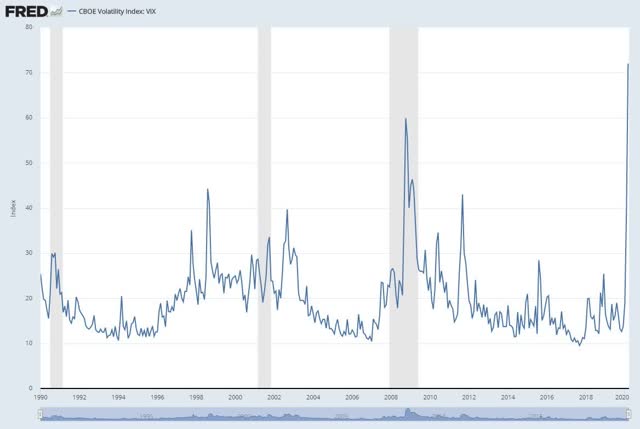 Against this, copper and the broad-based industrial metals complex have come under sharp downward pressure. Copper is the worst performer among its group so far this year. 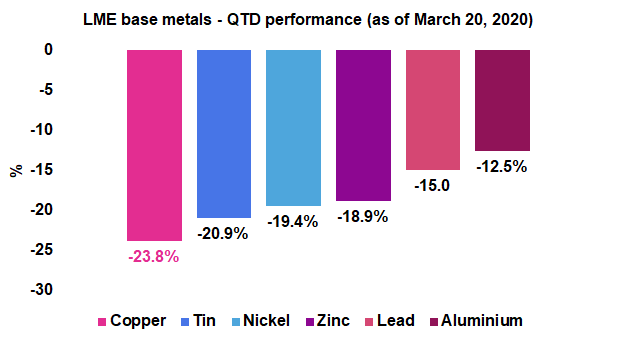 We think that copper has underperformed the industrial metals because it is the most sensitive to the macro environment. Like its peers, copper’s fundamentals have deteriorated since the start of the year, as evident in a marked increase in global inventories, consisting of LME, SHFE, and Shanghai-bonded stocks. 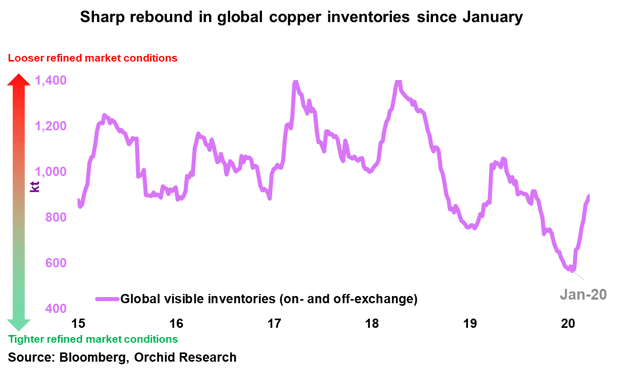 Global copper inventories jumped from ~570k tonnes at the start of the year to ~950k tonnes at present, a 63% increase. This reflects weaker refined copper demand conditions because copper fabricators have been induced to reduced operations due to low end-user demand. In contrast, smelters have, on average, continued to produce at a steady rate. As a result, excess supply has been stocked in warehouses, hence the increase in global copper visible inventories.

Why copper could fall further from here?

We highlight three reasons leading us to think that the sell-off in copper prices may not be over yet.

1) Breach of a major technical support 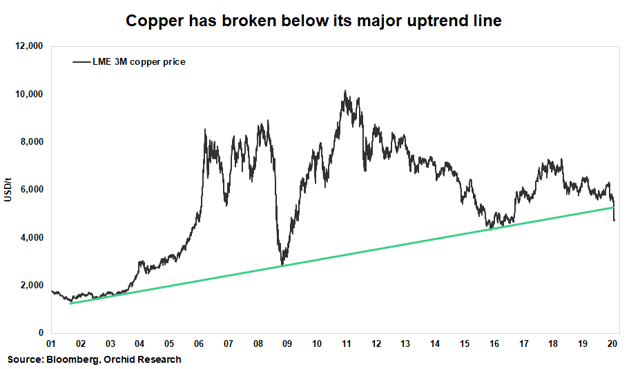 The LME copper price has just broken below its major uptrend line from its 2001 low. This support level was supposed to be solid considering that it was tested both in 2008 (GFC) and 2015-2016 (the slowdown in the Chinese economy).

The technical break below this level could suggest that deflationary pressures on copper prices will continue further in the months ahead. 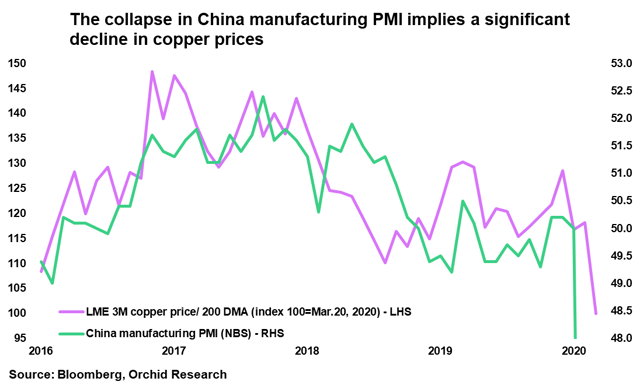 As China consumes around 50% of global refined copper production, copper prices and the official manufacturing PMI in China have co-moved tightly in recent years.

From this vantage point, we could argue that the copper price has not yet discounted the collapse in China’s manufacturing PMI to 35.7 in February.

3) Spec positioning not yet stretched on the short side 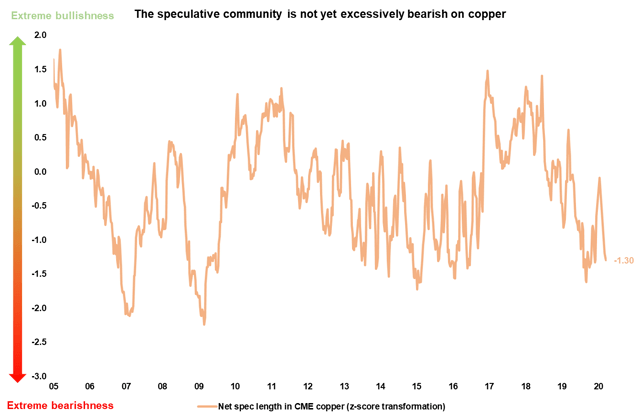 Although the global economy has experienced a “heart attack” and the resulting economic cost is likely to be substantial, the speculative community has not yet overreacted. Speculative positioning on CME copper is bearish but not as bearish as it was in 2015-2016 or in 2009. We use a z-score transformation of the net long fund position in CME copper held by non-commercials to gauge copper’s spec positioning.

From this perspective, this could suggest that copper prices are vulnerable to further fresh shorting in the coming months. While this would initially push copper prices lower, this would raise the likelihood that a bottom has been reached. This is not presently the case.

Our Q1-20 bullish thesis on JJCTF has been invalidated by the emergence of a double black swan, which is likely to have a significant economic impact over the next quarter or so. The “heart attack” experienced by the global economy has weakened materially copper’s fundamentals.

We believe that the sell-off in copper prices could run further considering that 1) a major technical support has been broken, 2) China’s manufacturing PMI implies substantial downside for copper prices and 3) copper’s spec positioning is not yet excessively stretched on the short side.

We set a maximum downside target for JJTCF at $19.5 per share.