Continued from Part One.

Another way in which graphite increasingly resembles rare earths is how China dumped graphite on the world market during the 90s, preventing any exploration or development of graphite projects in other regions of the world like Canada.

The availability of cheap graphite from China made it easier for countries like the US to import rather than invest in development of new projects in other regions of the world.

Take a look at this graph showing the trend in the rare earths industry: 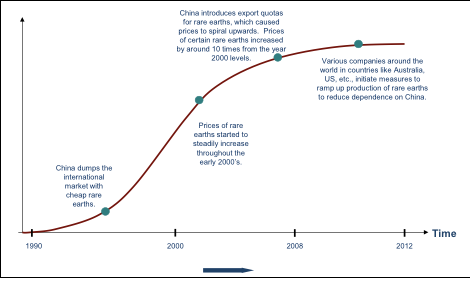 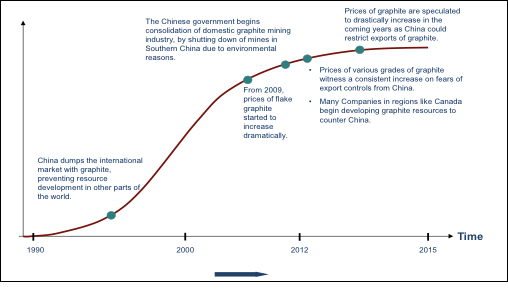 Increase in Prices of Graphite

Even on the prices front, graphite seems poised to follow the rare earths way. Prices of large-flake, high carbon graphite have increased from $600 per metric ton during the 1990s to around $2,500 per metric ton today. Industry participants believe that the increasing trend in graphite prices could continue in the coming years as China is expected to further tighten regulations regarding export of graphite.

A report by Industrial Minerals, a leading source of information on critical minerals, stated that the Chinese government is very keen on consolidating the domestic graphite industry and it is going ahead with its plans to reduce the number of graphite mines in Hunan province from 230 to around 20, with greater government supervision to reduce the environmental impact due to harmful mining practices. This is expected to lead to a loss of around 100,000 metric tons of graphite per year, or approximately 10 percent of global supply.

What It All Means

Given the clear indication that the graphite market resembles rare earths on many fronts, it is high time governments and exploration companies across the world fully understand the implications of a rare earth-style export quota from China and initiate necessary measures to increase supply of graphite in other parts of the world in order to prevent severe supply constraints in the coming years, which would have serious implications in terms of graphite procurement.

Many companies like Northern Graphite, Focus Metals, and Ontario Graphite in Canada, and Magnesita in Brazil, have already begun developing new resources of graphite to counter China’s dominance. Other measures such as recycling and building up of inventories also have to be actively encouraged to reduce dependence on China for graphite.

Investing in companies that are involved in developing graphite resources could be a win-win situation for both the company (as it provides the company with the necessary capital to continue operations) and the investor. Investing in such companies could be profitable as prices of graphite are expected to consistently increase in the coming years, due to the closure of mines in China; the companies that would start production in the next two to three years stand to benefit a great deal from the higher prices.

If the proper measures to ensure supply are taken immediately by various countries across the world, we may be able to prevent a rare earth-like predicament in the global graphite market.