Bet you were wondering about the cost drivers of operating gold mines. Worry not; here we go. Continued from Part One.

Over the past decade, gold producers have seen their mine operating costs rise by an average of 15% annually, mainly driven by rising labor, fuel and consumables costs and falling ore grades.

The fall in average grade of ore mined has been declining primarily due to the fact that most of the high-grade ores have already been mined, apart from the fact that rapidly rising gold prices made mining of lower grades a profitable option for most miners.

Ore grades have fallen nearly 50% since 2006 and have led miners to incur huge capital expenditures over mine expansions and exploration for new reserves in order to be able to maintain production levels. The global gold mining industry has seen its capital expenditures expand more than five-fold since 2006.

However, this has failed to translate into any improvement in the ore grades mined.

Besides, discoveries of new gold reserves reported over the past decade are just enough to replace about 50% of the current annual global mine production of the metal. A major portion of these new reserves are located in regions that are difficult to access and are uneconomical to mine at the current price scenario. 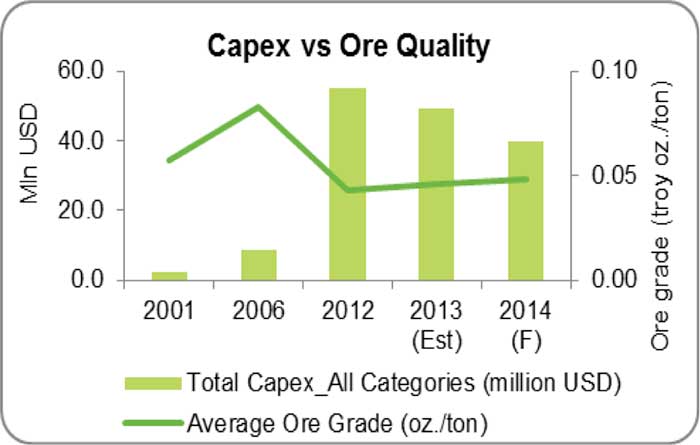 The industry has also been fraught with labor unrest around demand for higher wages and better work conditions. At the same time, major gold producing regions like South Africa and China have seen their fuel and electricity costs accelerate in recent years, further cutting into the operating margins. 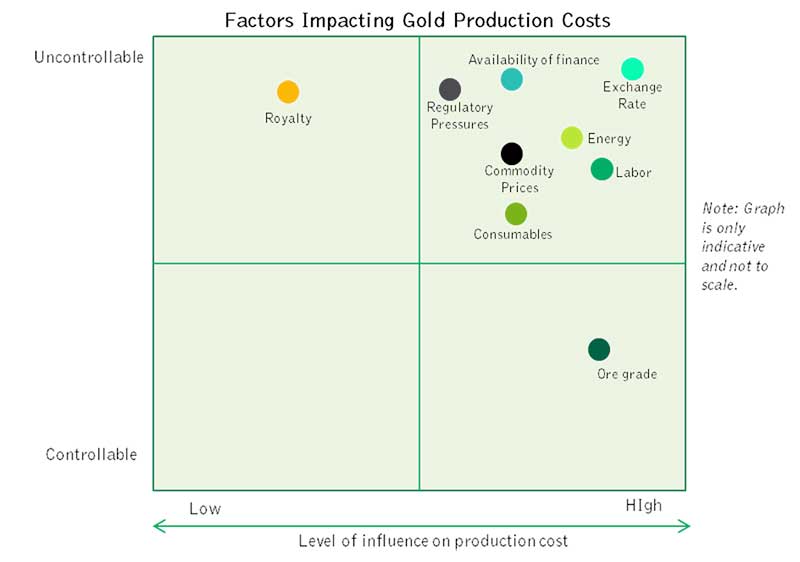 Which regions are likely to see production cutbacks?

South Africa, Australia and Papua New Guinea are currently the most expensive regions to mine gold.

With average sustainable production costs hovering around US $1,500-1,600 per troy ounce, most of the mines located in these regions are unable to generate positive cash flows. During the first nine months of 2013, the production of gold had declined by 24%, 25% and 9% on a year-on-year basis in South Africa, Ghana and Australia, respectively.

Although South African mines have some high-grade reserves of gold, most of them are located deep underground. These mines require additional safety measures and highly skilled labor, thereby pushing up operating costs.

Besides, electricity costs have spiraled over the past few years, making South Africa one of the highest-cost regions for gold mining operations. AngloGold Ashanti’s Obuasi Gold Mine in Ghana is currently known to have the highest cash operating costs globally.

Up next: Which gold miners will be the most profitable?

What is Regression Analysis: Everything You Need to Know – TechFunnel