Uncertainty means sometimes opportunity. Societa Cattolica di Assicurazione (OTC:SCZZF) is an Italy-based company primarily engaged in the financial sector. It provides insurance products. The Company’s activities are divided into three segments: Life, Non-Life and Other. It is active in the underwriting of life and non-life insurance, offering a range of insurance products and services to individual costumers and companies.

It became famous when Warren Buffet the most famous investor of all the time bought 9% of the company. Buffet – convinced by the ex-CEO of SCZZF, Alberto Minali – agreed to buy about 9 percent of Italian insurer Societa Cattolica di Assicurazioni Scrl from Banca Popolare di Vicenza SpA, one of two failed banks in the northern region of Veneto.

Minali had an ambitious plan to bring profitable growth to the company in a difficult time for the insurance industry where the auto sector was in contraction and life was tough given the low European rates. The key to the plan was based on speed and digitalization. Since the start of Minali’s tenure (June 2017) the company’s revenue grew more than 30% in only two years. 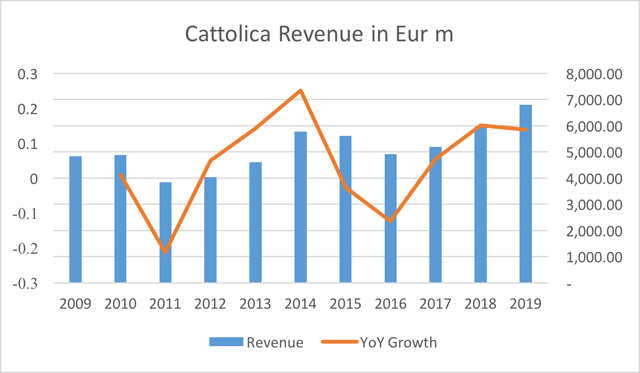 However, on November 1st, the board of directors decided to revoke the power to Minali:

The Board of Directors has ascertained and acknowledged that a divergence of views has progressively occurred with the Chief Executive Officer regarding corporate governance, strategic scenarios and relations with members and the market, resulting in a non-fluid, relaxed and positive position of the CEO towards the Board of Directors and in a lack of harmony and organic unity in the respective competences.

The market and shareholders reacted badly to the news. Ajit Jain, head of the Berkshire Hathaway insurance sector, wrote directly to the actual general manager Carlo Ferraresi, emphasizing that the turnaround was not particularly welcome in the home of the Omaha oracle. Currently, there is no clear view of the real reasons. The board said that Minali wanted to transform Cattolica from a cooperative to an s.p.a. while Minali denied. Many people believe that the reason is behind the relation between Minali and Paolo Bedoni. Paolo Bedoni, defined by a blog as the pope of Cattolica, has been Cattolica’s chairman for the last 13 years.

Based on some newspapers, it appears as if there was a fight between Bedoni and Minali. Bedoni has a privileged position in the company. He is entitled to many benefits and huge emoluments which looks like were not in line with the government policy of Minali. This could explain why the board of directors decided to revoke the power to Minali given the strong power of Bedoni.

What do we think about the current situation?

We know that Bedoni and Carlo Ferraresi (actual general manager with CEO powers) went to Omaha to reassure Buffett about the long term strategy of the company. However, we do not believe that actual governance is well suited to drive Cattolica profitability. For this reason, we would like to have Minali back as CEO.

We decided to hold our position and wait. This decision has been taken after we noticed that minority shareholders (2.5% of the capital) are calling for a meeting clearly taking sides with the former CEO Minali. The shareholder meeting is set to be on 6 and 7 March.

The points of the meeting are based on a series of rules that define “good governance”:

We believe that the meeting can be a catalyst. If the minority shareholders, with the help of Buffett, can change the governance of Cattolica, we can finally see the end of this story.

Cattolica business is almost equally split between non-life and life business. Given the commodity-like products of the life insurance industry, it is next to impossible for one insurer to successfully grow – without acquisitions – above the industry’s long-term annual revenue growth rate (which is little more than the nominal growth in GDP). Unfortunately, the return on capital for the non-life business is equally low compared to the overall market. Moreover, because of the low barrier to entry and low pricing power makes this business really competitive.

For all these reasons, we will not take into consideration the growth prospect but only the actual figures. Milliman’s research report says that the industry in Europe is using a Cost of Capital less than 6% (while a 6% cost of capital charge is prescribed under Solvency II). Cattolica’s ROE of 6.2% is just above the industry cost of capital.

We believe that the market is already pricing the worst-case scenario. Today’s Cattolica is trading at P/E of 7.6 and a P/B of 0.6. We decided to run a linear regression between ROE and P/B of the 41 traded insurance companies in Europe. Given our result, we believe that the company should trade around a P/B 1x, which implies a 50% upside. 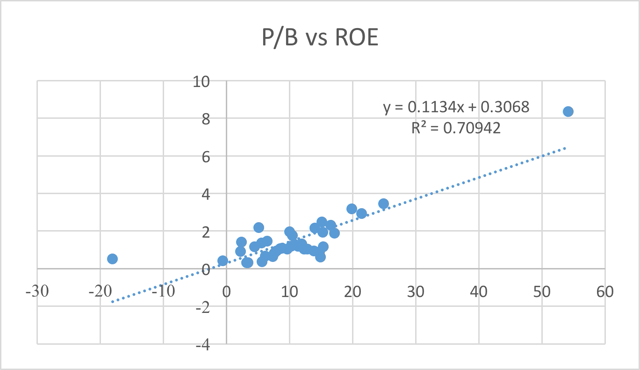 We take this opportunity to give an update on our portfolio EVP.

We decided to close our position in Assicurazioni Generali and open a position in Techedge. Unfortunately, given the small size of Techege and the lack of an OTC ticker, seeking alpha doesn’t cover this ticker. For this reason, we decided to write here in a nutshell why we believe this company will help the return in our portfolio.

Techedge SpA (EDGE.MI – IT0005331001) is an Italy-based company engaged in the software industry. The Company is a provider of information technology (IT) services. Its services include Systems Applications and Products in Data Processing (SAP) solutions, such as solution manager services in the areas of project consulting, managed services, monitoring, SAP basis support services, support services for SAP partners, enterprise cloud hosting services and data center transformation services, among other.

If we do not consider further growth after 2020 we are paying today this company only EUR 143m which imply EV/Sales of 0.6x and a P/E of 7.2x Why this opportunity exists? Given the size of the company and the niche market, there is only one analyst covering the stock. Moreover, investors are biased to think that small companies have high revenue correlation with the GDP of the country which is not always true. As we showed last year, by investing in Europe only an intelligent investor could gain 31% in one year.

We strongly believe that Europe can be a great source for value investors.

Disclosure: I am/we are long SCZZF. I wrote this article myself, and it expresses my own opinions. I am not receiving compensation for it (other than from Seeking Alpha). I have no business relationship with any company whose stock is mentioned in this article.