As LinkedIn Allows Richer Use Of Audience Data, Madison Logic Taps In 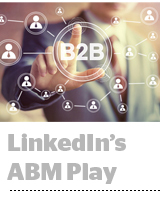 ABM is the B2B industry approach that focuses on specific job titles or account holders at a target company, rather than marketing by channel or around content like a white paper. LinkedIn, with its employer data, is the main hub for ABM, said Madison Logic CEO Tom O’Regan. But most marketers still haven’t been able to get the most out of the Microsoft-owned platform.

Madison Logic developed the LinkedIn API product over the past year, as it became clear that even brands with significant B2B marketing investments in LinkedIn weren’t able to see sales and analytics reports demonstrating the value of ABM campaigns on the platform, O’Regan said.

When clients clicked an ad going from LinkedIn to Schneider Electric’s site, for instance, the brand would lose the rich ABM data (employer and job title) that’s part of the LinkedIn data set, Luz said. It also includes data like overall attention time, so it can distinguish audiences who watched a webinar or read a full piece of B2B marketing research as opposed to briefly visiting a page.

The LinkedIn ABM integration can also connect programmatic ad exposures to LinkedIn users who shared a company’s content or signed up for a webinar, O’Regan said.

The ABM API tech helps seed new campaign strategies and target audiences, Luz said. If an ad campaign picks up traction in a specific vertical or with certain kinds of jobholders (i.e. people who make energy vendor decisions) then Schneider Electric can “align future placements” based on the kind of LinkedIn content being read or shared by those target audiences.

There are limitations to what LinkedIn allows. For example, LinkedIn users can’t be retargeted by Madison Logic across the web – but programmatic display ads can be informed by LinkedIn data points like how director-level executives are responding to a campaign.

“Thousands of B2B marketers use LinkedIn professionally and for themselves,” said Sudeep Cherian, LinkedIn’s head of global product marketing. “Marketers and sales professionals need to be able to prove and ultimately optimize their budgets around understanding that influence.”

Cherian said that’s led to the LinkedIn team investing more heavily in a partner program. Madison Logic is one of a “limited number” of marketing vendors allowed to build using its API, with a few others working in ABM as well.

LinkedIn, O’Regan said, is working more closely than it has in the past with marketing and measurement specialists who can augment the platform’s capabilities through its API.

He said LinkedIn is the most-used platform for B2B marketers, which means there’s a lot of value to be had with greater analytics, instead of B2B marketing teams using LinkedIn because it’s where they go for business-related news. “They’re the obvious choice for account-based targeting but it’s hard for them to prove it.”

Diabetes in OA: Pain Is Worse

Diabetes in OA: Pain Is Worse