Research has overestimated role of hopelessness in suicidal ideation

According to the researchers, previous suicide research hypothesized that hopelessness is an essential precondition for suicidal ideation in this patient population, but its exact impact remained unknown. To determine its explanatory power and predictive value, Baryshnikov and colleagues analyzed data from 406 patients with depressive disorder who were included in the Vantaa Depression Studies from 1997 to 2007. These patients completed the Scale for Suicide Ideation (SSI), Beck Hopelessness Scale (BHS), Beck Depression Inventory (BDI), Beck Anxiety Inventory (BAI), Perceived Social Support Scale-Revised (PSSS-R) and Eysenck Personality Inventory-Q (EPI-Q) at baseline, 6 months, 18 months and 5 years. In the present study, the researchers conducted a mixed-effects generalized linear regression and clustered receiver-operating characteristics analysis to test the predictive power of BDI and BHS for severe suicidal ideation within and between patients.

They found that BHS predicted clinically significant suicidal ideation (OR = 2.8) and explained 13.1% of between-patient and 3.5% of within-patient variance of SSI. A substantial part of the effect of BHS on SSI (adjusted OR = 1.38) was removed after the researchers adjusted for the fixed effect of BDI. BAI moderated the effect of BHS on SSI; however, PSSS-R and EPI-Q did not. Further, BDI detected suicidal ideation more accurately than BHS, the researchers noted. 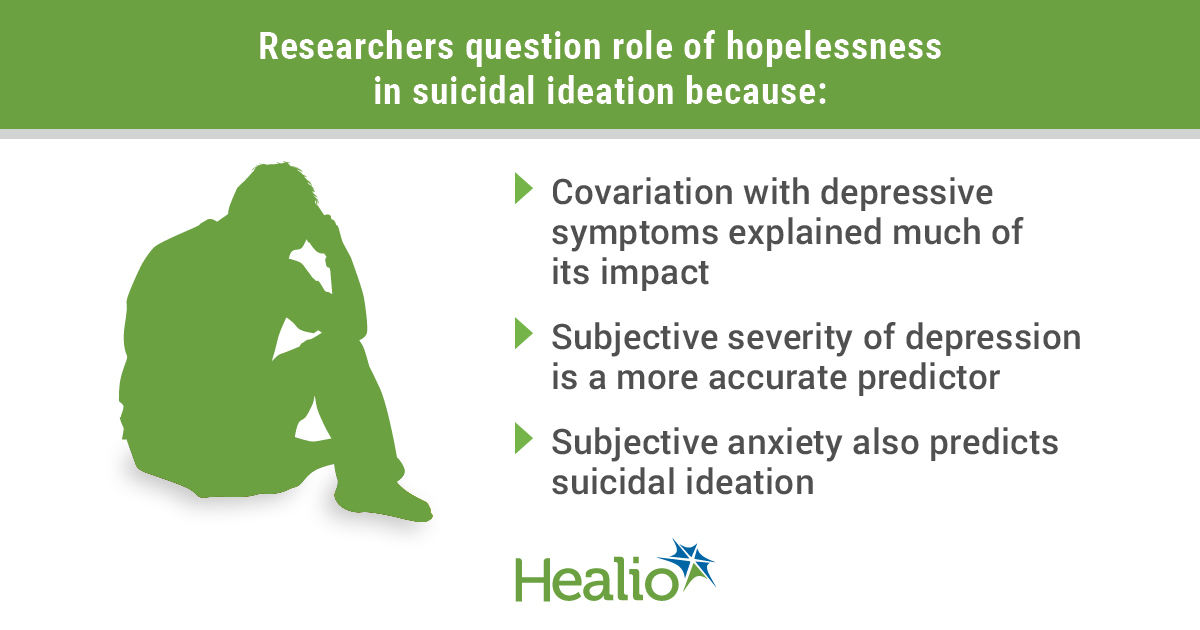 “Hopelessness seems to be more a trait-like than a state-like risk factor for severe suicidal ideation, thus informing primarily about enduring predisposition,” they wrote. “In clinical situations in which the focus is often on concurrent or short-term risk, current severity of depressive symptoms may predict suicidal ideation more accurately than hopelessness.” – by Joe Gramigna