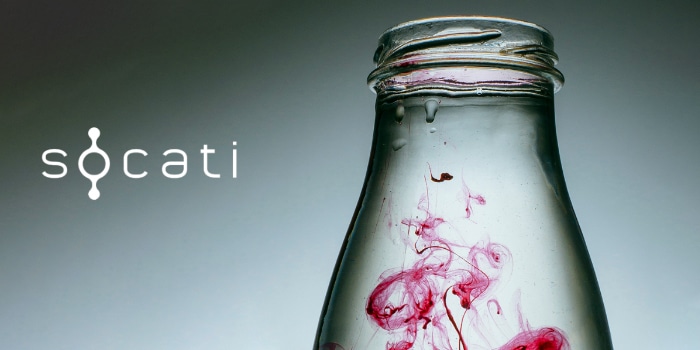 Considering their fast surge to ubiquity in beverages, it can be easy to forget at times that THC and CBD are merely two of over 100 (so far) identified cannabinoids that exist in the cannabis plant. Those other compounds — CBG, CBN, CBC and CBL, to name some — may not be household names quite yet, but if they come anywhere close to the projections for the CBD market (approximately $24 billion by 2023), then they are certainly going to be big.

At least, that’s what Texas-based hemp supplier Socati is betting on. The company is aiming to set itself up as a long-term player in the space by focusing on creating custom minor cannabinoid profiles for its clients through the launch of a new full-service private label division capable of producing a variety of products, including gummies, tinctures, capsules, tablets and crystalized flavored powdered that can be added to liquids or consumed orally.

On the market today, THC-free CBD products are either isolates — or 99.9% pure CBD — or “full” or “broad” spectrum, which effectively means a formulation that also includes a proportion of other cannabinoids (including > 0.3% THC), terpenes and flavonoids working together to create the “entourage effect.” To be more precise, “full spectrum” is defined as having all cannabinoids, including THC, while “broad spectrum” excludes it. Yet, while the amount of CBD is fixed, the exact combinations and ratios of other various minor cannabinoids in such products are often different from one package to the next. Thus, though in mostly subtle ways, each individual bottle of a tincture, beverage or other CBD product from the same brand can theoretically produce different effects on the body.

This is where Socati sees an opportunity to differentiate itself, according to Mark Elfenbein, the company’s chief revenue officer, by dialing formulations in to exact cannabinoid ratios to provide a consistent and efficacious user experience.

“One of the unique things about our technology is that we are able to separate minor cannabinoids and then effectively reproduce the product to spec,” he said. “If there is a customer requiring a certain amount of minor cannabinoids, either in total or specifically, we can do that.”

Even more than with CBD, greater research and clinical trial is needed to better understand the range of other minor cannabinoids that can be derived from cannabis, with each playing a different role within the endocannabinoid system. Some studies suggest that CBG (cannabigerol) offers antibacterial and antispasmodic effects, while CBN (cannabinol) can work as a natural aid for sleep, which is among the main points of entry for medicinal or semi-medicinal cannabis use, according to New Frontier Data. Further down the line, there’s also THC-V, which has shown promise as an appetite suppressant in tests using rats, and THC-A, which has purported neuroprotective and anti-inflammatory effects. Adding another layer of complexity for formulators, those effects can sometimes be enhanced by the presence of other cannabinoids, including THC.

Commercially, Socati has taken a hybrid approach; in addition to producing to spec, it has also conducted its own internal and collaborative research to explore potential use cases for cannabinoids. Other suppliers, such as Apricity and Exactus, are also marketing their own CBG-rich formulations in water soluble formats.

But Socati has been moving fast. Founded in 2011 in Woodburn, Oregon, Socati has raised a total of $42 million over two funding rounds, the most recent being a $33 million Series A round in January 2019. In the months following the investment, the company bolstered its infrastructure — acquiring specialty compound manufacturer Blue Marble Biomaterials, including its 22,000 sq. ft. production facility and testing laboratory in Montana — while moving its executive headquarters to Austin, Texas.

As research and innovation advances, ideally, brands will be able to fine-tune products to deliver the specific on-trend functional benefits that consumers are demanding.

“The ability to really precision control the cannabinoid ratios is very interesting to many of the larger brands out there,” said Elfenbein. “In 2019, we saw a lot of interest in CBG and specifically more of a cognitive boost for a morning routine. And what we are seeing now is cannabinoids like CBN that are useful for a nighttime routine. As we learn more about some of the effects of the minor cannabinoids, different use cases and different brands are emerging.”

Yet despite the interest around them, the arrival of cannabinoids like CBG and CBN still feels premature in a marketplace that is still just learning about and beginning to understand CBD. According to a survey conducted by ATKearney, consumer awareness of and interest in CBD has increased: 68% of respondents in the U.S. and Canada said they have used or know someone who has tried CBD, and 73% reported positive experiences using CBD and an intention to reuse. However, while 72% of respondents said they believe that CBD has wellness and therapeutic benefits, only 29% signaled they are very informed of the uses and potential benefits.

Online, the conversation volume around CBG is growing but still significantly smaller than that of CBD and THC, according to social analytics firm Social Standards. Nearly 4% of those conversations mentions topics related to both “pain relief” and “THC-free.” In terms of consumption methods, “topical” and “gummy” appeared in conversations about CBG more than “vaping,” suggesting that the cannabinoid may be more closely associated with medicinal use than recreational. The volume of discussion around CBN and other minor cannabinoids, meanwhile, is too small to produce relevant data.

As a supplier, Socati has not invested heavily in end consumer education, instead relying on media outlets and sales associates at stores that sell hemp/CBD-based products to help educate the public. Instead, the company has focused its attention on building out its holdings, which includes 25 patents and patents pending in purification and extraction techniques along with its acquisition of Blue Marble. Socati has also pulled together a network of vetted co-packers and flavor houses that can help work with clients, depending on the size of the production run.

“For our customer, all they have to do is market and sell the product,” said Elfenbein. “We could add various functional ingredients like probiotics and electrolytes and still custom control the minor cannabinoid ratios, which is unique. To date, most of the products have been isolates, so we are trying to take that to the next level and allow brands to create differentiation on store shelves.”

While ready-to-drink CBD beverages are still growing, Elfenbein sees the powdered stick format as a versatile “evolution of the tincture.” Discreet, convenient and available in flavored or flavorless versions, the powders also help brands to communicate proper dosage with a single-serving size and can stimulate innovation; for example, the company is working on a coffee-specific additive that can reduce some of the drink’s bitter notes. With so many more cannabinoids still yet to be explored, the innovation pipeline — and consumer demand — is expected to keep accelerating.

“I would say that in the first half of 2019, almost nobody knew about CBG and CBN on a consumer level,” said Elfenbein. “By halfway through 2019, a lot more free-standing CBD store locations started popping up where retail could control their own store associates who were pretty educated and could inform guests, as opposed to the more typical CVS situation, where the consumers are maybe more educated than the associates. There’s also more data online about cannabinoids. People are discovering what CBG and CBN and some of the other cannabinoids can do and are seeking products.”