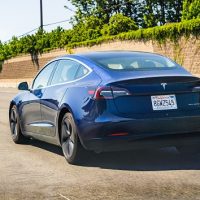 Andrei Stanescu/iStock Photo(WASHINGTON) — Tesla has been subpoenaed by the U.S. Securities and Exchange Commission for financial information, the electriccar maker disclosed in a filing this week.

It comes, however, as the company’s stock has unexpectedly skyrocketed over the past year — its value more than doubling since February 2019 and especially made aggressive gains over the past few months. On Friday, its stock was trading at more than $800 a share, compared to less than $300 in October 2019.

The stock offering “will be a bit of a shock to some given the company talked about no need to raise capital on its recent conference call,” analyst Daniel Ives, managing director of equity research at Wedbush Securities, said in a commentary.

However, he added that some say this “essentially rips the bandaid off and takes the doomsday cash crunch scenario some predicted down the road now off the table.”

“In our opinion the size of this offering is larger than many had anticipated, but we believe it’s a smart move by Musk,” he added.

In the same filing announcing the new SEC subpoena, Tesla also noted that a separate SEC investigation into Musk’s prior statements that he was considering taking Tesla private had been concluded.

The Global Anti-Fatigue Cosmetics Market size is expected to reach $18.4 Million by 2025, rising at a market growth of 4.48% CAGR during the forecast period