The Deep Seas Are Alive With Light

In 1932, William Beebe wedged his lanky body into a cramped submersible and became the first scientist to descend into the sea’s inky darkness. A tiny window let him gaze out. Later, he described an unfamiliar world of dancing lights, pale glows and beguiling shimmers.

“It seemed to explode,” he said of one luminous creature. Nothing, he added in his book, “Half Mile Down,” had prepared him for the spectacular displays. The colors included pale greens, blues, reds and especially blue-greens, which by nature can travel far in seawater.

Over the decades, biologists learned that the creatures of the deep sea use light much as animals on land use sound — to lure, intimidate, stun, mislead and find mates.

The living lights emanated from tiny fish with needlelike fangs, and gelatinous brutes with thousands of feeding tentacles. The sheer variety suggested that bioluminescence was fairly common, but no scientist came up with a measurement of the phenomenon.

Now, 85 years after Dr. Beebe’s pioneering dive, scientists have succeeded in gauging the actual extent of bioluminescence in the deep ocean.

During 240 research dives in the Pacific, they recorded every occurrence and kind of glowing sea creature — more than 500 types living down as deep as two miles. Then, the researchers merged the results into a comprehensive survey.

The result? Most of the creatures — a stunning 76 percent — made their own light, vastly outnumbering the ranks of the unlit, such as dolphins.

“People think bioluminescence is some kind of exotic characteristic,” said Séverine Martini, a marine biologist and lead author of the study, published this year in Scientific Reports. “Even oceanographers don’t realize that it’s common.”

Her own awakening came one night in a sailboat off Africa. “I was looking at the stars and learning about constellations,” she recalled, and then suddenly began “seeing things that were glowing in the waves.” 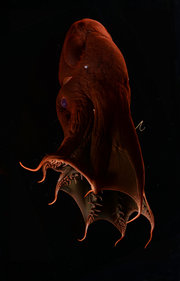 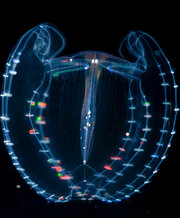 Deiopea, a comb jelly. These colors are produced by the diffraction of light on hair-like cilia.
Steven Haddock/Monterey Bay Aquarium Research Institute 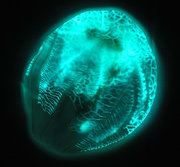 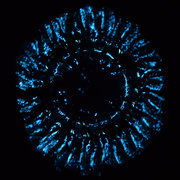 Helicocranchia, a genus of tiny transparent squids. Some have light-emitting cells near their eyes.
Steven Haddock/Monterey Bay Aquarium Research Institute

As the deep sea is the planet’s largest habitat, the new findings confirm bioluminescence to be one of the earth’s dominant ecological traits, despite its unfamiliarity, according to Dr. Martini and her co-author, Steven H. D. Haddock, both of the Monterey Bay Aquarium Research Institute in California.

“A lot of these questions are centuries old,” Dr. Haddock said. “You see sparks in the water and have no idea what they represent.”

Over the decades, scientists have traced the evolutionary roots of the living oceanic lights to primal seas hundreds of millions of years ago, long before the age of dinosaurs.

By contrast, terrestrial bioluminescence is relatively new. And the land creatures that light up, unlike their undersea kin, constitute a tiny minority. The ranks include not only fireflies but also some beetles, millipedes and earthworms.

The research institute — in Moss Landing, Calif., at the midpoint of the Monterey Bay shoreline — is a pioneer of deep ocean exploration. It was established in 1987 by David Packard, the billionaire co-founder of Hewlett-Packard and a creator of Silicon Valley.

Dr. Haddock is a world authority on bioluminescence who has published dozens of scientific papers on luminescent ocean life. A decade ago, he set up the Bioluminescence Web Page, which offers detailed information about deep creatures, including dozens of dramatic images. It is required reading at some universities.

The 240 dives used to perform this survey were all research trips he had conducted personally since arriving in 1999 at the institute. Sailing out from Moss Landing, the cruises ranged up to 180 miles offshore and covered an area roughly the size of Ireland.

The sea floor off Monterey Bay, 60 miles south of San Francisco, drops off sharply, unlike the shallow continental shelves on most coasts. That makes it easy for research vessels to quickly reach and access deep environments.

For years, Dr. Haddock and his colleagues lowered robots on long tethers to explore the icy darkness. Sensitive cameras on the vehicles let the scientists conduct wide visual hunts. In all, the researchers made more than 350,000 sightings of deep-sea life.

Their finds included anglerfish, a famous example of bioluminescence. These skilled hunters lure prey by dangling lines tipped with glowing lures in front of large mouths full of daggerlike teeth.

A rare sighting was Vampyroteuthis infernalis — Latin for “vampire squid from hell.” The odd creature has blue eyes, a dark red body and cloaklike webbing over its arms. The tips glow.

Dr. Haddock and his colleagues have discovered that the squids also emit luminous blue particles that can form a glowing cloud around the animal, apparently to distract predators so the squid can vanish into darkness.

Many of the dives found swarms of gelatinous animals known as siphonophores. The otherworldly creatures have long bodies ringed by pulsing bells for propulsion, and up to thousands of elastic tentacles for catching and drawing in prey.

Most siphonophores light up brightly. Scientists judge their startling brilliance to be a way to scare off predators. Dr. Haddock and his colleagues uncovered another reason while studying a creature known as Erenna.

The ends of its tentacles turned out to bear twitching red lights, apparently for drawing prey into waiting stingers and its stomach. “It opened my eyes,” Dr. Haddock said.

On land, Dr. Martini took the lead in compiling the numbers, comparing the sea creatures seen during the dives with a list of animals known to be luminescent.

This comprehensive list was based on a review of previous scientific reports, as well as the firsthand observations that Dr. Haddock and other scientists have made over the years.

In the conclusion to their study, the scientists at the institute acknowledged that all their expeditions and efforts at summarization have produced no more than a rough estimate of the phenomenon’s true dimensions.

“The full extent of bioluminescence capability is yet to be established, especially in the deep sea where continued discoveries await,” Dr. Martini and Dr. Haddock said in their report.

For decades, the human eye worked far better than any video camera at recording the subtle lights of the deep life. But in recent years, Dr. Haddock said, camera sensitivity has begun to rival that of the human eye and will eventually surpass it.

He said the advances would let scientists document lights previously seen only fleetingly, as well as discover new kinds of luminous displays. Continued progress, he added, will be a living memorial to Dr. Beebe and the hidden world he discovered of glows, flares and shimmers in the sunless depths.

“We’re still addressing the kinds of observations he was making,” Dr. Haddock said. “There’s still a lot to learn.”