In the space of six months, Saudi Aramco (ARMCO) has had to deal with two of the most dramatic “Black Swan” events impacting the world oil market. In September, about 5 million barrels a day of oil supply was temporarily disrupted by a military strike in Saudi Arabia. And in late January and early February, it is estimated that about 2 or 3 million barrels of consumption has been disrupted in China, Armco’s biggest customer. And only Aramco has the swing capacity to quickly adjust production.

Reports from Vienna are that OPEC+ as a group has yet to finalize how they will respond. OPEC’s Joint Technical Committee has recommended “extending voluntary production adjustments under the ‘Declaration of Cooperation’ process until the end of 2020 and to proceed with an additional adjustment until the end of the second quarter.”

Russia now says it will go along with an additional 600,000 b/d cut. But we know Russia did not abide by their share of the cuts in 2019, and it’s highly doubtful they would comply with a deeper cut now. They have said they can’t do it without damaging their oil fields.

In the end, it will be Saudi Aramco which bears the burden. And even then, a 600,000 b/d cut versus a 2-3 million barrel a day disruption will do little to prevent a massive build in global stocks in the short run.

As a result, I hold a long position in a leveraged short oil exchange-traded fund, the ProShares UltraShort Bloomberg Crude Oil ETF (SCO). Whether it is a suitable product for others to hold depends on the investor’s objectives, risk tolerance, and other factors, such as the interest in trading and making decisions quickly, among other criteria, as discussed further below.

Bloomberg: “Chinese oil demand has dropped by about 3 million barrels a day, or 20% of total consumption, as the coronavirus squeezes the economy, according to people with inside knowledge of the country’s energy industry.”

Bloomberg: “Chinese refiners have cut the amount of crude they’re turning into fuels by about 15% — a reduction of about 2 million barrels a day — as the deadly outbreak hinders the movement of people and hits demand for travel.”

Goldman Sachs: Demand shock of 2-3 million barrels per day which will likely reverse in “a few months.”

Gary Ross: “Estimates that Chinese oil demand over the last two weeks has been down around 2.5 million barrels a day, or close to 20 percent compared with the previous year.” Ross was formerly the head of PIRA, the oil consulting firm.

Schneider Electric: “While virtually all market estimates now see a significant downward revision to Chinese crude demand growth in 2020, the scale of that decline remains unclear. If that outbreak continues to be a major factor into the second half of the year though, it could not only wipe out Chinese demand growth, but could potentially drop global demand growth expectations by more than 50% for the year. That’s particularly worrisome for OPEC+ members, many of whom consider the Chinese market to be a priority both for it’s absolute demand and future growth potential.”

ING: “Refinery run rates for independent refiners in Shandong stood at 50.33% as of Feb. 7, down from 64.56% ahead of the Lunar New Year holidays. A buildup in stocks of petroleum products as a result of the coronavirus spread and subsequent shutdowns across China has forced refiners to cut run rates.”

I updated my linear regression between global OECD oil inventories and WTI crude oil prices for the period 2010 through 2019. As expected, there are periods where the price deviates greatly from the regression model. But overall, the model provides a reasonably high r-squared result of 79 percent. 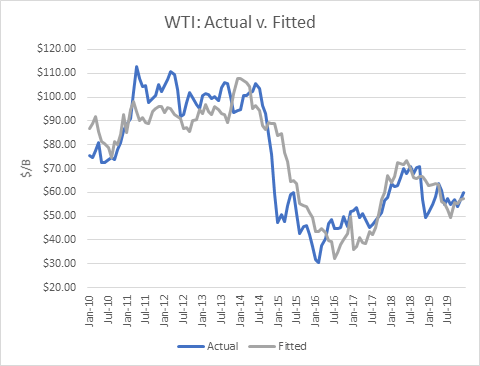 For the purpose of developing an estimate, I assumed there will be an oversupply of 2 million barrels per day for three months. In that period, global stocks would build by 180 million barrels more than they were expected to build prior to the outbreak.

The price impact using the above model yields a WTI price of $50 in February, $42 in March and $33.50 in April. Even if Saudi Aramco were to cut exports by 2-3 million barrels per day very soon, at least half of the impact is locked in due to delivery time lags, implying WTI will drop below $40/b.

For those who are interested in going short WTI crude oil but do not want to manage an oil futures account, there is a double-short exchange-traded fund, SCO. According to Yahoo Finance:

“The investment seeks daily investment results, before fees and expenses, that correspond to two times the inverse (-2x) of the daily performance of the Bloomberg WTI Crude Oil SubindexSM. The fund seeks to meet its investment objective by investing, under normal market conditions, in futures contracts for WTI sweet, light crude oil listed on the NYMEX, ICE Futures U.S. or other U.S. exchanges and listed options on such contracts. It will not invest directly in oil.”

Its top six holdings are as follows:

(The crude oil contract CLHO is actually the March contract.)

SCO is a leveraged product, and so, the volatility may be very high. It is not appropriate for novices. Oil prices are volatile, and SCO has twice the volatility of oil prices.

I plan to monitor estimates of the demand destruction in China on a continuous basis, as well as other supply responses, such as the production cutback being considered by the OPEC+ group of producers. I will make changes to my model as discussed above, which will give me a fair market valuation of WTI crude prices. I will consider closing the position if the WTI price falls below the fair market value, depending on my trading criteria. I provide real-time updates of trades in my model portfolio in my SA Marketplace service, which is long SCO. The model portfolio has a net gain of 84.2% since its inception 3 years ago. That compares to a return of -23.9% for an investment in the Energy Select Sector SPDR ETF (XLE) over the same period.

The nature of the virus implies that the quarantine in China and travel restrictions are like to remain in place “for months.” If they do, and the estimated oil demand impacts are in the right ballpark, a huge oil inventory glut will be created. Based on my model, that would send WTI prices into the low $30s. The SCO position has the potential to provide a high return, but it is a risky one to hold.

To guide investors who are interested in profiting from outstanding opportunities in the energy sector, I provide a service on Seeking Alpha’s Marketplace oriented toward individual investors, Boslego Risk Services. A long/short Model portfolio is continuously updated, along with on-going analysis of the oil market.

I am now accepting new members to Boslego Risk Services and invite you to sign-up. There are monthly and annual pricing options as described here. You may also read reviews posted by members here.

Disclosure: I am/we are long SCO. I wrote this article myself, and it expresses my own opinions. I am not receiving compensation for it (other than from Seeking Alpha). I have no business relationship with any company whose stock is mentioned in this article.