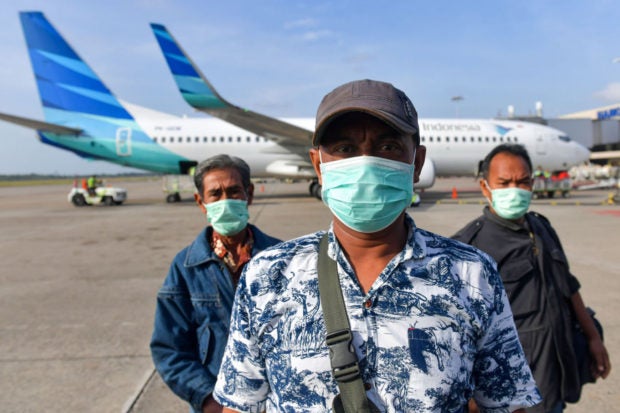 JAKARTA — Almost a month after the first novel coronavirus case outside of China was confirmed in Thailand on Jan. 13 and amid the virus’s subsequent spread to a number of other countries, Indonesia seems to remain free of the fast-spreading illness.

While the fact that there are zero known cases in the country has brought relief, it has also raised questions about what sets Indonesia apart from countries with confirmed cases, especially as 85 cases had been recorded across six neighboring Southeast Asian countries as of Friday.

A study by a group of researchers from Harvard University suggests that Indonesia should have confirmed cases of the novel coronavirus by now, given the high number of airline passengers traveling between the country and Wuhan, the epicenter of the outbreak in China.

The study, carried out by researchers at the Harvard T.H. Chan School of Public Health, revealed that Indonesia’s zero confirmed cases “may suggest the potential for undetected cases in these locations given the expected connection before travel control measures were implemented”.

However, the study has not been peer-reviewed. It was published on pre-print server medRxiv on Wednesday.

The findings are based on estimated air travel volume from Wuhan to international destinations and a generalized linear regression model to predict imports of novel coronavirus cases across 26 locations.

With an average daily number of passengers of about 100, the model showed that Indonesia should have confirmed one to 10 infections with the novel coronavirus.

“We recommend that outbreak surveillance and control capacity should be rapidly strengthened in those locations lying below the 95 percent [prediction interval] lower bound to ensure cases are detected if occurring and avoid the emergence of self-sustained transmission,” researchers said in the study.

Much of the concern has been directed toward the competence of the Health Ministry’s laboratory, the only one authorized to run tests on suspected cases, in detecting the new virus, 2019-nCoV.

The ministry has repeatedly brushed off these concerns. Its communicable disease prevention and control director, Wiendra Waworuntu, said on Thursday that the lab had received 2,000 primers for testing from the US Centers for Disease Control and Prevention (CDC) in January.

The ministry’s lab has tested 50 specimens as of Friday; 49 of them tested negative while the remaining test was still awaiting results.

Wiendra said Indonesia had learned from its previous encounters with outbreaks, including the 2002-2003 Severe Acute Respiratory Syndrome (SARS) outbreak. During the SARS epidemic that killed 774 people in 17 countries, Indonesia recorded only two probable cases according to WHO data.

A 2011 study conducted by the University of Hong Kong and published by open-access publisher Hindawi showed that the high temperatures and high relative humidity in Indonesia might be the reason it did not have nosocomial outbreaks of SARS. The case was possibly different in Singapore and Hong Kong, where there was an intensive use of air conditioning, as transmission occurred in well air-conditioned environments.

This was because the study found that “high temperature at high relative humidity had a synergistic effect on inactivation of SARS coronavirus viability while lower temperatures and low humidity support prolonged survival of the virus on contaminated surfaces”.

While acknowledging that there was still much to be learned about the new strain of the virus, R. Wasito, a veterinary professor at Gadjah Mada University who had previously studied coronaviruses, said the novel virus might not last long in Indonesia due to exposure to heat and the sun.

There was also the possibility, still in need of scientific evidence, that stress during winter season might weaken one’s immune system thus making transmission easier, he said. China is currently in the winter season, which usually lasts until March.

While the novel coronavirus came from the same family as SARS, WHO representative to Indonesia Navaratnasamy Paranietharan told The Jakarta Post via email on Thursday that the two outbreaks could not be compared as “many factors of the 2019-nCoV are still unknown”.

Vivi Setiawaty, the head of a biomedical research center at the ministry’s Health Research and Development Agency (Balitbangkes), argued it was too early to determine the virus’ characteristics.

She said that although viruses would be inactivated at temperatures between 50 and 70 degrees Celsius and that more cases were confirmed in countries with cooler weather, there had also been confirmed cases in tropical countries with similar weather to Indonesia. The Philippines, for instance, had recorded the first death from the novel coronavirus outside of China.

Vivi emphasized the role of people’s immune systems in countering the virus while also attributing the zero cases in Indonesia to the country’s preparedness in preventing the outbreak.

Health Ministry disease control and prevention director general Anung Sugihantono mentioned three factors influencing disease transmission, namely the agent – the virus itself – the host and the environment, with the last two factors still leaving many unanswered questions in the effort to understand, scientifically, why Indonesia had not recorded any cases.

“When we talk about hosts [of the virus], the immune system against the novel coronavirus is different from one person to another, one ethnicity to another. This is what we’ll be studying further, whether these factors have led to no cases being found in Indonesia,” Anung told journalists on Thursday.

“In terms of environment, we live in a tropical country and the people commonly have activities outdoors. Where these have influences in virulency must also be reviewed scientifically,” he added.

The ministry, Anung said, was also actively looking into deaths from pneumonia amid the outbreak, claiming there had been no significant increase in such deaths. However, he did not immediately provide data.

The novel coronavirus can cause severe pneumonia or breathing difficulties for some people, according to the WHO.

“From my experience during the avian influenza outbreak, there were too many meetings and seminars. Viruses can be very dynamic, and so the key is coordination,” he said.

He suggested the government appoint a leading sector to orchestrate efforts at all levels of administration.

The ministry said it had continuously worked alongside local health agencies to monitor people who had traveled to countries affected by the virus. It said it would also train local medical and lab workers on the novel coronavirus, opening up the possibility of the expansion of lab testing into other areas.

Don’t miss out on the latest news and information.