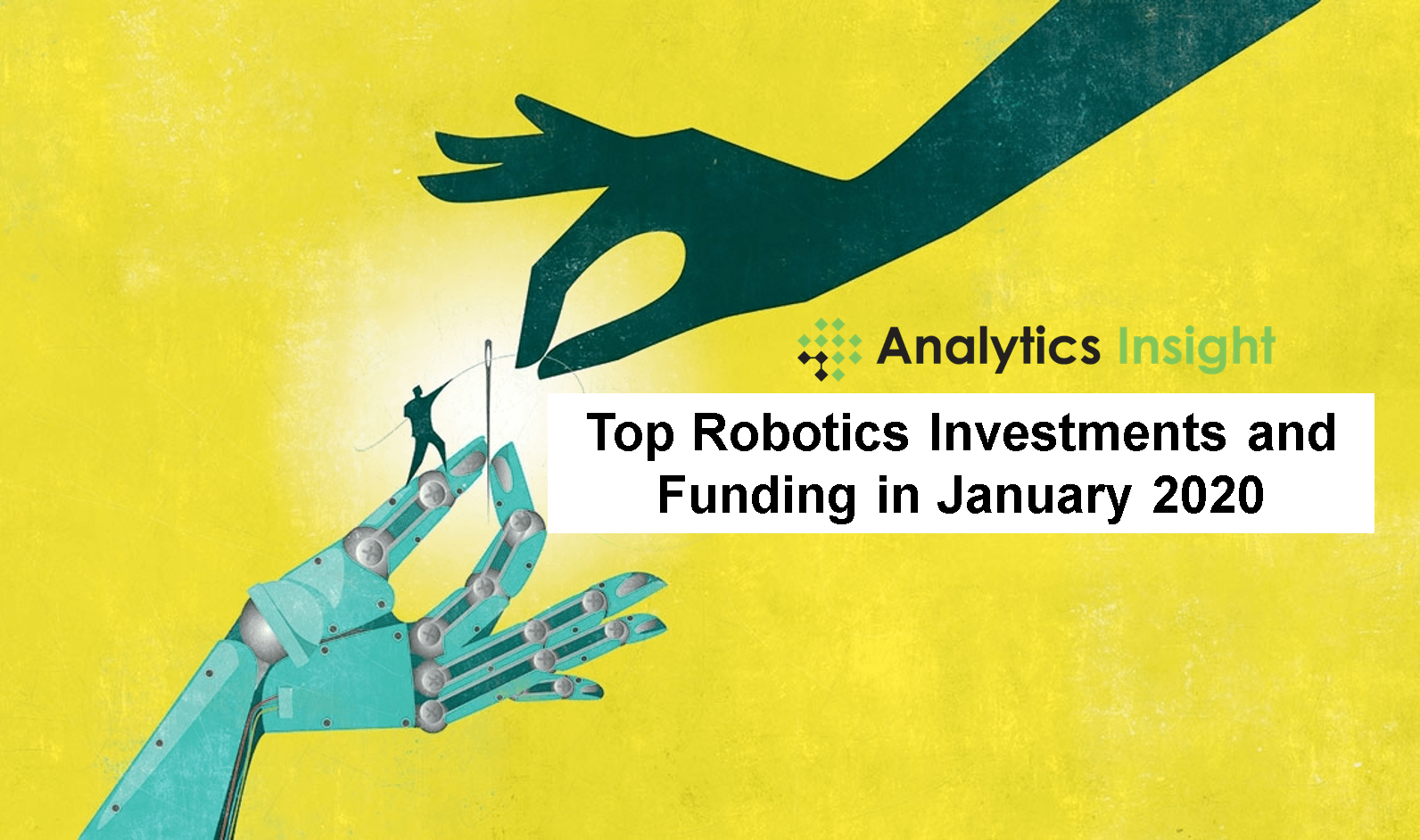 As robotics is getting smarter, more and more investors are coming forward to raise funds for emerging robotics companies in order to catalyse their robotics innovation journey.

In January 2020, Robotics Business Review tracked a total of US$1.16 billion in corporate transactions related to robotics. While there were fewer deals around autonomous vehicles than in past months, investors continued to support supply chain and logistics, surgical robots, and agricultural automation.

By comparison, Robotics Business Review and sibling site The Robot Report reported US$1.9 billion in transactions in December 2019, and US$644 million in January 2019. The number of investments climbed to 40 last-month, compared with 24 in the previous month and 25 a year ago.

Here are the top 10 robotics funding/investments that took place in January 2020.

The Santa Clara, California-based robotics perception company (with offices in Shanghai and Beijing), whose bread and butter is autonomous vacuum cleaners, took the wraps off Lucy, a US$799 robot equipped with cameras that enable it to surveil rooms while recognizing and cleaning them. Alongside this news, Trifo announced that it has raised US$15 million in a series B round led by Yidu Cloud, with participation from Tsinghua AI Fund and Matrix Partners. This brings its total raised to US$26 million, following an US$11 million series A last November.

“Lucy reflects the evolution of our products from robot vacuums to AI IoT-enabled home robots that can assist with a wide range of features that help people with their life and work,” said founder and CEO Zhe Zhang, who added that the fresh capital will bolster Trifo’s hardware and software development, as well as its expansion to European and U.S. markets.

Vecna Robotics, the workflow orchestration and self-driving forklift provider, has raised US$50 million in Series B funding. With double-digit annual growth forecast for the mobile robot market over the next five years, the new capital will expand Vecna Robotics’ industry-leading footprint and accelerate the development of new product offerings.

This round is led by Blackhorn Ventures, with participation from new investors Highland Capital and Fontinalis Partners, and additional funding from existing investors Drive Capital and Tectonic Ventures.

Trevor Zimmerman of Blackhorn Ventures, says: “Vecna Robotics’ focus on the Pivotal platform and innovative AMRs to create unprecedented resource productivity for industrial applications is strongly aligned with our investment strategy. We are excited to be a part of their growth.”

Virtual Incision Corporation, a medical device company pioneering a first-of-its-kind miniaturized surgical robot, announced it has raised US$20 million in a Series B+ financing led by returning investor Bluestem Capital, with participation from returning investor PrairieGold Venture Partners, as well as from Genesis Innovation Group and other affiliated investors. The funds will support regulatory and clinical programs leading to the commercialization of the company’s MIRA™ (“miniaturized in vivo robotic assistant”) Surgical Robotic Platform.

“We designed the MIRA Surgical Robotic Platform with the fundamental understanding that minimally invasive procedures offer tremendous benefits to patients. We believe our portable and affordable abdominal robot has the potential to bring these benefits to many more patients,” said John Murphy, president and CEO of Virtual Incision. “The planned IDE clinical study of MIRA is the critical next step for the company.”

Naio Technologies SAS closed a €14 million (US$15.53 million) Series A funding round. The French agricultural robotics company has been developing field robots for weeding. They are intended to reduce physical strain on farmers and reduce reliance on chemical herbicides, which can harm the environment.

Bpifrance led the Series A round, with participation from impact investor Pymwymic and historical shareholders Demeter and Capagro. Naio Technologies said the new investment will help it “further capitalize on its position as a leader in agricultural robotics and reach the next level of technology maturity in order to prepare the robots for mass production.”

The promise of contributing to more sustainable agricultural practices, combined with the company’s ability to demonstrate market readiness over the past 18 months, contributed to the successful closing of the funding round, claimed Naio.

Robotics startup company Soft Robotics has closed its Series B round of funding, raising US$23 million led by Calibrate Ventures and Material Impact, and including participation from exiting investors including Honeywell, Yahama, Hyperplane and more. This round also brings in FANUC, the world’s largest maker of industrial robots and a recently announced strategic partner for Soft Robotics.

The company said in a press release that the round was oversubscribed, which suggests it isn’t looking to glut itself on capital investors, given that this US$23 million follows a similarly sized US$20 million round that closed in 2018 which it also referred to as “oversubscribed.” Prior to that, Soft Robotics had raised US$5 million in a Series A round closed in 2015.

This round will specifically help Soft Robotics spend on growth, looking to increase its variability even further and work on expanding its food packaging and consumer goods applications, as well as diving into e-commerce and logistics – specifically to help automate and improve the returns process, a costly and ever-growing challenge as more retail moves online.

Robotics and artificial intelligence company Berkshire Grey has raised US$263 million in Series B financing to continue providing global Fortune 100 companies with retail, eCommerce and logistics fulfillment automation. SoftBank, Khosla Ventures, New Enterprise Associates and Canaan all participated in this financing round, Berkshire Grey said in a press release. The funds will empower Berkshire Grey’s worldwide growth, acquisitions, and internal team expansion. The company seeks to enhance its growing reputation as a global provider for AI and robotics solutions.

“Our customers from leading enterprises in retail, eCommerce, and logistics are selecting Berkshire Grey as a competitive differentiator,” said Tom Wagner, founder and CEO of Berkshire Grey in a statement. “With our intelligent robotic automation, our clients see faster and more efficient supply chain operations that enable them to address the wants of today’s savvy consumer.”

ZAP Surgical Systems, Inc., a medical technology company developing a next-generation radiosurgical robot for non-invasive tumor ablation, announced the completion of an equity financing round that raised an aggregate total of US$81 million. The round was led by Primavera Capital Group, with participation from GT Healthcare Capital Partners, Chow Tai Fook Enterprises, ShangBay Capital, and Hogy Medical, who joined existing investors Foxconn Technology Group and Varian Medical Systems. The company has now raised more than US$160 million in financing capital to date. Funds from the latest financing round will be used to accelerate the commercialization of the Company’s FDA cleared ZAP-X® surgical robot for the treatment of cancer and other brain disorders.

“Although over the past 3-decades stereotactic radiosurgery has become a well-established non-invasive tool for treating a broad array of human pathologies, globally more than 2 million people who suffer from brain, head & neck cancer annually go untreated,” said John R. Adler, MD, Stanford Professor of Neurosurgery and founder & CEO of ZAP Surgical Systems. “ZAP Surgical welcomes this group of world-class investors in our now common quest to transform the lives, and very often cure, millions of patients each year by means of the ZAP-X surgical robot.”

Clobotics Corp. has received a US$10 million investment from Tiger Management Fund for its Pre-B+ series round. The total amount raised to date by the company is US$53 million. Clobotics will use the funding to further support the development of its AI-enabled Smart Wind and Smart Retail solutions. It also plans to accelerate the mass-deployment of its solutions in the global marketplace.

“Clobotics has spent the past three years using tightly-integrated hardware and software to provide AI services for retail and wind energy industries,” stated Founder and CEO George Yan. “With the new funding, we’re now ready to blitz-scale the service to customers across the globe.”

China’s STEM Education Service Provider “DFRobot” rasied Tens of Millions of Yuan in a Series B round funding led by Cash Capital. Genesis Capital was as the sole financial adviser. This investment will mainly be used for ChuangKe Education.

Speaking on where the funds will be utilised, Manish Das, Co-founder of Skilancer Solar, said, “This investment will allow Skilancer Solar to make upgrades to its design and technology platform, geographical expansion, team building, and to develop a competitive edge in the market.”

The solar cleantech sector in India is still at a nascent stage as compared to its western counterparts, Apoorv Ranjan Sharma, Founder – Venture Catalysts said, adding that this funding will help Skilancer Solar realise its ambition of becoming a renowned brand and the go-to name in the cleantech sector through its technology and innovation-based solutions.