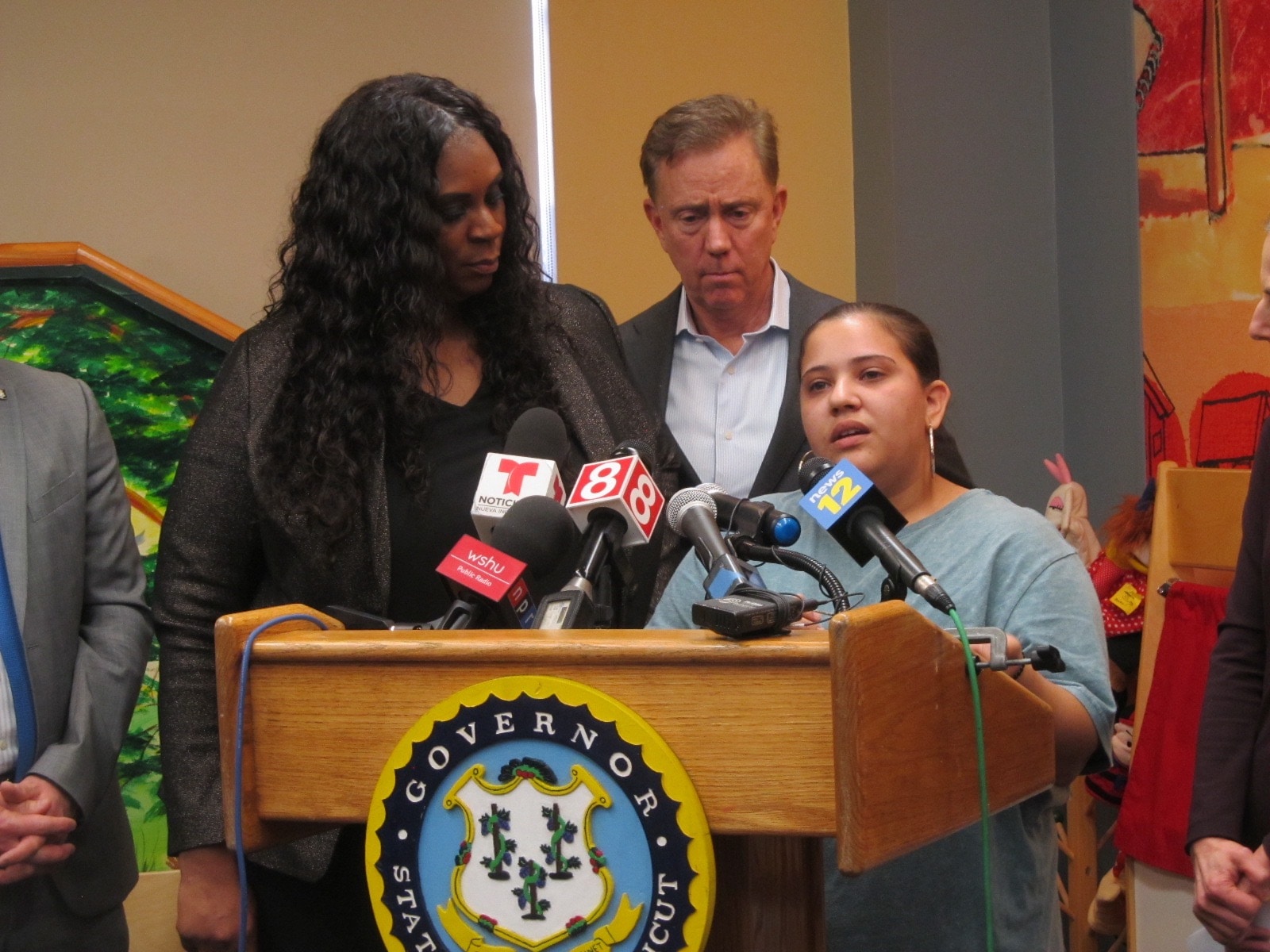 Jessica Soba, right, shares her story about the benefits cliff she faced. Standing next to her are Gov. Ned Lamont and Monte Ferguson, the executive director of the child care program Soba’s daughter attends.

Bridgeport – Jessica Soba is terrified she is going to lose the state voucher that picks up a share of day care costs for her 3-year-old daughter.

Even with the Care4Kids subsidy, Soba is still barely able to afford rent, health care and food. A single mom who works full-time as an administrative assistance at a manufacturing company, Soba is approaching the income cutoff to qualify for government help with day care.

State leaders on Monday rallied around her at a day care in Bridgeport to announce they have implemented a partial solution: increase how much income families receiving child care subsidies can earn before losing the benefit. And as families earn more, their share of covering the day care payments will also increase.

The shift – first announced four months ago – means parents can earn up to 65% of the area’s average income and not lose the subsidy, compared to the earlier 50% threshold. For Soba, that means she can make up to $52,242 instead of $39,417. The extension is expected to impact about 300 families a year, state estimates show.

“What we are trying to do here at the state level is trying to expand access, make it possible for more families, and make sure, Jessica, as your [pay goes] up and keep working, that you are not disqualified,” Gov. Ned Lamont told the mom. “We need everybody being able to work.” 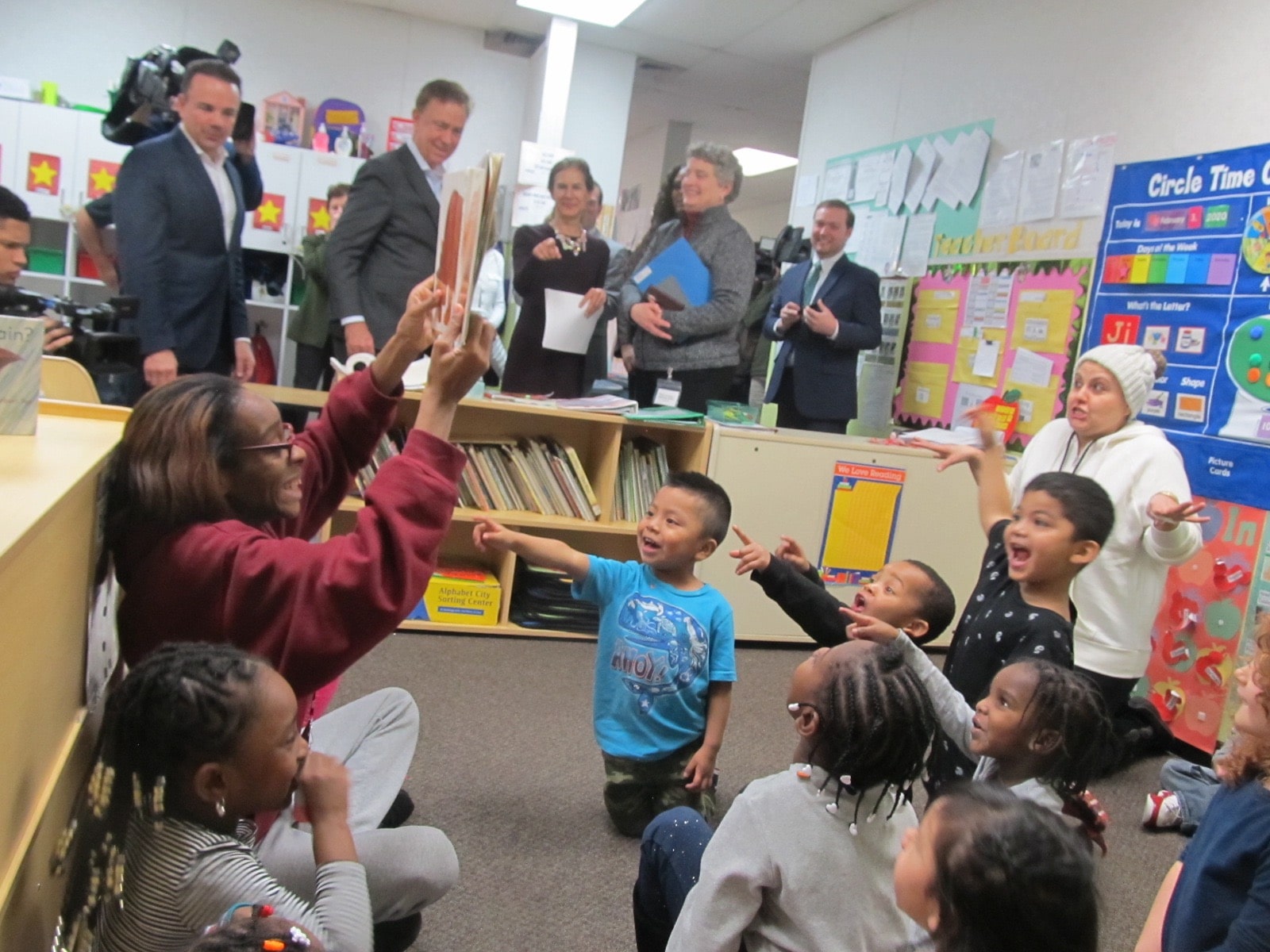 The governor’s announcement comes two days before he is set to release his second budget proposal.

But it was increased federal — and not state — funding that made it possible to address this benefits cliff. In return for that increased funding, the federal government required states to provide a smaller subsidy for voucher recipients when their pay increases.

Asked what his plans are for state funding to expand access to child care or preschool programs, the governor said he does not intend to propose increased state aid.

“Right now we are leveraging every federal dime we can,” Lamont said. “There are a number of people, some of who can’t even afford to go to work, unless we can find more affordable spots, especially for the earliest ages. So we are going to keep working on that, starting with the federal dollars.”

The governor said he cannot afford to increase state spending on Care4Kids or other early education programs because he is constrained by the spending cap. There is a legal process to extend that cap with a 60% vote of the legislature, and past governors have also found ways to maneuver around it.

The number of children receiving these childcare subsidies has declined significantly in recent years – from 19,571 in December 2015 to 16,948 last December. This 13% decline followed several federal rule changes that allowed families to keep their subsidies for a number of months if they lost their jobs or their income increased.

Beth Bye, the state’s commissioner of the Office of Early Childhood, said the state and federal government have already provided the funding to boost the number of families receiving help paying for day care back to historic levels and her agency is working on getting more families enrolled.

When it comes to providing children access to high-quality programs, Connecticut comes in 21st place for 4-year-olds in preschool and 10th place for 3-year-olds, according to the annual rankings by Rutgers Graduate School for Education National Institute for Early Education Research.

Entries for the Research Got Talent Awards are open

Hundreds give input on Duluth school district’s next superintendent

Hundreds give input on Duluth school district's next superintendent