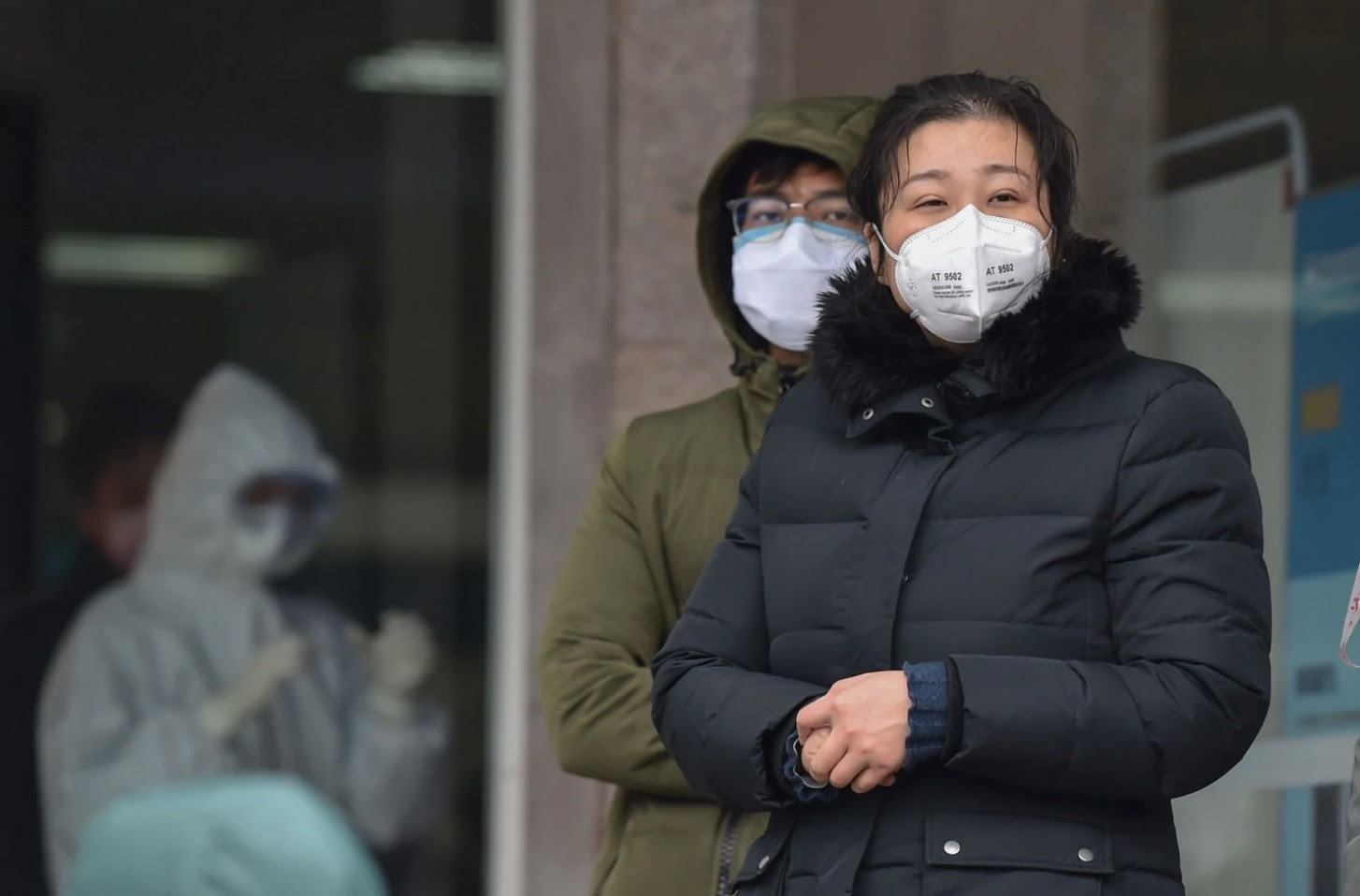 Iran, Boeing, impeachment and now a virus out of China all challenging investor sentiment less than a month into the new year. The latest news coming from China is reminiscent of Stephen King’s masterpiece, The Stand, which described a dystopian world nearly wiped out by a super flu.

At first details on the escalating health crisis were difficult to come by given China’s opaque governing structure. However, over the weekend President Xi established what the Wall Street Journal describes as a high-level party committee to take control of the government’s response to the coronavirus. The virus has now killed 80 with at least 2,700 infected — a number that is likely to climb.

Maybe more telling is the complete about-face of Chinese authorities. The initial response was to keep the outbreak as quiet as possible, but today information seems to be readily available. Hoping to calm fears both inside and outside the country, government officials are working quickly to help contain the disease announcing restrictions on movement and forcing travel agencies to stop selling air tickets and hotel services for travel within China. Additionally, China has now extended the Lunar New Year Holiday and restricted travel on up to 40 Million people.

The center and possible origin of the epidemic appears to be Wuhan, a major industrial city in the Hubei Province. Fanning the flames of fear is the fact that the virus has now spread outside China with cases reported in other countries including at least five cases inside the United States.

I’ll leave it to your favorite media news outlet for the latest breaking news and what’s being done to hopefully eradicate this deadly disease, but for now let’s see how far the infection has spread in world markets.

Investors like certainty and I can’t think of anything more uncertain than a deadly virus. If history is any guide, market reactions are likely to be swift but ultimately contained. For China, the epicenter of the disease, the people are obviously are more exposed. That exposure is already being echoed in commodity markets and local shares. The U.S. retreat on Friday was probably a knee jerk reaction as well. Hardest hit are the usual suspects. Airlines and cruise companies were all for sale Friday with stocks like United Airlines (UAL), Royal Caribbean (RCL) and Carnival (CCL) leading the way lower.

Reversion to the mean is a powerful force that relieves both overbought and oversold conditions. The 3-year chart of the S&P 500 below shows a linear regression for the time period. Before the first news of the coronavirus outbreak, the S&P was sitting close to 7% above the linear regression line. We could easily test those levels in the days ahead. 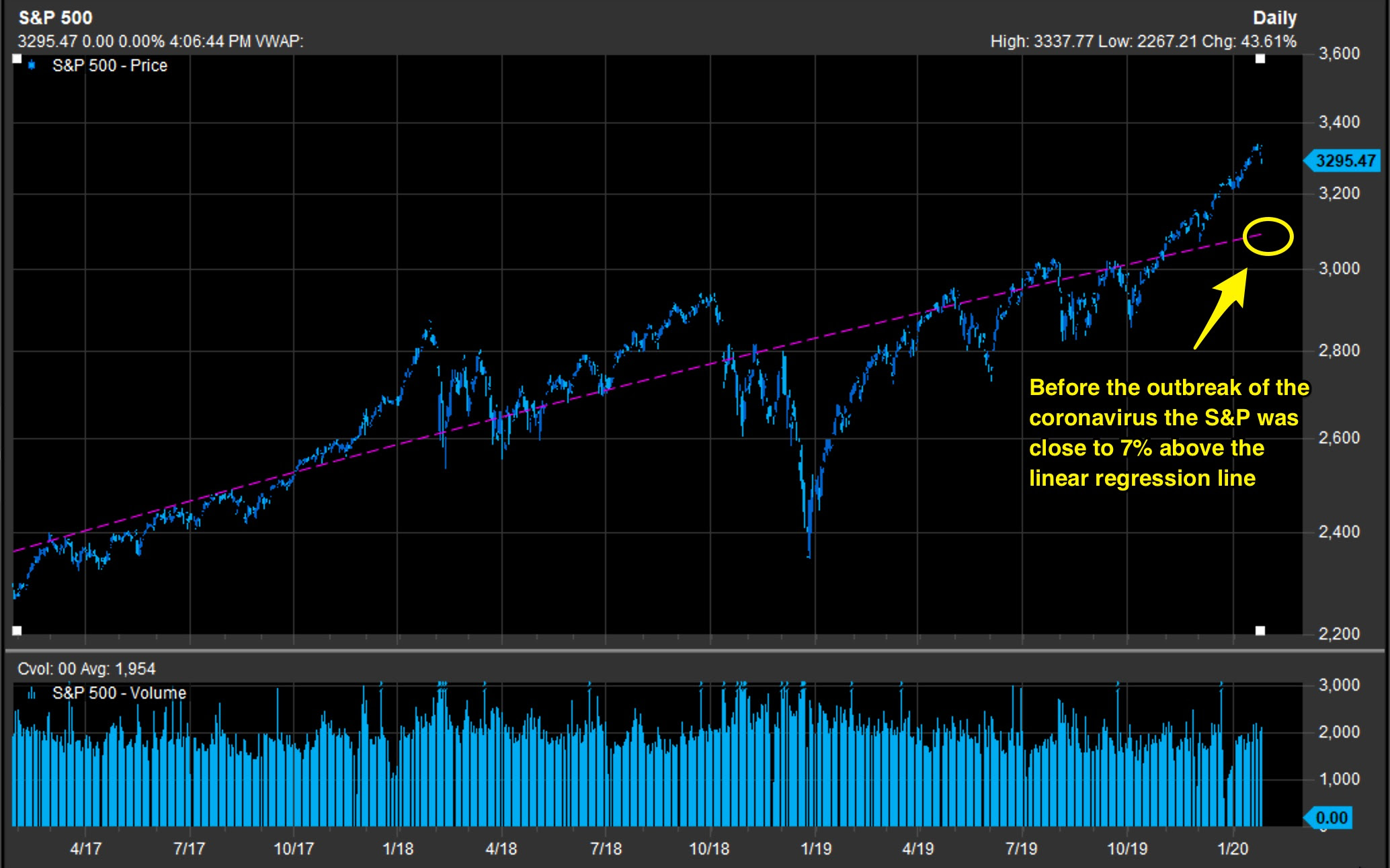 Many will point to the SARS epidemic in 2003 to get a sense of what the damage may be. Comparisons will be difficult given that the 2003 outbreak was on the heels of a vicious recession. Goldman has done some excellent work in this area and I would point to some recent research by Andrew Tilton.

China’s transportation infrastructure has improved dramatically since the SARS breakout in 2003. While a positive for the economy, it also enhances the ability of the virus to spread rapidly, as it did with this coronavirus in the early weeks before the government stepped in to curtail travel. In 2003, the SARS virus infected 8,000 with a fatality rate of about 11%. Again, if history is any guide, retail sales, industrial production and of course travel related industries will come under pressure. From March to June of 2003, retail sales growth in China declined from 8% growth to 4%, and, in Hong Kong, PMI data fell off a cliff during the same time frame.

If this is what’s likely in the country of origin, what does it mean for the United States and other world markets? The answer of course is dependent on how quickly the coronavirus can be contained and how many cases reach our shores. Even if there weren’t any cases in the US, given a global economy, few industries will be able to go completely untouched. Today, forty percent of S&P 500 revenue resides offshore. Add the fact that China is the world’s second largest economy and a major trading partner, and we’re going to feel it. The only question is how much.

We’re deep into the earnings season with some of the biggest and most influential companies expected to report this week. On Tuesday Apple (AAPL)* and on Wednesday Boeing (BA), McDonald’s (MCD) and Microsoft (MSFT) are just a few of the reports on deck. As long as the coronavirus is in the news cycle, expect a tug of war for investor attention. There are few absolutes in life, but one constant for markets is the expectation that human emotion will force markets to overshoot in both directions. In the days and weeks ahead, expect that theory will be put to the test.

*At the time of this article some funds managed by David Nelson were long MSFT and AAPL.


DISCLOSURE:
The views and opinions expressed in this article are those of the authors, and do not represent the views of equities.com. Readers should not consider statements made by the author as formal recommendations and should consult their financial advisor before making any investment decisions. To read our full disclosure, please go to: http://www.equities.com/disclaimer. The author of this article, or a firm that employs the author, is a holder of the following securities mentioned in this article : MSFT, AAPL