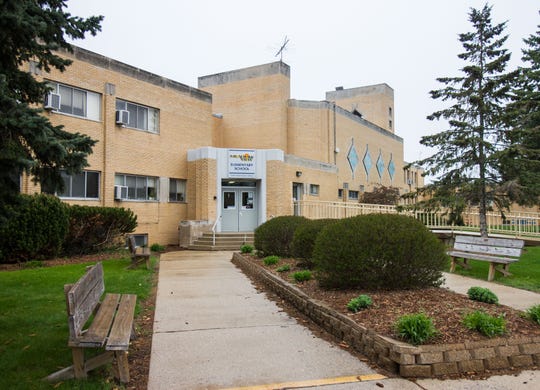 The Oconomowoc Area School Board is trying to determine what to do with the former Meadow View Elementary School and surrounding property. (Photo: Scott Ash / Now News Group)

The new Meadow View Elementary School off Brown Street in Oconomowoc has been up and running since fall, built with money approved in a November 2016 referendum.

But what will become of the school it replaced and the property it sits on remains up in the air.

Here are several things to know about the discussions.

Newsletter said the district would sell

A district newsletter sent to residents before the 2016 referendum said, if the referendum were approved, the district would sell the existing Meadow View building and land while working with the town of Oconomowoc to ensure the necessary zoning changes, as needed.

Proceeds from the sale of the old school “may be used to address additional capital needs, or further fund the long-term capital maintenance fund (Fund 46), established by the district in 2015,” the newsletter said.

But even as the newsletter said the district intended to sell, there were differing ideas among current board members about what should be done with the building and property.

Some want to sell

School board member Sandy Schick, who is not seeking re-election in April, said she wants to see the district keep the promise made as part of the referendum in selling the property and the building.

Board member James Wood agreed with Schick on similar grounds.

“If they do not do what they say they were going to do, a lack of trust forms and future initiatives will be questioned, with cause,” Wood said.

Board President Jessica Karnowski concurred, citing personal conversations with people in the community, as well as a 2018 survey that showed 56.2% of respondents wanted to sell both the building and the property.

Karnowski said it would cost an estimated $12.4 million to maintain the old Meadow View Elementary School building, which she said doesn’t include any renovation costs.

“We do not have unlimited funds in our budget, and we need to be conservative, responsible and precise with our spending,” she said. “We just passed a new teacher compensation model and need to make sure that we have the available funds to do what we promised when we passed it.”

Karnowski said the board also just approved one of the most aggressive school district strategic plans in the state and needs to allocate every financial resource possible to move the district’s students and staff forward in their education and training.

Recently, Karnowski said, the board received an email from the district’s curriculum director stating the district was not interested in using the old Meadow View Elementary School building because there is nothing that couldn’t be done at one of the other district buildings.

However, Karnowski said district teachers and administrators have said the property’s pond, prairie and wetlands provide potential learning opportunities for students. She said it would cost nothing to keep the land because of low maintenance costs; the property does not share the same budgetary burden as the building, she said.

“I would be a proponent for keeping the land. However, with all the data we already have, it would be irresponsible of me to vote to keep the building,” Karnowski said.

Others want to keep the building and land

Board member Dan Raasch — who is running for re-election in the Feb. 18 primary — said the board has a responsibility to make a thoughtful, fact-based and long-range decision. He added that the board has not explored all of the possibilities.

“We need to work with district municipalities, the community and think 10, 20 and 30 years down the road and be mindful of our future,” Raasch said. “We also have a responsibility to have some understanding of the land surrounding any property the district owns, how it is zoned, if municipalities are considering zoning or development initiatives.”

Board members Juliet Steitzer and Kim Herro also want to explore other options.

Steitzer said the schools belong to the community and that the board has the responsibility to ensure the proper administration of district resources. She also said that successful school boards statewide engage their communities in conversation when making these kinds of decisions.

“That is what OASD should begin and carry out with fidelity. We are not working against a deadline; the best community decision will come from taking time to hear from the community itself,” Steitzer said.

Herro said she’d like to see the building and property be used for environmental education. She said the numbers for renovating the school need to be gone through “with a fine-tooth comb,” and also said that there should be more community involvement.

“If you had a community input where you invited your community to come and do focus groups … You do a focus group and you go, ‘What is important for you and your student?’ The beautiful thing is you could bring the students along because they are the end customer,” Herro said.

Noting that he has been on the board since June 2018 and wasn’t part of the 2016 referendum discussions, board member Scott Roehl said he is looking for more information.

Roehl said that at December and January meetings, he asked the administration to discuss curricular impacts and potential educational opportunities for the property.

“My candidacy for the board was always focused on doing what’s best for all of the kids in the OASD. I want to be both fiscally responsible while providing an educational experience that is top-notch for all kids. At this point in time, I do not know if the educational and curricular benefits will outweigh the financial challenges of keeping the building,” Roehl said.

Other options for environmental ed

According to Karnowski, the district’s administration and staff have started to investigate the possibility of bringing additional environmental education to students.

The district owns 50 acres behind Nature Hill Intermediate School. Also near the school is Rosenow Creek and the 76-acre School Farm. The district also has access to Mud Lake, which is 28 acres, Karnowski said.

The appraisal process for the property is underway, according to minutes from a Dec. 11 school board workshop. The first review is expected to take place in February, with board approval potentially following in March, the minutes said.

Our subscribers make this reporting possible. Please consider supporting local journalism by subscribing to the Journal Sentinel at jsonline.com/deal.