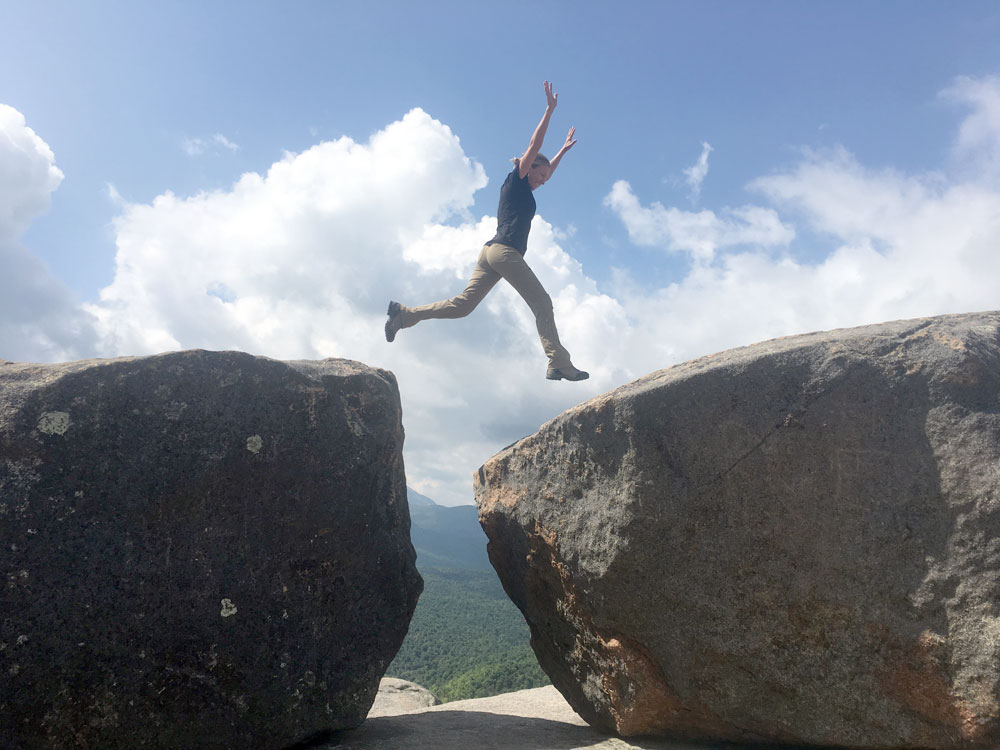 Emily Lyons of New York City jumps from one of the Balanced Rocks to the other on Pitchoff Mountain, in the Sentinel Range Wilderness Area between Lake Placid and Keene.
(Enterprise photo — Antonio Olivero)

RAY BROOK — In its now-finished unit management plan for the Sentinel Range Wilderness, the state Department of Environmental Conservation says it plans to mitigate erosion and other damage, reroute and add ski trails, limit camping group sizes and rearrange campsites.

The Sentinel Range Wilderness is comprised of 23,874 acres of Adirondack Forest Preserve state land in the Essex County towns of Keene, Jay, Wilmington and North Elba.

There are camping changes in the UMP as well, including plans to restrict camping group sizes to eight people and day-use groups to 15 people, closing two campsites on Copperas Pond for restoration into one new campsite, closing the campsite at Holcomb Pond and building two non-vehicle-accessible campsites off Bartlett Road.

There are plans to manage rock climbing sites and minimize environmental impacts by stabilizing soil at the top and base of climbing routes where erosion is a problem. Also, the DEC plans to formalize access trails to the Barkeater Cliffs, Notch Mountain and Pitchoff Chimney Cliff, and maintain adequate parking for climbers.

The UMP proposes a focus group — including DEC staff, members of the climbing community and environmental organizations — to develop a park-wide policy on the management of fixed climbing anchors on Forest Preserve lands.

The trail to Copperas Pond will be rerouted. Most of the current trail is heavily eroded and is too steep to be maintained for sustainable use, the DEC says.

The UMP also maintains a large trail-less area. The core of the wilderness, about 10,500 acres, will remain undeveloped and managed as an area without formal trails. Herd paths in the area may remain, provided the use of the paths do not result in significant damage to the natural resources.


WILMINGTON — The driver of a vehicle found in the West Branch of the AuSable River Wednesday has been located, …