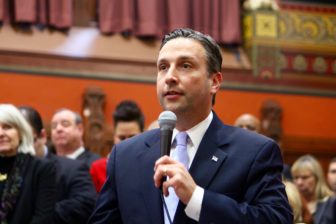 Senate Democrats pledged Friday to replenish $2.1 million in federal funds the Trump administration has stripped from Planned Parenthood clinics in the region.

But it remains to be seen whether the lawmakers will be able to maneuver around a state spending cap that will continue to clamp down on spending in the coming year.

Democrats, who control 22 out of 36 seats in the Senate, also continued to unveil a 2020 agenda Friday that includes initiatives to prevent youth suicides and age discrimination, expand access to diaper changing stations, and bar “captive audience” meetings and non-disclosure agreements that silence victims of sexual harassment.

“There’s been an assault on health care coming out of Washington, D.C. over the last three-and-a half years at the White House and it’s been a direct assault on women’s health care,” said Senate Majority Leader Bob Duff, D-Norwalk.

The federal Title X Family Planning Program, enacted in 1970, is the only federal grant dedicated exclusively to subsidizing comprehensive family planning and related health services. Planned Parenthood lost funding after refusing to abide by a change in the Title X program implemented by the Trump administration — one that bars clinics from telling patients how and where to access abortion services.

Planned Parenthood of Southern New England, which operates 16 health centers across Connecticut, has lost an estimated $2.1 million in annual federal funding, according to the Senate Democratic Caucus. Duff said the goal is to replace those lost dollars with state funds in the coming fiscal year.

But there is a budgetary obstacle which could prove difficult.

Democratic and Republican state lawmakers agreed on a more rigid spending cap to help end a nearly year-long budget battle in November 2017. The preliminary $22.1 billion budget Gov. Ned Lamont and legislators agreed upon last May for the 2020-21 fiscal year falls a mere $5 million under that cap.

And the recommendation for Planned Parenthood is not the only proposal to add to that budget. Lawmakers, who typically recommend tens of millions of dollars in spending adjustments to the budget, already are talking about reversing a $5.3 million cut to nursing homes next fiscal year.

This raises the question of whether Senate Democrats are looking to legally exceed the spending cap, which is possible but very complex, requiring support from both Gov. Ned Lamont and Republican lawmakers — all of whom have been reluctant to take that step.

Or would the caucus favor cutting other programs to free up funds for new initiatives like Planned Parenthood?

“We have lots of priorities, obviously, and we’re going to have to work through them during the session,” Duff said. But he added that “We wouldn’t announce this today if it wasn’t something we were serious about.”

Other proposals on the Senate Democratic agenda unveiled Friday include: