Funding and mergers and acquisitions (M&A) activity was down in the Battery Storage, Smart Grid, and Energy Efficiency sectors in 2019 compared to 2018, according to a new report from Mercom Capital Group.

Total corporate funding (including venture capital funding, public market, and debt financing) for the Battery Storage, Smart Grid, and Energy Efficiency sectors in 2019 was down by 22% with $3.8 billion compared to $4.9 billion in 2018. 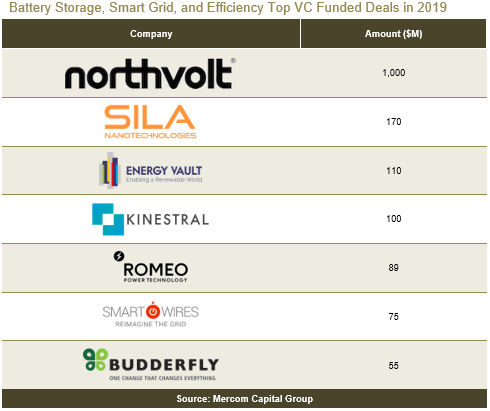 Seventy-eight VC investors participated in Battery Storage deals in 2019 compared to 73 in 2018. BASF Venture Capital, Breakthrough Energy Ventures, and Macquarie Capital were the top investors in 2019. Utilities and oil and gas companies were involved in seven battery storage funding deals in 2019.

In 2019, announced debt and public market financing for Battery Storage companies increased to $1.1 billion in 10 deals compared to $494 million in 12 deals in 2018. Northvolt’s $393 million loan was the largest debt financing deal in 2019.

The most prominent M&A transaction in the battery storage space was the acquisition of Sonnen by oil major, Shell, early on in the year. 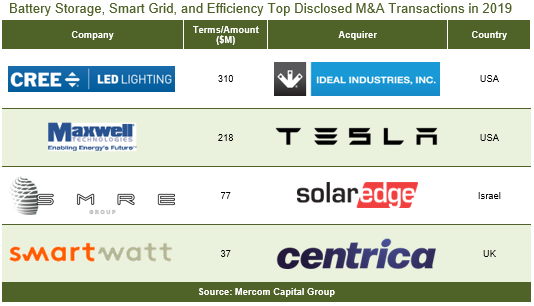 The top VC funded companies in 2019 were Smart Wires, which brought in $75 million, eSmart Systems, which received $34 million, SmartRent, which secured $32 million, CleanSpark with $20 million, and Volta Charging with $20 million.

Seventy-eight investors funded Smart Grid companies in 2019, compared to 69 in 2018. The top VC investor in 2019 was Shell, which was involved in four funding deals followed by Energy Impact Partners with three deals. Other prominent investors included Total and Centrica with two deals each.

In 2019, three debt and public market financing deals totaling $72 million were announced compared to $1.3 billion in four deals in 2018. There were no IPOs announced for Smart Grid companies in 2019.

Announced debt and public market financing activity in the first nine months of 2019 ($56 million in two deals) was 74% lower compared to 9M 2018 when $212 million went into two deals.

Get a copy of the report here.

Parents, teachers share opinions for and against a later start for SLC high schools

Parents, teachers share opinions for and against a later start for SLC high schools