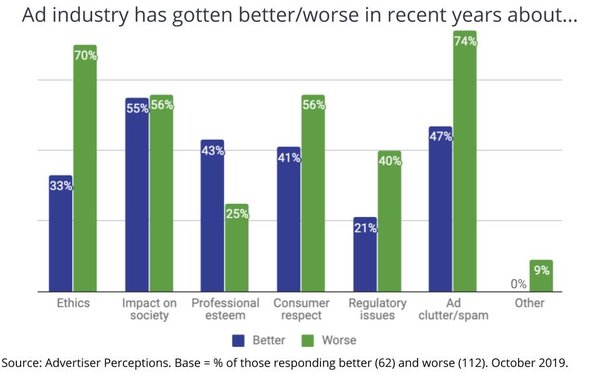 Ad industry executives — both advertisers and agency media executives — overwhelmingly feel their professional esteem has improved in recent years, but they give decidedly mixed grades to
the industry’s practices, especially with regard to ethics, regulatory issues, advertising clutter, and consumer respect.

Even so, the industry is generally split on its overall impact on
society.

Those are the top line findings of interviews conducted by Advertiser Perceptions for Research
Intelligencer late last year as part of a benchmark on the industry’s state coming into 2020.

Detailed breaks, including respondent-level data on advertisers vs. agencies, and
complete tabulations, are available exclusively to subscribers of Research Intelligencer, but the top lines
indicate that advertising professionals are decidedly mixed on key issues driving the industry’s regard for itself.

The percentages above reflect the share of ad executives responding that
each issue has either gotten better or worse, so do not add up to 100%.

The bottom line is is that the greatest disparities exist among those who see professional ethics and ad clutter
improving versus those who believe it is getting worse.

The findings are interesting given that consumer perception of the ad industry appears to be eroding from several recent years of
improvement. A Research Intelligencer analysis of 18 years of
available data from Gallup’s annual U.S. industry rankings report shows the net positive/negative score once again fell into negative depths in 2019, following six years of positivity. 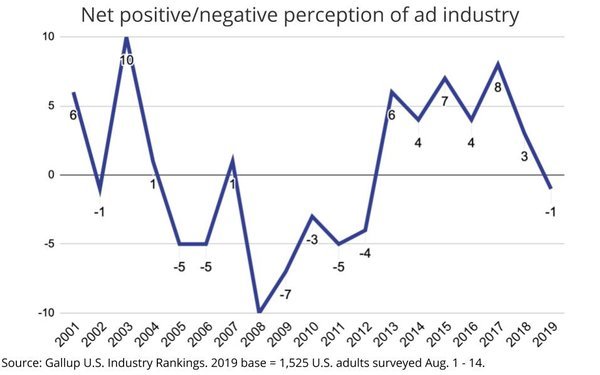