Gold Gives Up The Bulk Of Its Geopolitical Fueled Gains. What’s Next?

Well, dear readers, again it has happened. Or, for those vacuum-bound wherein life is but ‘s net week-to-week closing price, nothing has happened, given it having settled Friday at 1563 to eke out a wee weekly gain of just eight li’l ole points.

Greetings from Monaco wherein, too, a lot can happen without one realizing anything has happened, such as Saturday’s sun having already risen from the sea. Thus with time at a premium (when is it not?) let’s dive into this brief installment of The Gold Update.

The price of Gold hasn’t fooled its watchers a bit. Indeed it has just done what we’ve herein anticipated ‘twould do over these last two weeks of geopolitical drama: price went way up … and then it went (per a favored quip) “back from whence it came”. Geopolitically from an ostensibly pro-active event to one of retaliation, all-in-all waning into de-escalation, Gold’s price rocket-shot from the prior week’s low of 1514 up to this past week’s high of 1613, a 99-point, +6.5% excursion so sufficiently swift that with respect to our forecast high price for this year of 1675, we found ourselves exclaiming, “Wait a sec will ya, the year’s barely started out there!” But then as is its won’t, Gold yet again routinely rewound itself in giving back the bulk of the geopolitical gains as we below see per the rightmost weekly bar in this view of price from a year ago-to-date, the new parabolic blue-dotted Long trend increasing its gait: 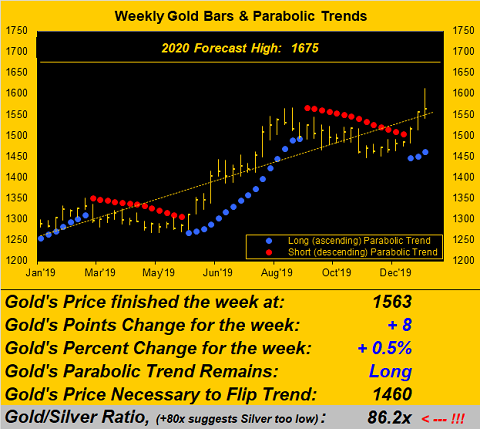 Still on occasion during our Sunday Investors Roundtables, ’twill be put forth that “Gold needs some big event to make it go up.” Our stock response is rooted in that which just occurred: geopolitical events but temporarily bump price. ‘Course, the real “big event”, indeed the one which is so large and moreover ongoing such that we “can’t see the forest for the trees” is that which is presented in the Gold Scoreboard at the top of these weekly pieces: currency debasement. By which, as has just recently turned the case, we’ve pegged Gold today at a corresponding value in excess of $3,000/oz. Or to put it succinctly, geopolitics are for the Gold trader; currency debasings are for the Gold investor.

Quickly zooming along, the mainstream investing choice seemingly as ever continues to be in the stock market, which we measure by the . Our “live” honestly-calculated price/earnings ratio for the S&P 500 today is 40.1x, the heights for which few adjectives remain to describe. We see that Bob Shiller’s “CAPE” version is 31.1x, a level that on his scale has preceded major market fallouts. Tick…Tick…Tick… Recall we’re sensing that into the StateState elections this coming November, one ought be out of equities, if not outright short the S&P, regardless of the voting results.

All that said, still ticking up nicely is the Economic Barometer. This past week’s reports included a ramping up in the provided for December by the along with a marked increase in per the data from Automatic Data Processing (albeit vs. a slowing in growth as recorded by the Department of Labor Statistics). Nonetheless, November’s shrank and were worked off, all contributing to the climbing state of the Baro: 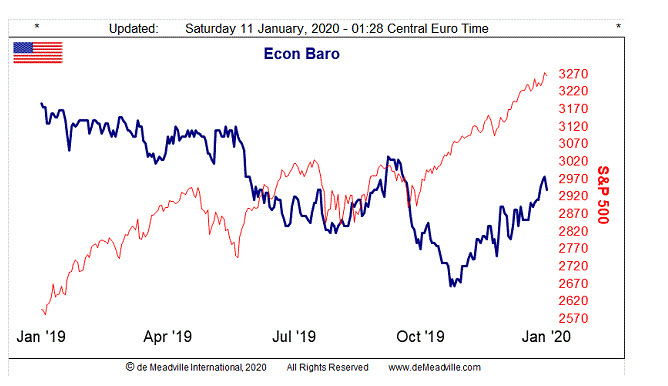 ‘Twould thus seem per the above picture that the Federal Open Market Committee’s sway to leave further interest rate changes at bay is (for now) the way to play. Globally, however, the World Bank as noted in its just-released Global Economic Prospects report is giving a slight trim to their economic expansion expectations. Either way, specific to Gold: as the “faux dough” continues to be made, the yellow metal ought remain an upside trade.

To that end, let’s quickly go to Gold’s daily bars from the last three months-to-date on the left and the 10-day Market Profile on the right. Mind Gold’s baby blue dots of linear regression trend consistency for weakness, which would then, in turn, suggest lower price levels near-term: 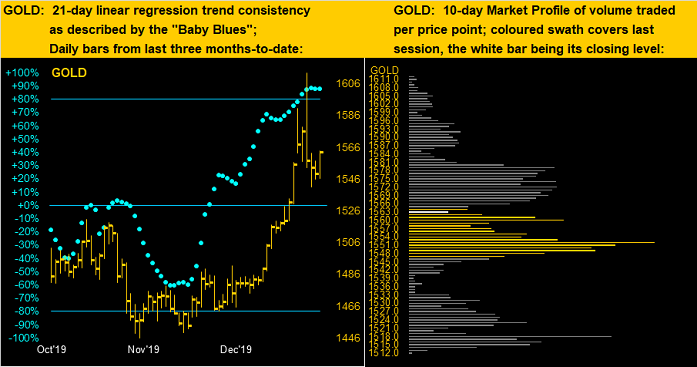 And here is the same presentation for Sister : 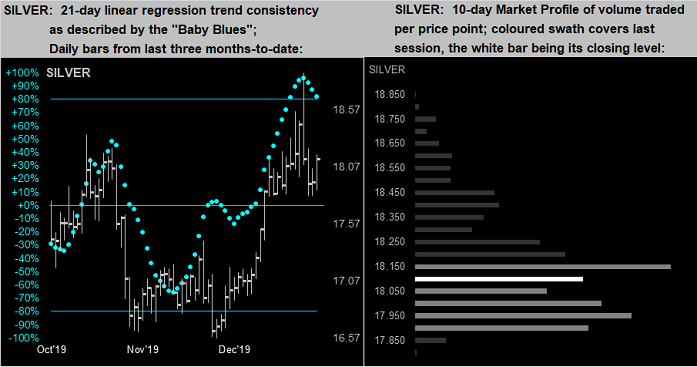 ‘Tis a busy calendar next week for the Economic Barometer. As well we get the Federal Reserve Bank’s on regional economic conditions; and Phase One of the U.S./China trade deals set to be inked in Washington. Again, pardon our brevity this time ’round as things are, shall we say “afoot” here in the Principality. Fortunately, as the sun rises from the Mediterranean, so we look to Gold rising as well — near-term turbulence notwithstanding — as the year doth propel!