But ATSC 3.0, a voluntary standard for broadcasters and manufacturers, still has a long way to go before a wide range of services that utilize the new standard become a mass market consumer phenomenon.


“I would say we’re at the end of the beginning,” Sam Matheny, EVP and CTO of the National Association of Broadcasters (NAB), said here at CES 2020 during a panel dedicated to NextGen TV/ATSC 3.0.


Here at CES, LG Electronics, Samsung and Sony were part of the trio announcing a total of 20 TVs/receivers that will support the new standard, with most of those products to be large-screen, premium-level products.


Initial ATSC 3.0-based services will focus on improved over-the-air images for TVs in 4K format. But the standard, which brings IP, OTT-like capabilities to the broadcast TV world, will also support other features such as enhanced audio and interactivity, as well as set the stage for those services to reach a wide range of devices, including smartphones, tablets, PCs, set-top boxes and game consoles. Future ATSC 3.0 dongles will also play a role in enabling those signals to reach devices that don’t sport integrated ATSC 3.0 tuners. 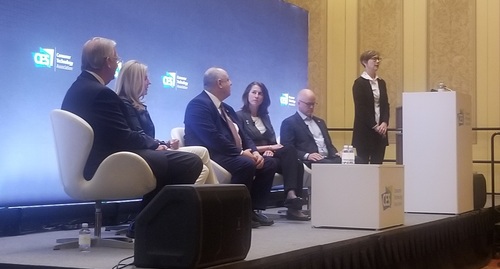 “Truly, it is state-of-the-art,” Madeleine Noland, president of the Advanced Television Systems Committee, said. She noted that ATSC 3.0 was able to use several existing or recently developed technologies such as OFDM modulation (for both fixed and mobile) and advanced, bandwidth-efficient codecs.


Noland said ATSC 3.0’s hybrid OTT/over-the-air capabilities can also enable other types of services, including “content substitution.” By way of example, if a baseball game delivered on the primary TV broadcast goes into extra innings and pre-empts the following show on the TV schedule, it’s possible that the viewer could opt to receive that show in an OTT manner.


NextGen TV services won’t be backwards-compatible with today’s ATSC 1.0 services and there’s no government mandate driving the transition to 3.0 as there was with the broadcast TV shift from analog to digital. That voluntary aspect is one reason why ATSC 3.0 is packed with so many features and new capabilities. That helped drive a multitude of features into the standard that could help entice adoption by the broadcast TV ecosystem. “It had better be good,” Noland said.

This logo/brand will tell consumers if their TV (or some other type of device) can receive ATSC 3.0 signals.


Consumer research shows that the vast majority like these 3.0-based services and are interested in buying TVs that will carry the NextGen TV logo, Anne Schelle, Pearl TV’s managing director, said. She noted that the consumers there particularly like a “voice boost” capability that helps to distinguish the audio of a person speaking from the background noise.

Cleveland, Ohio, is another test bed for ATSC 3.0. After focusing on PHY-layer tests, the market is now starting to try out other more advanced capabilities, including interactive services and application performance, NAB’s Matheny said.

Although TV sets are the initial focus of these ATSC 3.0 services, a big question is when or if smartphone makers and other platforms will integrate tuners to receive those signals.

Schelle said dongles, gateways and set-tops are among the device types likely to integrate ATSC 3.0 capabilities. She added that car makers are likewise interested in the new standard to help them deliver “infotainment” services and large files to connected vehicles in a highly secure and authenticated manner. “There’s a lot of opportunity there,” she said.

But Schelle also acknowledged that mobile carriers won’t request ATSC 3.0 from handset makers until there is proven consumer demand for those services.

While ATSC 3.0 is an over-the-air broadcast standard, another big question is whether cable operators and other pay-TV providers will pass through or retransmit ATSC 3.0 signals and services over their networks.

Schelle said there is a keen desire from broadcasters to provide 3.0’s advanced services to cable operators and other multichannel video programming distributors and that work is underway to develop a technical solution for that. “They’re moving to IP. And we’re IP [with ATSC 3.0],” Schelle said.

“Look for some [cable industry-related] announcements heading into NAB,” Schelle said, referring to the show that will be held here in Las Vegas from April 18-22.

Q&A: What you need to know about Gov. Newsom’s drug plan for California