Biohaven Pharmaceutical Holding Co Ltd (NYSE:BHVN) insider Robert Berman sold 125,000 shares of the stock in a transaction dated Monday, December 30th. The shares were sold at an average price of $53.22, for a total value of $6,652,500.00. Following the completion of the transaction, the insider now directly owns 125,341 shares in the company, valued at approximately $6,670,648.02. The transaction was disclosed in a filing with the Securities & Exchange Commission, which is available at the SEC website.

Biohaven Pharmaceutical Holding Company Ltd., a clinical-stage biopharmaceutical company, develops late-stage products candidates targeting neurological diseases in the United States. Its clinical stage products include Rimegepant, a product that has completed phase III trials and is in long-term safety ongoing process for acute treatment and prevention of migraine; BHV-3500 that has completed phase I clinical trial for acute treatment and prevention of migraine; and Troriluzole that has completed II/III randomization phase and is ongoing extension trial for ataxias.

Featured Article: How accurate is the Rule of 72? 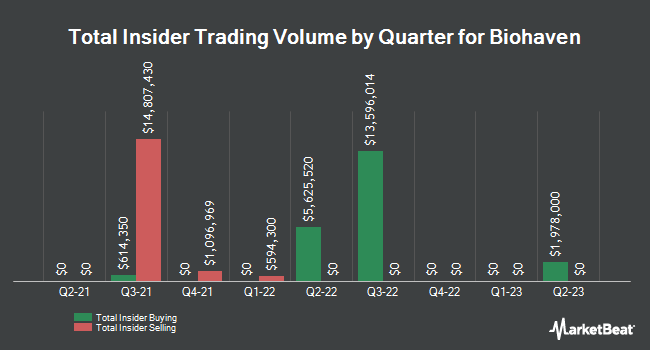