Study Reveals How Emotions Shared On Social Media Have Changed Over The Course Of Last Decade! / Digital Information World

399
SHARES
2.3k
VIEWS
Share on FacebookShare on Twitter
Years change and so do people’s emotions. A person who is angry today might be celebrating something with full joy tomorrow. So, it’s quite normal for emotions and feelings to change as time progresses. Let’s connect this to social media for a second. The internet has been around for quite some time now and people have shared online their happiness, sadness and whatnot!

So, it was only fair if we got to know how the emotions we share online changed over this past decade (2010 – 2019). Thanks to Brandwatch Consumer Research’s automatic labeling of emotion-led posts and a sampled search of tweets dating back to 2010, a graph has been prepared that shows how emotions people share online such as “joy”, “surprise”, “fear” and others have changed over the decade.

Let’s start with anger… the emotion in question was observed in nearly 19% of the posts (sample) back in 2010. The following years saw the percentage going up, even crossing the 20% mark on two occasions. However, it gradually started to come down and now in 2019, it is significantly less than what it was at the start of the decade. It’s definitely a relieving statistic!

Moving over to sadness and disgust now, the study shows that these two emotions have actually increased their presence on the internet from 2010 to 2019. Posts expressing disgust have crossed the 10% mark and those expressing sadness have gone beyond the 20% mark. It’s quite alarming to say the least.

The element of shock shouldn’t be counted out just yet. Online posts in which people expressed the emotion of surprise didn’t encounter any interesting developments in the last 10 years and the emotion’s placement on the graph has remained fairly constant. The same goes for fear.

Now, it’s time to highlight the best part of the study, something that would convince us that positivity still exists in the world and is going quite strong as well, if we choose to pay attention to it. In case you are confused, we are referring to how the emotion of joy enjoyed a clear-cut dominance in the online world from 2010 to 2019.

Shedding more light on it, the study revealed that posts depicting joy outperformed posts expressing other emotions every single year, starting from 2010 and culminating in 2019. Not once in the last 10 years has the joy percentage fallen below the 40% mark. It surely gives us pleasure to know this and we hope that the percentage of the said emotion reaches new heights in the new decade.

The study in question is surely packed with some interesting details. It makes us realize how emotions online constantly change in the same way as they do offline. Although we hope for more positivity and it’s a good thing to do so, life is a blend of all emotions and it’s likely that we will continue to see every kind of feeling expressed as years change.

Keep on following us for receiving the latest scoop on the developments happening in the world of social media and tech on a daily basis. 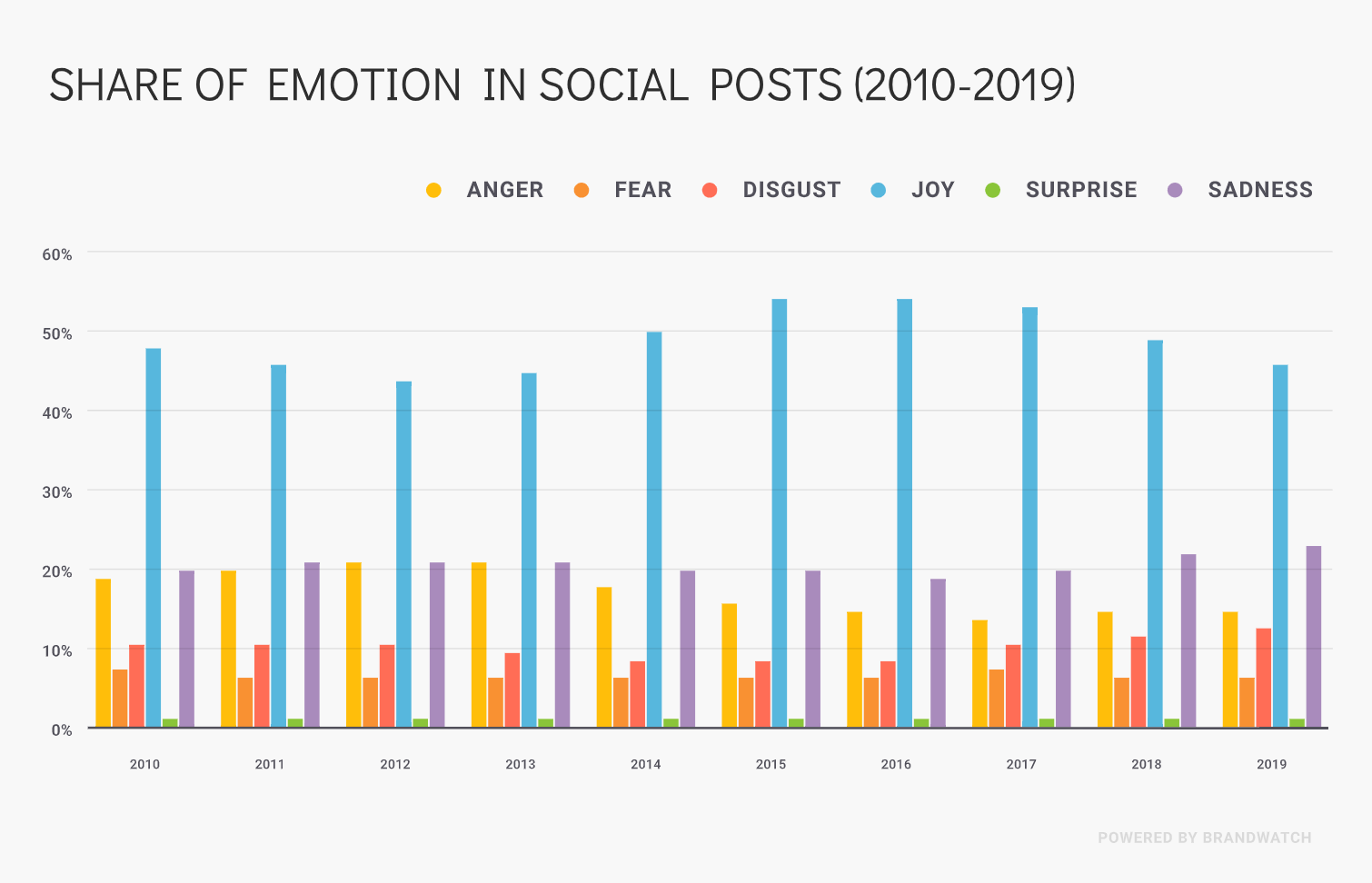