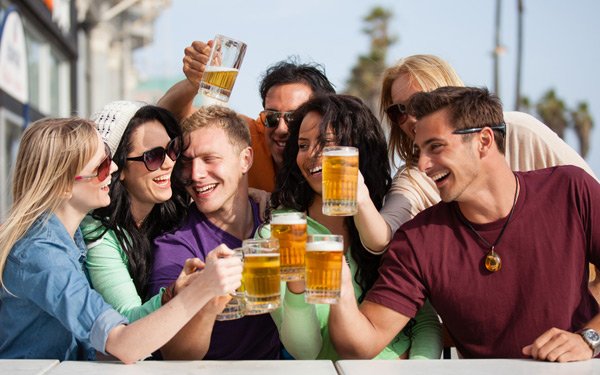 A scene from the past? Young people ARE drinking less, according to study.

What to
make of this? A report from investment banking and research firm Cowen says brewers and tobacco companies may face a tough time since consumers — and schoolchildren — are deciding that
alcohol and smoking are bad news.

But they’re turning to vaping and cannabis as substitutes.

The report from Cowen analyst Vivien Azer sees  “teens increasingly
shifting away from legacy consumption offerings” and weighing risks between vaping and cigarettes and between alcohol and cannabis.

The firm looked at data from the Institute for Social
Research at the University of Michigan, which surveyed children in the eighth, tenth and twelfth grades. The latest edition of the annual  survey was published last week in the annual
“Monitoring the Future” report for the National Institutes of Health.

Those surveys show that more than 50% of teenagers in 1992 said they had used alcohol in the previous 30 days
compared to just 29.3% who said that this year. But 22.3% of teens today said they have used cannabis in the last month, compared to just 11.9% in 1992. And the pattern of teen vaping closely follows
the same behavior of teens and cigarettes in 1992.

The Cowen report is about business patterns, not whether teen drinking, smoking or vaping is good behavior.

The trend away
from liquor is consistent with another trend the  Cowen report says. “As these trends have been borne out, we continue to see declines in lifetime alcohol incidence, which currently stands
at 58.5% vs. 61.5% in 2017.”

But the trends likely have implications for the future.  Azer notes a decline in the use of alcohol over the lifetime of consumers, which she guesses
may be the result of concerns by the “increasingly health-conscious consumer.”

The danger to the beer business, from young people and consumers at large, seems to be centered on
legacy brands, which have been in decline for some time as imports and craft beers still continue to grow. The distilled spirits continues to gain market share and the relatively new seltzer business
is still expanding, the Cowen reports says.

Azer and associates summarized where the shift in popular vices means for several publicly traded stocks, noting with approval that Boston
Brands’ success with Truly seltzer has  “changed its revenue algorithm.” positively. The company’s flagship Sam Adams, is, to some, one of the first craft beers, but its
luster dimmed as more craft brewers crowded the scene.

Like the  relatively new hard seltzer business, the distilled spirits area is still expanding, too.

Distiller Brown-Forman,
best known for its Jack Daniel’s bourbon, is “firmly positioned” in the marketplace, while Molson-Coors “over-indexed” in mainstream beers.  The report says

The outlook for Altria, whose Philip Morris USA subsidiary makes cigarettes like Marlboro and many others, might seem “discouraging,” but Azer notes that the
“unit economics” between a pack of cigarettes and a vaping pod may help the company’s bottom line.  Translation: There’s a lot of profit in a pack of cigarettes.