Squarepoint Ops LLC trimmed its holdings in shares of Meritor Inc (NYSE:MTOR) by 28.2% during the third quarter, according to its most recent Form 13F filing with the SEC. The firm owned 100,185 shares of the auto parts company’s stock after selling 39,313 shares during the period. Squarepoint Ops LLC owned approximately 0.13% of Meritor worth $1,853,000 at the end of the most recent reporting period.

Meritor (NYSE:MTOR) last announced its quarterly earnings data on Wednesday, November 13th. The auto parts company reported $0.83 EPS for the quarter, topping analysts’ consensus estimates of $0.68 by $0.15. Meritor had a return on equity of 78.25% and a net margin of 6.63%. The business had revenue of $1.03 billion during the quarter, compared to analysts’ expectations of $1.06 billion. During the same period in the previous year, the firm earned $0.82 earnings per share. The firm’s quarterly revenue was down 4.8% compared to the same quarter last year. On average, research analysts expect that Meritor Inc will post 2.82 EPS for the current fiscal year.

In other Meritor news, SVP Chris Villavarayan sold 15,000 shares of Meritor stock in a transaction on Wednesday, December 4th. The shares were sold at an average price of $23.47, for a total transaction of $352,050.00. Following the completion of the transaction, the senior vice president now directly owns 45,115 shares of the company’s stock, valued at $1,058,849.05. The transaction was disclosed in a document filed with the SEC, which is available at the SEC website. Also, CFO Carl Douglas Anderson II sold 10,497 shares of the stock in a transaction that occurred on Monday, December 2nd. The stock was sold at an average price of $24.75, for a total value of $259,800.75. The disclosure for this sale can be found here. Over the last three months, insiders sold 250,728 shares of company stock valued at $6,179,082. Insiders own 3.50% of the company’s stock. 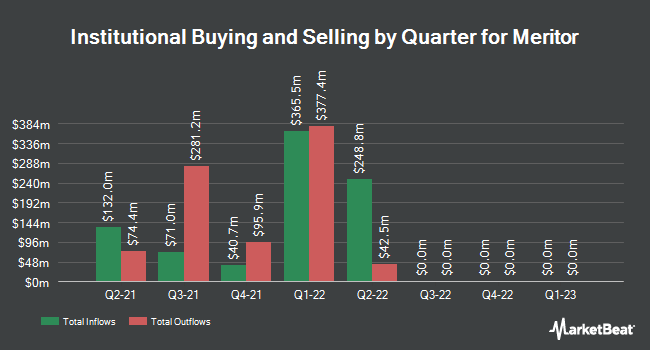 Receive News & Ratings for Meritor Daily – Enter your email address below to receive a concise daily summary of the latest news and analysts’ ratings for Meritor and related companies with MarketBeat.com’s FREE daily email newsletter.