Analysts predict that J & J Snack Foods Corp (NASDAQ:JJSF) will announce $283.15 million in sales for the current quarter, according to Zacks. Two analysts have provided estimates for J & J Snack Foods’ earnings. The lowest sales estimate is $283.00 million and the highest is $283.30 million. J & J Snack Foods reported sales of $271.61 million during the same quarter last year, which would suggest a positive year-over-year growth rate of 4.2%. The firm is scheduled to report its next quarterly earnings results on Monday, January 27th.

According to Zacks, analysts expect that J & J Snack Foods will report full year sales of $1.22 billion for the current year. For the next year, analysts forecast that the company will post sales of $1.26 billion, with estimates ranging from $1.25 billion to $1.27 billion. Zacks’ sales calculations are an average based on a survey of research analysts that follow J & J Snack Foods.

J & J Snack Foods (NASDAQ:JJSF) last released its quarterly earnings results on Thursday, November 7th. The company reported $1.36 earnings per share for the quarter, missing the Thomson Reuters’ consensus estimate of $1.45 by ($0.09). The company had revenue of $311.87 million during the quarter, compared to the consensus estimate of $309.50 million. J & J Snack Foods had a net margin of 7.99% and a return on equity of 11.75%. The firm’s revenue was up 3.7% compared to the same quarter last year. During the same period in the prior year, the company earned $1.24 earnings per share.

The company also recently disclosed a quarterly dividend, which will be paid on Tuesday, January 7th. Shareholders of record on Friday, December 20th will be paid a dividend of $0.575 per share. This represents a $2.30 annualized dividend and a yield of 1.26%. This is a positive change from J & J Snack Foods’s previous quarterly dividend of $0.50. The ex-dividend date is Thursday, December 19th. J & J Snack Foods’s payout ratio is presently 40.40%. 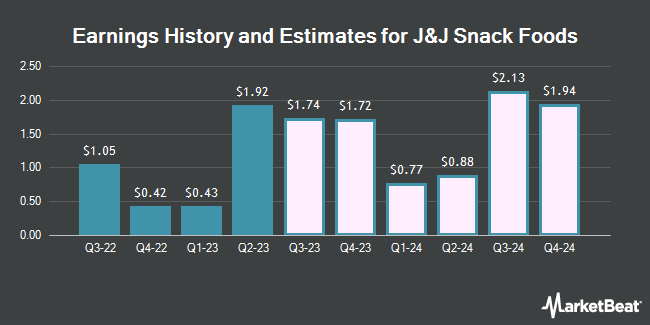 Accounting and law faculty member published in ‘The Value Examiner’

Accounting and law faculty member published in 'The Value Examiner'