Cary, N.C. — Consultants who reviewed Wake County public schools’ controversial MVP math program told district leaders Monday that they should continue using the curriculum but they need to provide more support for students, teachers and parents, some of whom continue to struggle with the material.

MVP’s curriculum, which Wake schools began using in 2017-18, encourages students to work together to solve problems instead of relying solely on the teacher for instruction. Some parents have complained that the program has caused their children to struggle with math.

The Wake County Board of Education has continued to stand by the program, saying an internal review found that the curriculum did not violate any laws, rules or policies. The board voted to have an outside company, MGT of America Consulting, review MVP math, costing no more than $125,000. The group’s review included classroom visits, analysis of student work, in-depth data review, and focus groups.

On Monday, MGT consultants presented their findings, which included the following recommendations:

The consulting group gathered feedback from the following:

Parents were especially critical of the program, according to survey results, which showed a majority of the parents said MVP has been frustrating to their child and their child’s math performance has declined. Eighty-one percent of parents said they have received no updates or communication about MVP. 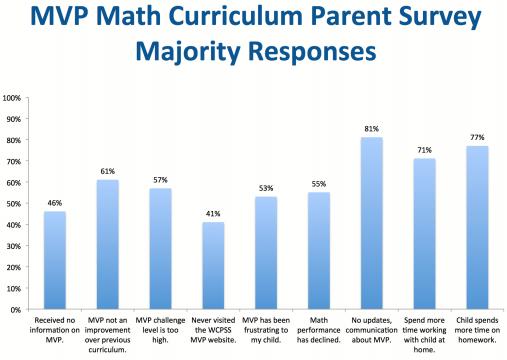 Wake schools have invested more than $1.4 million in MVP math since the program launched in 2017.

In June, the board reviewed a committee’s 17-page report about MVP. The committee “determined there were no violations of school board policy and no violations of law. In addition, no member of the committee recommended removing MVP and replacing it with a new curriculum,” according to the report. “While the 2017-18 results indicate a modest improvement in student performance, additional years of data will be needed to confirm details.”

Committee members did recommend some changes, including more professional development for teachers and support materials for students. But some parents who reviewed the report said they were still not pleased with the school system’s response and questioned the accuracy of the report.