The bad news for cosmetics companies and retailers is that Generation Z — usually the top buyer of cosmetics — is spending less on makeup. The good news is these buyers follow the trends set by social media stars and influencers, and that element is what could help retailers like Ulta (NASDAQ:ULTA) and beauty companies like Coty (NYSE:COTY) develop a winning strategy.

Both companies have turned to social media celebrity Kylie Jenner, and as Ulta’s recent earnings report showed, the effort is starting to pay off. Ulta, which features Jenner’s Kylie Cosmetics line, surpassed third-quarter earnings estimates and said the brand is driving excitement and bringing new customers into the store. 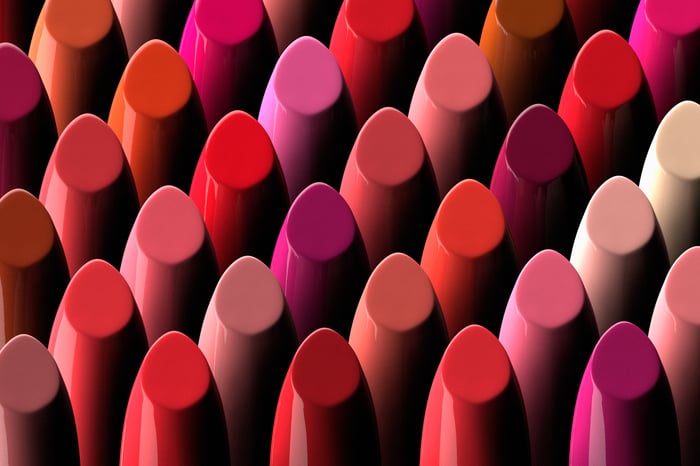 Last month Coty announced a strategic partnership with Jenner meant to build her cosmetics line into a major global brand. The owner of brands including CoverGirl and Rimmel is paying $600 million for 51% of Jenner’s business. Coty said the operation won’t impact earnings per share in the first year and is expected to add to it thereafter. Kylie Cosmetics’ net revenue for the 12 months prior to the deal totaled $177 million.

Out of makeup, into skin care

For Ulta and Coty, now is the perfect time to be working with an influencer and entrepreneur like Jenner. The main buyers of cosmetics are women in their 20s, followed by teens, according to data from Social Standards, although they’re no longer readily spending on makeup. Piper Jaffray’s latest teen survey showed a 21% year-over-year decline in cosmetics spending, and in more bad news, Vogue Business in August wrote about a shift in purchases out of makeup and into skin care. Ulta makes 51% of its sales from cosmetics and only 21% from skin care, bath, and fragrance, according to its most recent annual report. As for Coty, its “consumer beauty” unit, with a strong focus on cosmetics, reported a 17% year-over-year decline in 2019 fiscal year net revenue. At the same time, its “luxury” unit, which includes skin care, saw a 3% increase.

Ulta CEO Mary Dillon, in the recent earnings call, said that for the entire industry, the weakening in makeup began in 2017, and worsened in the most recent quarter. She said she’s optimistic that innovation will bring cosmetics back to growth, but the timing of that is difficult to predict.

So, among all of the influencers and social media stars, why Kylie Jenner and what exactly can she do for companies like Ulta and Coty?

Jenner, already a media celebrity as a member of the Kardashian family, launched the Kylie Lip Kit four years ago so that followers could re-create her look. She and her company together have a total of more than 175 million followers on Instagram, the platform where she posts photos and videos of her products, and herself and other models wearing them. Time magazine named Jenner among the most influential teens in 2014 and 2015, and from that point, the reason why fans relate to her is clear: In a Time interview, Jenner talked about buying cheaper brands just like everyone else and posting photos of less expensive clothing to re-create her looks. Fast-forward a few years and that audience who loves her and can relate to her is ready to buy her brand.

At a time when a company’s major product — in this case, cosmetics — is hit by a slowdown, partnering with someone like Jenner, who communicates daily and directly with the customer, and is admired by the customer, may be the ticket to making it through the makeup downcycle and to long-term success. Ulta’s shares, down 30% from this year’s high and trading at 21 times earnings, offer a reasonable entry point for investors. And the average analyst price target of $281 offers room for upside as the shares now trade at about $250. Coty trades just under 20 times earnings, lower than the 29 times earnings for the cosmetics industry, according to Zacks research, also offering an entry point. Coty shares have fallen 15% from this year’s high and analysts expect upside of 11%. Though cosmetics still remain weak, for the longer-term investor, Ulta and Coty might have found the right formula for success.

Penney (JCP) Up 0.9% Since Last Earnings Report: Can It Continue?

$95.79 Million in Sales Expected for Novocure Ltd (NASDAQ:NVCR) This Quarter

$95.79 Million in Sales Expected for Novocure Ltd (NASDAQ:NVCR) This Quarter