History doesn’t already repeat itself—and traders who blindly expect it to so do (i.e. sans subjective review) are oft flushed down the loo—but ’tis the season to be jolly. For in looking per the above Scoreboard at ‘s weekly price tracks for each of the past three completed years, from here to New Years ’tis been up through the gears. And given Gold having settling out the week on Friday at 1480, our entitled query from two missives ago “” suggests he’s primed to come through. Even our WestPalmBeacher friends can calculate that 1500 is a mere 20 points above this present 1480 level.

In fact, so near now is price to regaining 1500 that ole St. Nick could well arrive early. With seven trading days still to play into the so-called “night of nights,” Gold’s “expected daily trading range” is 14 points and its “expected weekly trading range” is 37 points. Seeking further encouragement for upside? Let’s look straight-away at Gold’s Weekly bars from a year ago-to-date… 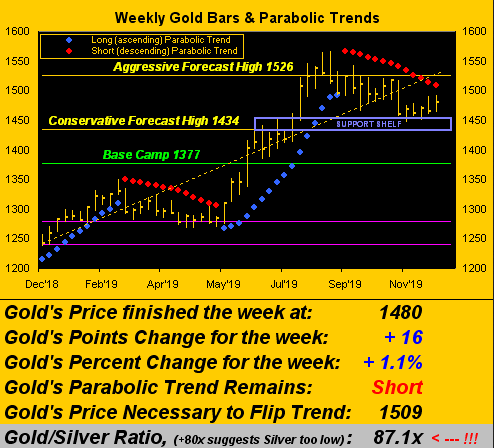 …wherein we see the “support shelf” rectangle (1454-1434) having been diligent to its namesake, plus the red-dotted parabolic Short trend visually nearing its end. Indeed were 1509 to trade in the new week—again a level mathematically within expected range—the parabolic trend then would flip to Long with subsequent piling on from the celebratory New Year’s throng. Hasn’t happened yet, natch, but the above analytics are chomping at the upside bit. Further, we can all do our part by gifting Aunt Edith or Uncle Egbert with an Austrian Philharmonic or Chinese Panda Gold round. The point is: barring some fundamental fallout, Gold is driving back up the road to regain 1500, indeed end the year there unencumbered.

‘Course, the packed pace of news flow these days is so furiously fast that the 11 trading days remaining in 2019 are subject to each and all of this, that and the other thing. The on-again-off-again U.S./China trade deal has yet again gone from off-again to on-again. Blondie Boris’ Brexit is now implicit. Newly signed is the United States-Mexico-Canada Agreement. And in sheer enjoyment over everything, the earnings-less stock market has never been happier, the finishing the week at an all-time closing high of 3169, (our “live” price/earnings ratio having climbed to 37.4x). “Earnings, shmernings … who needs ’em, eh?” Yet, our Economic Barometer has suddenly been so boffed about that it’s lost all sense of near-term trend:

Notwithstanding the prior week’s November StateSide (as we’d noted the robust Department of Labor Statistics version of a +71% monthly increase versus the ADP (NASDAQ:) version of a -45% decrease), there are degrees of gloom out there. November’s core / pricing was deflationary as was the month’s ; growth in the month’s slowed and October’s bloated. America’s favourite do-it-yourself store Home Depot (NYSE:) is pointing to next year’s revenues being less than expected. And at the latest “Business Roundtable,” those at the top continue to predict an economic growth drop.

All that noted, ’tis “all in” with respect to stocks. As updated daily, here from the website is the S&P 500’s points change (red line) from three months ago-to-date along with its moneyflow (blue line) regressed into S&P points such that it is presented on the same scale. From the time the worksheet that drives this graphic was created back in 2005, we don’t recall ever having seen this tight a fit between the S&P and its moneyflow. ‘Tis one substantive up move for stocks: 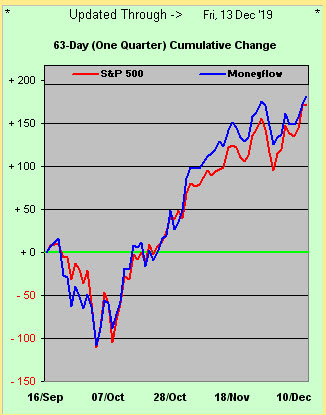 However: lacking upside substance is the current state of the precious metals’ “Baby Blues,” that key metric we use to measure the consistency of a market’s linear regression trend. Here is the two-panel display of daily bars from three months ago-to-date for Gold on the left and on the right, both markets seeing their blue dots waning from their recent tracks of rising. Still, such state doesn’t mitigate this missive’s thrust that Gold is targeting 1500 into year-end: but the respective prices for both metals certainly during the last several weeks have hardly driven up straight roads: 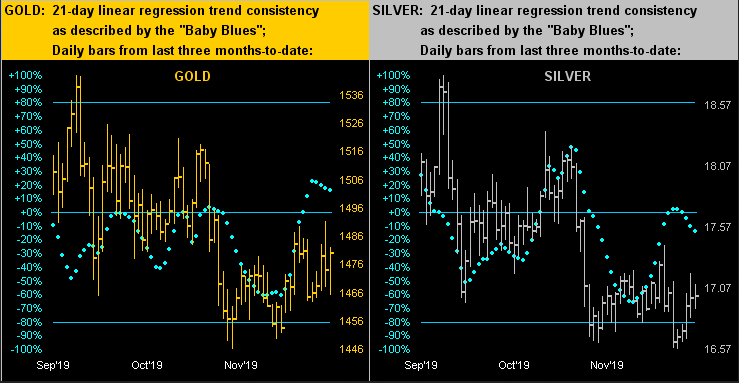 Fortunately, those roads are reinforced with trading support as shown by the 10-day Market Profiles for both Gold (left) and Silver (right). The yellow metal has built in a contract volume base throughout the 1470s; the white metal less so with a fairly glowing gaposis sub-16.95 down to volume support at 16.65. Still, Gold’s higher glide ought to directionally pull Sister Silver alongside, (especially given the alarmingly-high Gold/Silver ratio of 87.1x): 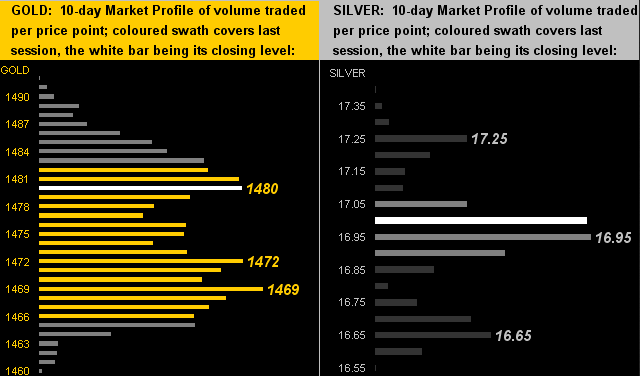 For our analytical wrap, here next is The Gold Stack … and note its top line so very near a major millennia milestone, (nudge nudge, hint hint, elbow elbow…):

Gold’s Value per Dollar Debasement, (from our opening “Scoreboard”): 2996

Trading Resistance: (none, by the above profile)

In closing, a tip of the cap is an understated gesture to Paul Volcker, inarguably the boldest central banking chief of our time, his having passed this past week at 92 within the financial canyons of his mighty Manhattan. Clearly utilizing courage over caving in comparison to successor Federal Reserve Bank Chairs, he did in his prime what had to be done for that time: and it worked. Today, you too can prepare for future time: reach for some Gold so as to stay in your prime!