Diodes Incorporated (NASDAQ:DIOD) insider Richard Dallas White sold 23,500 shares of the stock in a transaction on Thursday, December 12th. The shares were sold at an average price of $49.34, for a total transaction of $1,159,490.00. Following the completion of the transaction, the insider now owns 88,806 shares of the company’s stock, valued at approximately $4,381,688.04. The sale was disclosed in a filing with the SEC, which is accessible through this link.

Diodes (NASDAQ:DIOD) last announced its earnings results on Monday, November 4th. The semiconductor company reported $0.81 earnings per share (EPS) for the quarter, topping analysts’ consensus estimates of $0.78 by $0.03. The business had revenue of $323.67 million during the quarter, compared to analysts’ expectations of $322.90 million. Diodes had a net margin of 10.74% and a return on equity of 14.60%. The firm’s revenue for the quarter was up .8% on a year-over-year basis. During the same quarter last year, the company posted $0.68 EPS. On average, research analysts predict that Diodes Incorporated will post 2.9 EPS for the current fiscal year.

A number of equities research analysts recently issued reports on the stock. Zacks Investment Research upgraded shares of Diodes from a “hold” rating to a “buy” rating and set a $51.00 target price for the company in a research report on Thursday, November 7th. Wells Fargo & Co assumed coverage on shares of Diodes in a research report on Monday, August 19th. They set an “outperform” rating and a $55.00 target price for the company. Finally, BidaskClub cut shares of Diodes from a “strong-buy” rating to a “buy” rating in a research report on Friday, November 8th. Three equities research analysts have rated the stock with a hold rating and three have given a buy rating to the company’s stock. Diodes currently has an average rating of “Buy” and a consensus target price of $53.00.

Diodes Incorporated, together with its subsidiaries, designs, manufactures, and supplies application-specific standard products in the discrete, logic, and analog and mixed-signal semiconductor markets in Asia, North America, and Europe. It primarily focuses on low pin count semiconductor devices with one or more active or passive components. 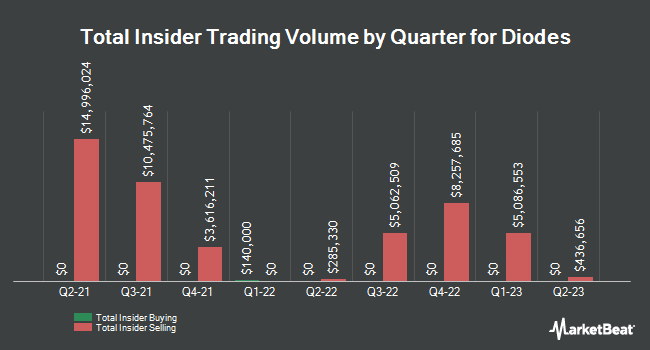 Receive News & Ratings for Diodes Daily – Enter your email address below to receive a concise daily summary of the latest news and analysts’ ratings for Diodes and related companies with MarketBeat.com’s FREE daily email newsletter.

Delivering client care with a wow – the case for ou…

A systematic review and meta-analysis

A systematic review and meta-analysis