Equities research analysts forecast that DISH Network Corp (NASDAQ:DISH) will report sales of $3.17 billion for the current fiscal quarter, according to Zacks Investment Research. Five analysts have provided estimates for DISH Network’s earnings, with estimates ranging from $3.13 billion to $3.20 billion. DISH Network posted sales of $3.31 billion during the same quarter last year, which suggests a negative year over year growth rate of 4.2%. The company is scheduled to announce its next quarterly earnings report on Wednesday, February 12th.

On average, analysts expect that DISH Network will report full year sales of $12.72 billion for the current fiscal year, with estimates ranging from $12.69 billion to $12.77 billion. For the next fiscal year, analysts forecast that the firm will report sales of $12.25 billion, with estimates ranging from $11.95 billion to $12.75 billion. Zacks’ sales calculations are a mean average based on a survey of sell-side analysts that cover DISH Network.

DISH Network (NASDAQ:DISH) last announced its earnings results on Thursday, November 7th. The company reported $0.66 earnings per share for the quarter, beating the consensus estimate of $0.59 by $0.07. DISH Network had a net margin of 10.47% and a return on equity of 14.55%. The business had revenue of $3.17 billion during the quarter, compared to the consensus estimate of $3.16 billion. During the same period in the prior year, the firm earned $0.82 earnings per share. The business’s quarterly revenue was down 6.6% compared to the same quarter last year.

In related news, EVP Jeffrey L. Mcschooler sold 1,787 shares of the stock in a transaction dated Tuesday, November 26th. The shares were sold at an average price of $35.34, for a total value of $63,152.58. The transaction was disclosed in a legal filing with the SEC, which is available at the SEC website. 52.80% of the stock is owned by company insiders.

DISH Network Corporation, together with its subsidiaries, provides pay-TV services in the United States. The company operates in two segments, Pay-TV and Wireless. It offers video services under the DISH TV brand; and programming packages that include programming through national broadcast networks, local broadcast networks, and national and regional cable networks, as well as regional and specialty sports channels, premium movie channels, and Latino and international programming packages. 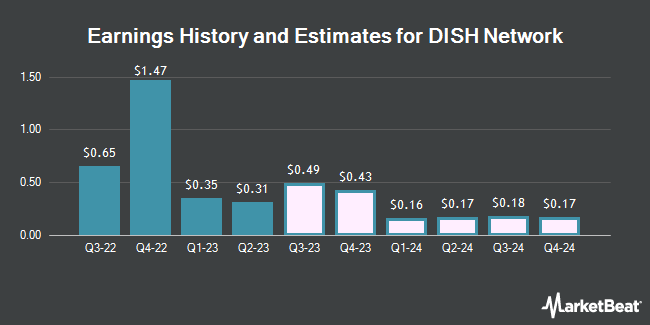