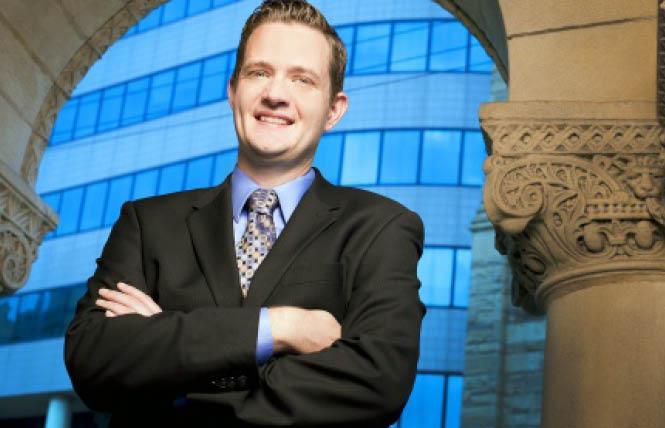 LGBT seniors living in San Francisco face obstacles to receiving care that their heterosexual, cisgender counterparts often do not, according to a needs assessment conducted by UCSF.

The university released the report December 5.

“Many systems were not built with LGBT people in mind, particularly older transgender people and LGBT people of color,” said Jason Flatt, Ph.D., a gay man who is the director of Rainbows of Aging, a UCSF program that researches LGBT seniors. “LGBT seniors are more likely to live alone, so they don’t have caregivers who can help them navigate those systems.”

The numbers seem to bear that out, with nearly half of San Francisco LGBT seniors facing mobility concerns and one in five saying they feel unsafe in their communities, according to data included in the needs assessment report.

Up to 70% of LGBT seniors reported facing major health problems, including between 20 and 25% who live with HIV/AIDS, according to data included in the needs assessment report from a 2013 University of Washington survey of LGBT seniors in San Francisco.

Flatt said that sometimes, older LGBTs face overt homophobia in programs aimed at caring for seniors.

“The number one priority is really around education and instituting cultural humility — training staff to be welcoming,” Flatt said. “It wasn’t so long ago that LGBT people could be incarcerated and their identities viewed as a mental disorder.”

Flatt said that LGBT seniors often face false assumptions from the wider society, such as the “myth of gay affluence” — the idea that LGBT adults are wealthier than their heterosexual counterparts because they are viewed as less likely to have children, though that has changed in recent years, with more same-sex couples raising families.

“Because LGBT people are less likely to have children, there’s a bias that they must be better off. We’ve found many live in poverty,” Flatt said. “We don’t think often about LGBT people who are older, living alone in poverty. That’s not who you see in the media. Typically you see white, gay men, but our community is as diverse as others.”

The needs assessment included discussions with six focus groups of LGBT seniors, as well as interviews with caregivers, between October 2018 and June 2019. There were 46 participants in the focus group interviews. Data was also culled from 63 participants in a survey that UCSF administered in the same time-span, 60% of whom were “LGBTQ seniors interested in using aging services” and 40% of whom were caregivers.

Flatt said that LGBT seniors need programs specific to the concerns and needs of their communities — which is exactly what Grace Li and Karyn Skultety are planning, with information about a new adult day services program coinciding with the release of the UCSF needs assessment report.

Skultety, a bisexual woman, is the executive director of Openhouse, which provides some housing for LGBT seniors and other services. Li is the CEO of On Lok, which provides senior services more generally. Together the organizations are embarking on a partnership that will provide a Tuesday-Saturday day program where LGBT seniors can socialize and have their needs met.

The program — which Skultety called a “community day” — will be held at the Laguna Street location of Openhouse, according to Skultety. Li said it will be technically run by On Lok, although both organizations will work together to build it and train staff.

“Staff on site can help them with eating lunch, going to the bathroom, and remove any of the barriers they may face,” she added.

Li said that she is excited about the opportunity to put the decades of On Lok’s experience with seniors to the task of helping the LGBT community specifically.

“Karyn and I have had the chance to work together for 10 years and when we each came to be the leaders of our respective organizations, which help vulnerable populations, it just seemed like perfect timing,” Li said, referring to Skultety. “Our conversation with the board of directors was an easy yes.”

Li said that she and Skultety have been discussing and designing the program since “early spring 2018.”

In fact, last year the Bay Area Reporter mentioned the new partnership, and noted at the time the program was planned to start this year.

“Construction delays contributed to the delay in opening,” according to Betsy Levy, a spokeswoman for the partnership.

Openhouse’s new housing project at 95 Laguna opened to residents earlier this year. It includes a large community space where the day program will be held that is not quite finished.

“On Lok will be hiring the staff and training them in collaboration with Openhouse in creating a design that is sort of a three-way approach with the community, with Openhouse and with our expertise,” Li said.

Skultety said that the program has to be approved by the state (On Lok is seeking an adult day service license, Levy said) and that they are looking at a start date sometime in April or May.

“A key element to this project being successful is how much we incorporate input and direct feedback from LGBT seniors themselves,” Skultety said. “We know a lot of traditional aging programs work in a paternalistic, top-down way and that’s why LGBT seniors aren’t using them. They can be too focused on traditional family structures and not focused on communities.”

LGBTQ Agenda is an online column that appears weekly, usually on Tuesdays. Got a tip on queer news? Contact John Ferrannini at [email protected]