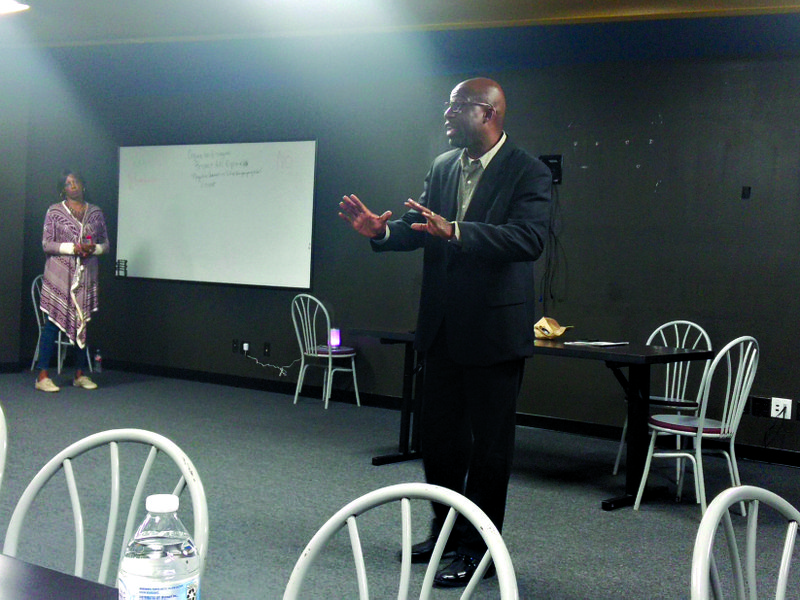 CAMDEN  A group of Camden residents met at the Ouachita Valley Business and Technology Center last Thursday in the first of several planned “Paths to Prosperity” economic think-tank sessions.

The session was led by motivational speaker, the Rev. Stephone Avery Sr.

At the begining of the meeting, Camden Mayor Julian Lott thanked everyone for coming and touted some of the recent successes of the city such as a 20-year intermodal plan involving bicycles and sidewalks.

“I went into a meeting the other day and a lady said she had come and stayed in Camden,” Lott said. “She said that when she was here in Camden she went to the hotel, she walked to the front desk, she said to the lady, ‘What is there to do here?’

Lott revealed that the guest was involved in economic development and also reflected about how negative Facebook posts affect the perception of Camden.

Reese Broadnax of Workforce Development spoke about the recent work of the University of Central Arkansas’ Community Development Institute.

The group visited Camden and held small focus groups in August. A group of more than 60 people were separated by table. Each table had its own topic such as “Parks and Recreation”, “Health and Welfare” or “Utilities and Infrastructure.” After the smaller groups discussed the positives and negatives of that table’s topic, the members would rotate to the next table.

Broadnax shared what the focus group on recreation said were the bright spots and low points in Camden.

The CDI website states, “The CDI 2019 Advanced Year with their Class Directors Lorie Robertson of Chaffee Crossing and Amy Williams of the Cabot Chamber of Commerce traveled to Camden, AR to work directly with community leaders to assess the city. The Advanced Year conducted online research, focus groups, a driving tour, and informal interviews with residents during the week of CDI 2019.

Through their work, they shared a community presentation that outlined key opportunities and the city was provided with a report that they can utilize in future planning efforts.”

Michael Smith of Edward Jones Investments said he would like to see a “welcoming committee” formed in conjunction with the Chamber of Commerce.The next meeting will take place Jan. 30 at 6 p.m. in the conference room of the Ouachita Valley Business and Technology Center.

‘Financial infidelity’: What defines it, who is at risk, and what are the consequences?

'Financial infidelity': What defines it, who is at risk, and what are the consequences?