Community members from Beaufort, South Carolina, trained palliative care physicians on how to have culturally appropriate conversations with their patients based on their backgrounds and ethnicities.

In late August, four palliative care doctors, two researchers and several community members gathered in Beaufort, South Carolina, to gain insight into the history and culture of two rural Southern communities, White and African American, and to understand the cultural values and preferences of each of these two ethnic groups in caring for patients with serious illness.

Culture shapes how people make meaning out of illness, suffering and dying, and it influences their responses to diagnosis, prognosis and treatment preferences. Lack of respect for cultural differences may compromise care for seriously ill minority patients. However, culturally appropriate models of palliative care are not currently available. 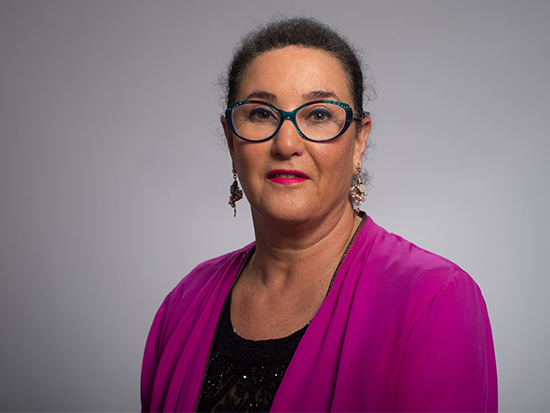 Ronit Elk, Ph.D.“Until now, there was no such thing as culturally based protocol for patients with serious illness or for end of life care, until this team of community members developed one for rural southern African Americans and another for Whites,” said Ronit Elk, Ph.D., a researcher in the Division of Gerontology, Geriatrics and Palliative Care at the University of Alabama at Birmingham.

For three and a half years, Elk and her colleagues worked with teams of white and African American community advisory board members to create this culturally based protocol. It was determined after focus groups held with community members who had been a caregiver to a loved one who had recently died.

“I started with the focus group six weeks after my husband passed away,” said Jonnie Grant, one of the group’s members. “I was a newly widowed person who was not knowing where to go or what to do.”

Gardenia Simmons-White, a member of the community advisory board said working with the advisory group and learning of each other’s beliefs helped them create the protocol and form a mutual respect of each other’s cultures.

“When you take care of people, you care for people of all different nationalities and beliefs. You have to understand that everyone has different beliefs,” Simmons-White said. “You have to understand that everyone’s culture is different, and it is especially true of how African Americans and Caucasians react to end of life diagnoses. We need to know each other’s cultures in order to ask questions and not have stereotypical beliefs. And we need to understand our history in order to have respect.”

This unusual gathering was part of a training conducted by the community members to prepare the palliative care physicians for a Randomized Clinical Trial in which the efficacy of this community-developed and culturally based protocol will be tested. This trial, funded by the National Institutes of Health and co-led by Elk and Marie Bakitas, DNSc, of the UAB School of Nursing, will compare the culturally based palliative care consult program provided through telehealth, in addition to regular care. They will compare the findings to patients receiving regular care to see if it helps reduce patient suffering, increases the quality of life for the patient and family, and reduces the burden of care for caregivers.

The study will begin patient recruitment in January 2020 and will take place in three rural hospitals, in Alabama, Mississippi and South Carolina.

“When you talk about life-threatening issues, it is good to include the pastor in the conversation,” said Pastor Michael Williams, a community advisory board member, referring to African American patients. “It’s because of faith, because of prayer and the pastor being there, that things will get better.”

Role-play, a commonly used teaching strategy, was also a part of the training. But this time, it was the community members who critiqued the physician, telling them how they felt after they were spoken to about their goals of care conversations, or one about a serious and/or terminal prognosis.

“Patients and their families are really our most generous teachers. We think of ourselves as teachers, but when I think of the work that I get to do as a doctor, it is the patient and the family members that do the teaching,” Hauser said. “I always tell my residents and fellows that the most important teachers we have are the patients, the caregivers and people like you on the community advisory group.”

In addition to the training, the group visited two historical sites, each of which had an important historical meaning to each ethnic group. Old Sheldon Church Ruins, a famous red-stone church, twice burnt down, the first time during the Civil War. Now a relic, it sits among green lawns and palm trees, with a scattering of 50 graves, some of which were used as an operating table during that war. 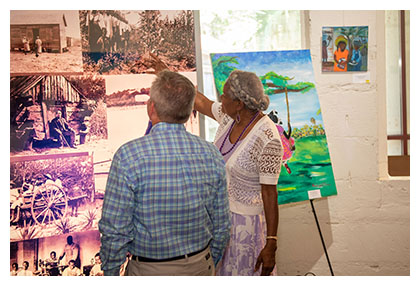 Rodney Tucker, M.D., listens to Gardenia Simmons-White as she explains the history of the Penn Center.The next stop was to the Penn Center on Saint Helena’s Island, the site of the nation’s first school for formerly enslaved people. Simmons-White led the tour, and the group learned how it was the first school in the South for freed slaves, and the center’s role in the civil rights movement.

“Our history was not written into the history books,” Simmons-White explained. “We need to know the significance of what we brought to our culture here. It is always good to know each other’s history because then you can respect them more.”

These visits provided meaningful insight for the clinicians, too.

“I can say visiting the Penn Center has continued to open my eyes to the cultural journey of the individuals for which I care for,” Tucker said. “It is important for me to understand their history, to understand their values, and their lived experience as we move forward with their care.”

“It would be too easy to focus on the nuts and bolts of the training for the protocol itself, but I think going to the Sheldon Church and the Penn Center, was incredibly rich, but the richness extends to the fact that you and this group acknowledges how important that historical context is,” McCammon said. “Everything we are doing now grew out of that history – the good and the bad and what we need to do today to make it better and better serve our patients.”

Impressions of the Training

The physicians time and respect were the most meaningful part of the experience to several of the community members.

“I think it was important for the physicians to see how the local members of the community advisory group have embraced the concept of palliative care and that all as former caregivers, they had a personal experience of dealing with a very ill loved one,” said Cynthia Coburn-Smith, one of the community advisory group members. “It was wonderful to see the physicians get involved in role playing in the retreat. We went over the cultural training protocol we developed with Dr. Elk with the physicians, and we answered their questions on why these issues were important to us.”

One concern was unrealized by one of the members.

“One of my fears was that the doctors were going to come in with their attitudes and they didn’t,” Grant said. “I hope that your memories, and I know that mine, will be cherished and hopefully, we will be able to continue this relationship that we started and be able to do this in the future.”

To the doctors, it was just as worthwhile.

“It is validating for the things that we know, and how we can improve. You started it, and we will continue the next steps,” Tucker said. “If we gather together in another 10 years, I hope there are thousands of physicians outside of us that begin to realize culturally appropriate conversations are so important and not just for end of life or serious illness, but from the very start.”

“We’ve been at it for so many years,” Elk said. “When I think about how everybody came to all of the meetings, everybody still has their books, everyone has been committed to it through all of these years writing the protocol. For me, what we’ve accomplished is beyond a fantasy.”

Thinking Inside the Box: The 4 Fundamental Use Cases in CX