Equities research analysts expect Emcor Group Inc (NYSE:EME) to announce earnings of $1.50 per share for the current fiscal quarter, Zacks Investment Research reports. Two analysts have provided estimates for Emcor Group’s earnings, with estimates ranging from $1.48 to $1.52. Emcor Group posted earnings per share of $1.38 in the same quarter last year, which suggests a positive year over year growth rate of 8.7%. The company is scheduled to announce its next quarterly earnings report on Thursday, February 20th.

On average, analysts expect that Emcor Group will report full year earnings of $5.72 per share for the current year, with EPS estimates ranging from $5.70 to $5.75. For the next year, analysts anticipate that the company will post earnings of $5.94 per share, with EPS estimates ranging from $5.90 to $6.00. Zacks’ EPS averages are a mean average based on a survey of analysts that that provide coverage for Emcor Group.

Emcor Group (NYSE:EME) last announced its earnings results on Tuesday, October 29th. The construction company reported $1.45 earnings per share for the quarter, beating the consensus estimate of $1.41 by $0.04. Emcor Group had a return on equity of 17.11% and a net margin of 3.51%. The company had revenue of $2.29 billion during the quarter, compared to the consensus estimate of $2.17 billion. During the same period last year, the firm earned $1.36 earnings per share. The company’s revenue was up 11.8% on a year-over-year basis.

EME has been the subject of a number of research reports. Maxim Group reiterated a “hold” rating and issued a $95.00 price target on shares of Emcor Group in a research note on Thursday, October 31st. ValuEngine lowered Emcor Group from a “hold” rating to a “sell” rating in a report on Wednesday, October 2nd. Finally, DA Davidson upped their price objective on Emcor Group to $107.00 and gave the company a “positive” rating in a research note on Wednesday, October 30th. One analyst has rated the stock with a sell rating, one has issued a hold rating, two have issued a buy rating and one has given a strong buy rating to the stock. The stock currently has a consensus rating of “Buy” and a consensus target price of $98.50.

In other Emcor Group news, CEO Anthony Guzzi sold 5,000 shares of Emcor Group stock in a transaction on Wednesday, November 13th. The shares were sold at an average price of $89.04, for a total value of $445,200.00. Following the completion of the transaction, the chief executive officer now owns 354,146 shares of the company’s stock, valued at $31,533,159.84. The transaction was disclosed in a filing with the SEC, which is accessible through the SEC website. Insiders own 1.90% of the company’s stock.

Further Reading: What is a balanced fund? 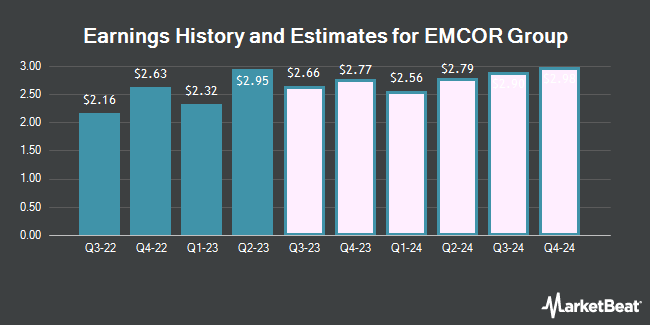