There is often a premium to living near to public transit, and some local governments try to capture this value through property taxes which are in turn used to fund transit infrastructure. In new research which looks at the Washington DC Metro, Edmund Zolnik finds that, while there are significant accessibility premiums for properties close to Metro stations, these values fluctuate so much that they would not be a reliable income source for local government.

Many of America’s public transit systems are often chronically underfunded. One way that local governments can try to plug gaps in operational funding is to try to capture some of the benefits to property values that come from being close to public transportation infrastructure. This can often take the form of a tax on commercial and residential properties in what are called special assessment districts. The goal of this value capture is to generate revenue from the very property thought to benefit the most from access to the infrastructure.

There is a great deal of evidence that property values do benefit from being close to infrastructure. But there is also evidence which shows that these benefits depend on location, time and the type of development. And while these benefits appear to be  resilient to downturns in the wider economy, like the Great Recession, what is not yet known is just how much value is available for capture across the area of an entire public transportation system, and, likewise, just how reliable that value is. My research suggests the premium that accessibility confers to local residential property across an entire system is modest and, unfortunately, not reliable year over year. The latter is a problem for local governments because many transport systems need reliable sources of income in order to compensate for cuts to other revenue sources.

Evidence on the reliability of accessibility premiums has been hard to come by for two reasons: first, they have not been studied extensively over time or place. With that in mind, I studied these premiums across the region covered by Metro services in Washington, District of Columbia (Figure 1) over an entire decade. Second, previous efforts to model value capture rarely account for the effects of both place and time together. I account for this by adopting of a multilevel approach to value capture in which time (year of the transaction) and place (block group of the residential property) are distinct levels of analysis. 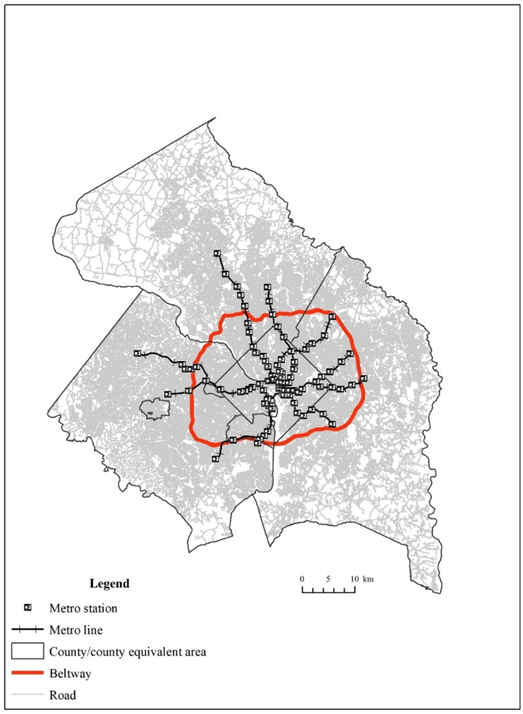 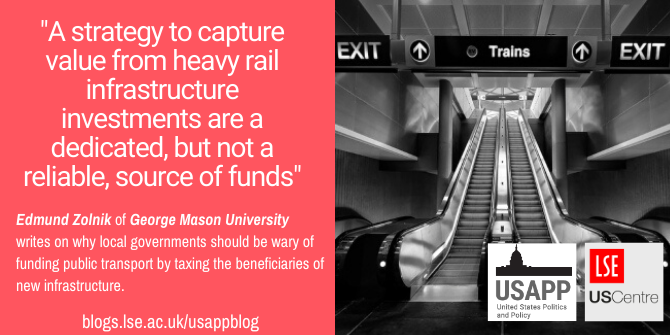 “Metro Escalator” by Eric Minbiole is licensed under CC BY NC 2.0.

Decades of empirical evidence notwithstanding, there are still questions over the feasibility of value capture. Perhaps the most important is the potential revenue base for a property tax. In the past, revenue bases have been studied for a few years and for a few stations or for a few corridors. These small sample sizes in terms of time and place limit the lessons that we can take from these results. Likewise, these small sample sizes limit how accurate and precise we can be when we try to estimate the premium that transit accessibility brings.

I find that there is a +2 percent accessibility premium for the DC Metro system, which is low considering evidence from previous studies, but consistent with meta-analyses which more accurately take into account place and time. The accessibility premium is also probably low because the Metro is a heavy rail system, and my analysis considers all Metro stations except for the five on the new Silver Metro line as well as all of the quarters from the Great Recession. I estimate that the total value available for capture from 2002 to 2014 was about $500 million; not a negligible sum in comparison to the deficit for Metro in fiscal year 2018 of about $300 million.

New property tax revenues from accessibility premiums do qualify as a potential source of revenue to fund the DC Metro. Unfortunately, the accessibility premiums fluctuate dramatically from year to year, as Figure 2 shows. Indeed, from the baseline year of 2005, the accessibility premium within a 2.08-kilometer radius of Metro stations ranges from a maximum of +12 percent in 2006 to a minimum of −0.02 percent in 2007. Overall, my results suggest that a strategy to capture value from heavy rail infrastructure investments are a dedicated, but not a reliable, source of funds.

Figure 2 – Accessibility premiums for all properties versus properties within 2.08 radius of Metro stations 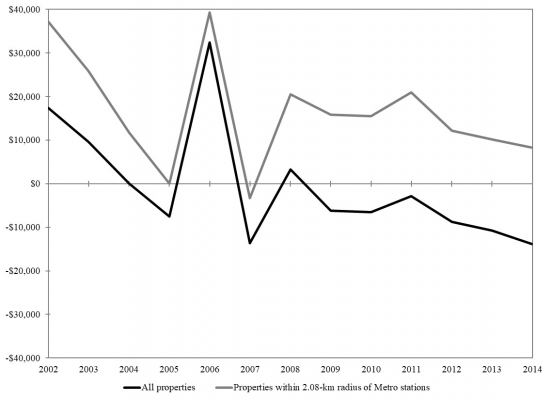 Note: This article gives the views of the author, and not the position of USAPP – American Politics and Policy, nor the London School of Economics.

Edmund Zolnik – George Mason University
Edmund Zolnik, Ph.D. is an associate professor in the Schar School of Policy and Government at George Mason University. He received his doctorate in economic geography from the University of Connecticut and his research interests are sustainable transportation and regional development. Look for his scholarly publications in the Journal of Transport Geography, Applied Geography, Regional Studies, Urban Studies and Environment and Planning A: Economy and Space.