Borovets in Bulgaria is the cheapest place in Europe for Britons to take a ski holiday this winter, a new study has revealed.

It produced a table of best-value European resorts for British skiers, with another Bulgarian resort – Bansko – placed second.

The most expensive place in Europe to go skiing is the Swiss resort of Zermatt. 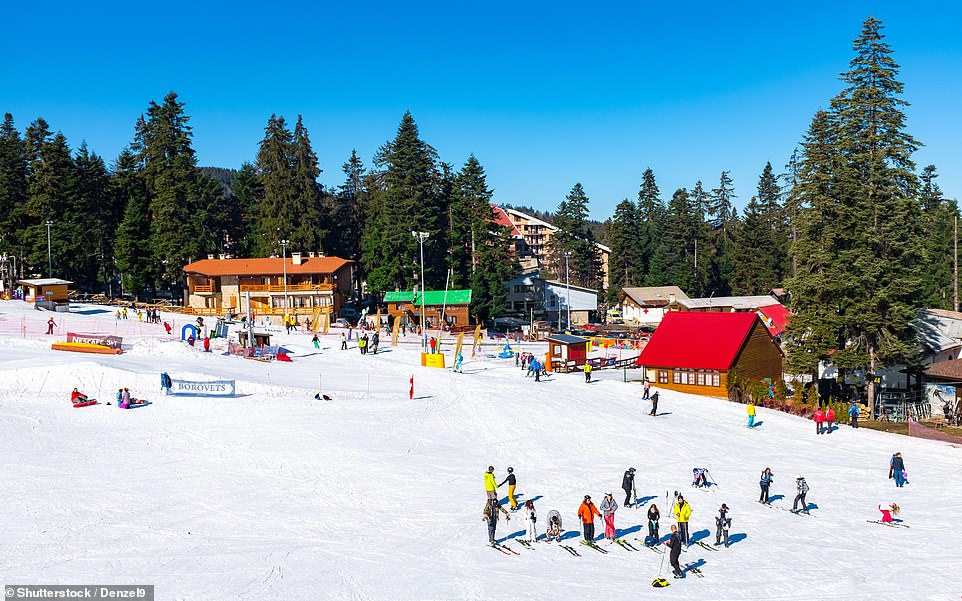 Borovets in Bulgaria, pictured, is the cheapest place in Europe to go skiing this winter, a new report by Post Office Travel Money has revealed

The ranking was revealed in the 13th annual Post Office Travel Money ski resort report, which is produced in partnership with Crystal Ski Holidays.

To compile the list, researchers looked at the prices in 30 popular resorts of ski essentials such as equipment hire, lift passes, ski tuition, lunch on the slopes and a range of drinks.

The two Bulgarian resorts were both significantly cheaper than any eurozone destination but the lower cost of lunchtime meals allowed Borovets (£448) to pip Bansko (£453) to the top spot.

Third-placed Bardonecchia (£483) is the eurozone’s best value resort and boasts the lowest price for skiing (lift pass, equipment hire and tuition). At £332, the Italian resort was around five per cent cheaper than either of its Bulgarian competitors.

However, the higher cost of meals and drinks in Bardonecchia – £151 for one week compared with £98 in Borovets and £104 in Bansko – makes it slightly more expensive overall than the two Bulgarian resorts. 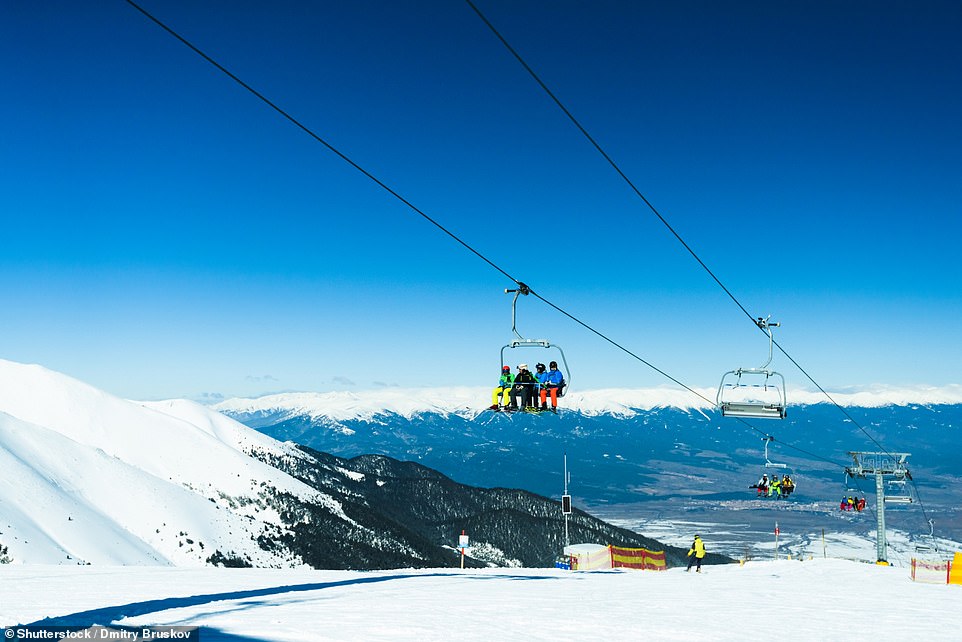 The second-cheapest place to go skiing is Bansko, pictured, another Bulgarian resort. Costs here total £453 for a week

Kranjska Gora (£553) has slipped to fourth place after prices rose 22.5 per cent because of a hefty increase in ski school costs this season.

In previous reports, the Slovenian resort boasted the cheapest prices for tuition and was even rated best value overall in 2017.

Prices have risen in 18 of 21 resorts that were also surveyed last year but this is not because of the sterling exchange rate.

The pound is stronger currently than a year ago against all European currencies, which has helped to mitigate the increase in costs for UK visitors.

The ranking has been revealed in the 13th annual Post Office Travel Money ski resort report, which is produced with Crystal Ski Holidays. Pictured is a table showing the 10 cheapest resorts

As a result, only four of the 19 resorts where prices have risen have registered increases of 10 per cent or more. Aside from Kranjska Gora, these are Vemdalen (18.3 per cent), Bansko (11.8 per cent) and La Thuile (10 per cent).

Only three resorts have seen prices fall. In Norway, researchers surveyed prices in Hemsedal (11th, £620) and found that they were over 25 per cent cheaper than Trysil, the resort that featured in the 2018 report.

Saas Fee is one of three Swiss resorts surveyed to rate among the most expensive resorts.

To compile the list, researchers looked at the prices of ski essentials such as equipment hire, lift pass, ski tuition, lunch on the slopes and a range of drinks

However, along with Cervinia (1.4 per cent), the barometer increases found by researchers in Zermatt (1.6 per cent) and Wengen (1.2 per cent) were the lowest among the 18 resorts where prices had risen.

Ellmau in Austria (£570, 7th) and Vemdalen in Sweden (£608, 8th) are the only resorts to break the stranglehold of Eastern Europe and Italy on the 10 best-value places in the table.

France again failed to gain any top 10 places with Morzine (£635) highest-placed in 12th position. Of the seven French and seven Austrian resorts surveyed, only Ellmau and Morzine were placed in the top half of the table. 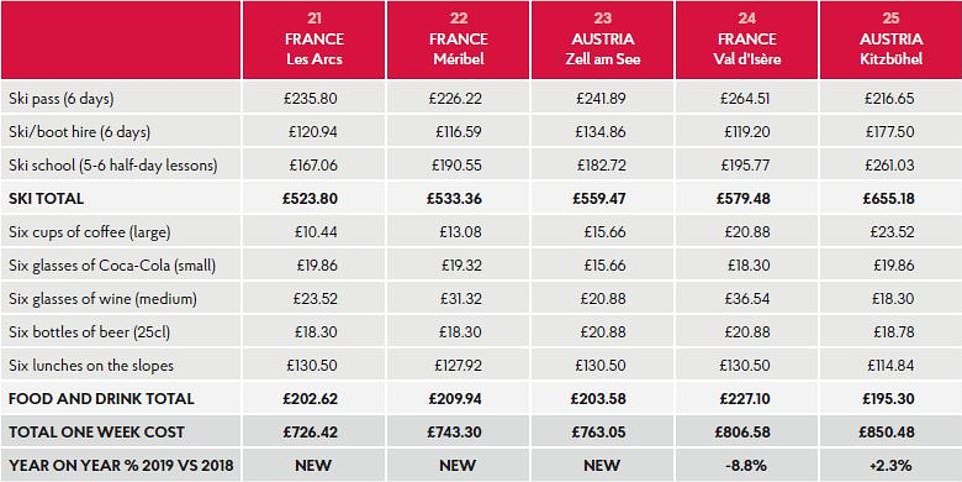 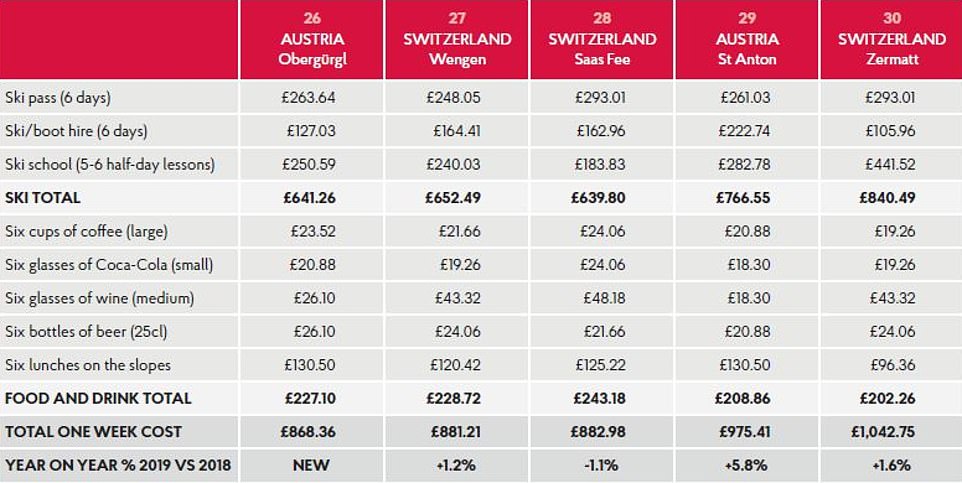 A table showing the most expensive ski resorts in Europe, which can be found in both Austria and Switzerland 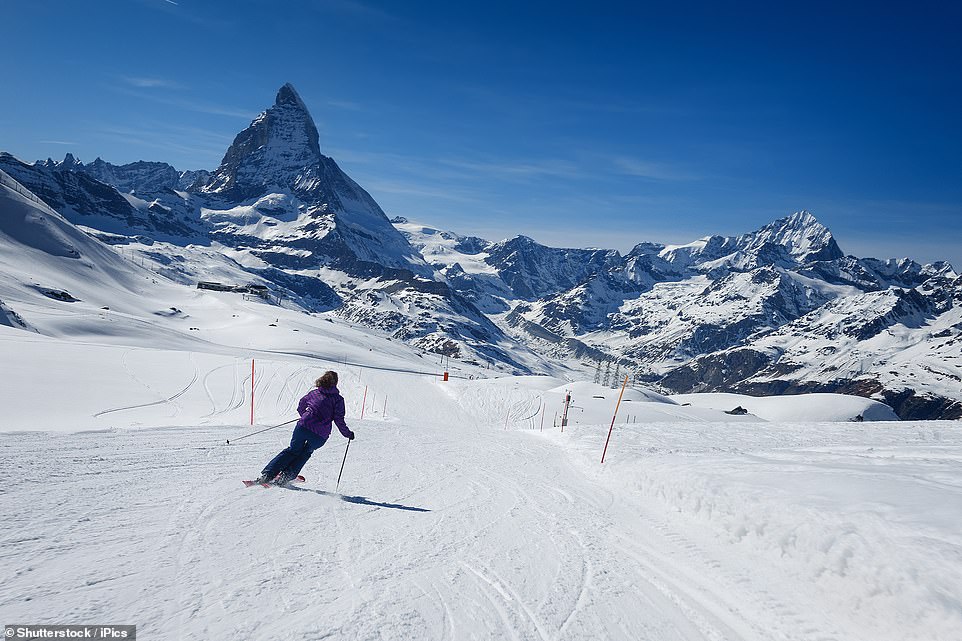 The most expensive place in Europe to go skiing is the Swiss resort of Zermatt, pictured. Researchers say the cost of a week here is £1,042.75 on average 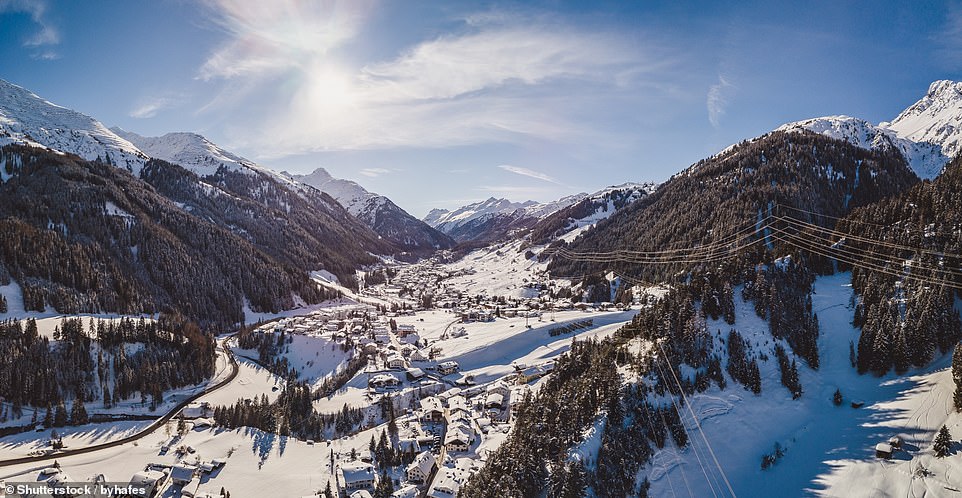 Nick Boden, head of Post Office Travel Money, said: ‘Consumer research shows that resort costs are a big concern for British holidaymakers and this makes it doubly important to do some homework before booking a ski holiday because the price of lift passes, equipment hire and tuition can vary by hundreds of pounds.

‘Despite rising prices in many resorts, there are great value options to choose from in Eastern Europe, while Italy is the obvious choice for bargain hunters in the eurozone and will appeal to skiers who prefer to head to the slopes in one of the long-established favourites.’

While Chris Logan, Crystal Ski Holidays managing director, added: ‘The report shows that, despite barometer prices rising year-on-year, there is good value news for British skiers. Bulgaria is known for being a great value destination for ski so it’s no surprise that Borovets and Bansko are in the top spots for this season.

‘Our customers will be pleased to see a decrease in costs in Val’d’Isere, which remains enduringly popular, and Italy continues to be more affordable for price-conscious customers across a variety of resorts. As well as Bardonecchia and Sestriere, La Thuile is a particular favourite for Crystal Ski Holidays customers.’