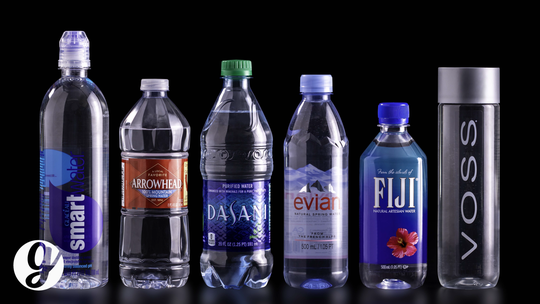 Over the past 42 years, bottled water has played a large role in the decline of fluid milk consumption. (Photo: (Binary data 27 bytes, use -b option to extract))

DE PERE – What have consumers in the United States chosen to drink instead to cause annual per capita sales of fluid milk to drop from 247 pounds in 1976 to 154 pounds in 2018?

The answer to that question was provided by Dairy Farmers of Wisconsin Vice-President for Insights and Strategy Jen Walsh to members of county dairy promotion groups at their annual regional conference.

On the cutback in the consumption of fluid milk during past 42 years, bottled water accounted for 53 percent of the change in volume despite the ready availability of tap water, the sourcing of much of the bottled water from tap water, and the environmental concerns about the disposal of billions of plastic bottles every year, Walsh reported.

The percentages for other beverages in replacing milk consumption were 11 for coffee, 8 for tea, 7 for juices, 6.6 for plant-based drinks (the equivalent of 70 million gallons of milk or less than one day’s production in Wisconsin), 6 for sports drinks, and a total of 8 percent for other drinks, she noted.

Despite that trend, dairy milk is still found in 93 percent (or 115 million) of the households in the United States, Walsh pointed out. However, the non-dairy “milk” products which account for 8.8 percent of retail sales can be found in 45 percent of the nation’s households, she indicated.

Non-dairy “cheese” has enjoyed a 400 percent sales boom over the past five years but its retail total was 7.7 million pounds in 2018 while the nation’s production of dairy cheese topped 12 billion pounds in the year, Walsh observed. “The non-dairy is a tiny amount but we cannot ignore it.” 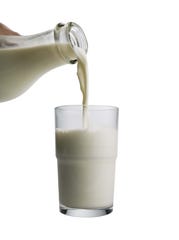 Despite the uptick in sales of non-dairy drink alternatives, dairy milk is still found in 93 percent (or 115 million) of the households in the United States. (Photo: Jupiterimages)

Walsh, who has been the DFW since 2015 and who has specialized in consumer research for 20 years, reported extensively on a survey of 800 consumers age 15 to 73 who were assigned to four different age groups for analysis. She said the focus of the survey was on the perception of nutrition and what it means to be “sustainable.”

When presented with labels (not naming the product) on almond “milk” and 1 percent butterfat dairy fluid milk and asked to compare them for nutritional value, 72 percent picked the almond as the most nutritious, Walsh noted. This was probably due to calorie count and the sugar (lactose) in milk while the high protein value of the milk was overlooked, she suggested. “There’s an attitude for avoiding bad things.”

Once the products were identified for those in the survey, the responses changed, Walsh pointed out. Then the dairy product got the most favorable ratings on all of the compared items, she stated. “That speaks to the halo that dairy has.”

In addition to having at least one-third of the survey takers giving the wrong answer when a correct one seemed to be obvious, confusion reigned on the responses to calcium because the almond products are being heavily fortified with calcium, Walsh indicated. 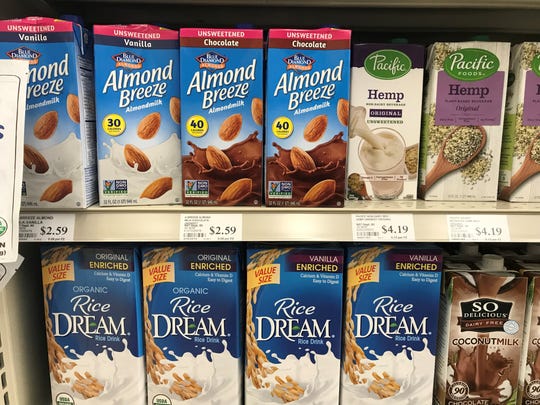 The dairy product used in a consumer survey has four ingredients compared to the 12 for the almond product – many of which are terms that very few people recognize. (Photo: Colleen Kottke/Wisconsin State Farmer)

For the cheese portion of the survey, the responses were closely balanced on overall nutrition value, Walsh said. One item which was probed was the health concern about additives to the non-dairy cheese and how they related to the food being “natural” or contributing to “sustainability,” she indicated.

Although up to two dozen factors were listed on what constitutes “sustainability,” Walsh emphasized that “sustainability is becoming a more important factor” in food choices, especially among the youngest groups. She cited an oat-based beverage in Sweden which touts environment benefits such as reductions in the use of energy and in the release of gases to the atmosphere.

While some consumers view environmental factors as more important than nutrition in making food purchases, what stands out in the surveys is that 45 to 50 percent in the four age groupings give a “don’t know” response in choosing between products based on environmental effects, Walsh reported. “That’s an opportunity for us.”

For example, cheese labels could be revised to emphasize that it consists of only three ingredients, Walsh suggested. “I see a lot of opportunity on what people don’t know.”

As to what’s ahead, Walsh called for new research on where people contain the information from which they form their beliefs and attitudes. For their part, she said dairy promoters need to present their message in person at events and in stores along with giving attention to websites and the social media venues.

Building your personal brand on LinkedIn does not have to feel like swimsuit shopping, we promise. Here’s how to do it.